Quality of life in China 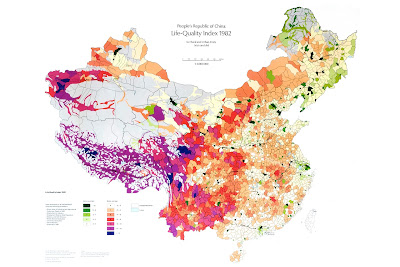 One of the important developments in efforts to measure economic progress has been the creation of various measures of quality of life.  Average income by itself is not a good indicator of wellbeing; instead we need to have a way of assessing the health, nutrition, and education status of a population over time.  The Human Development Index is one such measure, developed by the United Nations Development Programme. (Here is the 2011 report -- Human Development Report 2011: Sustainability and Equity: Towards a Better Future for All, and here is a resource describing the methodology associated with the index.) A defect in many such efforts is the fact that they are assessed at the country level, so internal regional variations in quality of life are not observable.

Walter H. Aschmoneit provided a truly fascinating effort in 1990 to provide a disaggregated study of quality of life in China circa 1982. The research is contained in Delman, Ostergaard, and Christansen, Remaking Peasant China: Problems of Rural Development and Institutions at the Start of the 1990's and the map that he constructs is represented above.

Aschmoneit incorporates eight factors into his index of life quality (205):
The data Aschmoneit uses to populate this index for the local administrative units (xian and shi) into which the Chinese population was divided derive from the 1987 Population Atlas of China (collected in 1982).  There were 2,378 administrative units represented in the study.  This means the data reflects the period shortly after the beginning of the reform of agriculture which led to China's extended period of rapid economic growth.

The map displays a number of important patterns.  Low quality of life is heavily concentrated in the western half of China, with the absolutely lowest areas being the extreme southeast and western parts of the country. Sichuan is almost wholly red and brown on the map, with the exception of the hinterlands of Chengdu, indicating below-average quality of life throughout the province. Yunnan and Tibet are almost uniformly substantially below average (purple and blue) in quality of life.  Areas of high quality of life are generally coastal in 1982, with the lower Yangzi Delta, Shandong, and the coastal northeast doing the best. The city of Wuhan in Hubei shows up as an above average district for quality of life, reflecting its advantaged position on the Yangzi River.  The environs of Beijing also show up as a high quality of life district. And in fact many of the isolated green districts appear to correspond to cities of various sizes; extreme poverty was primarily a rural phenomenon in China. (I haven't been able to identify all of the isolated green districts on the map in eastern China, but a number of them are significant cities like Wuhan, Changsha, Hangzhou, and Nanjing.  It would be interesting to determine whether there are exceptions: rural districts with high quality of life.)

There is a fairly close correspondence between this quality of life map and William Skinner's representation of the macroregions of China: 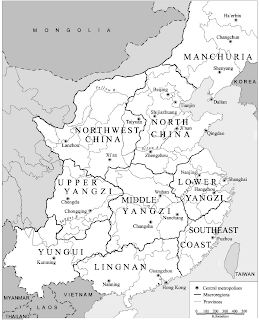 The regions of Lingnan, Southeast Coast, Lower Yangzi, and North China have the highest quality of life, while Upper Yangzi, Northwest China, and Yungui have the lowest.

Today it would be possible to present this data in the form of an interactive map, so the reader would be able to click on a specific place and view its data. This would be of interest because the index combines income data with longevity and education data. So the poverty of a region already gives it low quality of life, irrespective of the performance of the human development characteristics.  It would be interesting to see whether the most extreme districts with low quality of life are uniformly disadvantaged, or perhaps have a mix of better and worse health or education outcomes.

It would be genuinely interesting and important to reproduce this study today to see whether the basic pattern has changed through these decades of intensive economic growth and the acceleration of inequalities in China. If the 2011 Census includes the same data categories this would be a reasonably straightforward effort.  One would expect that the quality of life has gone up in the eastern and southern coastal areas. And it is very possible that quality of life has gone down in rural areas in the interior and the west of China as inequalities have increased and state subsidies have decreased for poor rural areas.

Remaking Peasant China is a book worth owning, not least for the Life-Quality Index map that it provides. The articles are well designed to address some of the key issues that China faced in rural development in the 1980s and 1990s. The book also includes as front paper a map of rural poverty areas at the xian level receiving national support 1986-1990, which gives a visual impression of the distribution of high-poverty areas in the late 1980s. Extreme poverty is defined as regions with more than 40% of rural households with annual per capita income below 150 yuan in 1985. (The map also represents xian with extremely low annual rainfall.) This map was also based on Aschmoneit's research.

a small correction/addition to your interesting post on quality of life in China: the HDI is not only available on country level; regional data do exist, see here for example: http://wp.me/pd52p-7HJ

Would including whether you can see the sun, breathe the air, drink the water (some of which admittedly might change the death rate, which is included), or not be awakened at midnight to start a 12-hour shift (http://www.nytimes.com/2012/01/22/business/apple-america-and-a-squeezed-middle-class.html?pagewanted=all ) alter the rankings?

Why would this be important?