Who made Wittgenstein a great philosopher?  Why is the eccentric Austrian now regarded as one of the twentieth century's greatest philosophers? What conjunction of events in his life history and the world of philosophy in the early twentieth century led to this accumulating recognition and respect?

We might engage in a bit of Panglossian intellectual history ("everything works out for the best!") and say something like this: The young man Wittgenstein was in fact exceptionally talented and original, and eventually talent rises to the attention of the elite in a discipline or field of knowledge. But this is implausible in even more ordinary circumstances. And the circumstances in which Wittgenstein achieved eminence were anything but ordinary. His formal training was in engineering, not philosophy; his national origin was Austria, not Britain; his early years were marked by the chaos of the Great War; his personality was prickly and difficult; and his writings were as easily characterized as "peculiar" as "brilliant".

The idea of a "field" introduced by Bourdieu in The Field of Cultural Production is particularly helpful in addressing this topic. (Here is a post that discusses the idea of a field; link.) The field of philosophy at a given time is an assemblage of institutions, personages, universities, journals, and funding agencies.  The question of whether an aspiring young philosopher rises or languishes is a social and institutional one, depending on the nature of his/her graduate program, the eminence of the mentors, the reception of early publications and conference presentations, and the like.  Indicators and causes of rising status depend on answers to questions like these: Are the publications included in the elite journals? Are the right people praising the work?  Is the candidate pursuing the right kinds of topics given the tastes of the current generation of "cool finders" in the profession? This approach postulates that status in a given profession depends crucially on situational and institutional facts -- not simply "talent" and "brilliance". And in many instances, the reality of these parameters reflexively influence the thinker himself: the young philosopher adapts, consciously or unconsciously, to the signposts of status.

Neil Gross's biography of Richard Rorty (Richard Rorty: The Making of an American Philosopher) provides a great example of careful analysis of a philosopher's career in these terms (link). Gross provides a convincing account of how the influence of the field's definition of the "important" problems affected Rorty's development, and how the particular circumstances of the Princeton department affected his later development in an anti-analytic direction.  Camic, Gross, and Lamont provide similar examples in Social Knowledge in the Making, including especially Neil Gross and Crystal Fleming's study of the evolution of a conference paper.

So what was the "field" into which Wittgenstein injected himself in his visits to Frege and Russell?  Here is a point that seems likely to me from the perspective of 2012: the "field" of analytic philosophy in 1905 was substantially less determinate than it was from 1950 to 1980.  This fact has two contradictory implications: first, that this indeterminacy made it more possible for an "oddball" philosopher to make it to the top; and second, that it made it more unlikely that talent would be consistently identified and rewarded.  The relative looseness of the constraints on the field permitted "sports" to emerge, and also made it possible that highly meritorious thinkers would be overlooked.  (So the brilliant young metaphysician studying philosophy at the University of Nebraska in 1908 might never have gotten a chance to move into the top reaches of the discipline.)

Another element is one that was highly valued in Cambridge culture -- the individual's conversational skills. Simply being introduced into a circle of eminent thinkers doesn't assure eminence. Instead, it is necessary to perform conversationally in ways that induce interest and respect. LW was apparently charismatic in an intense, harsh way. He was passionate about ideas and he expressed himself in ways that gave an impression of brilliant originality.  He made a powerful impression on the cool-finders.

And then there are his writings -- or rather, his peculiar manuscript, Tractatus Logico-Philosophicus. 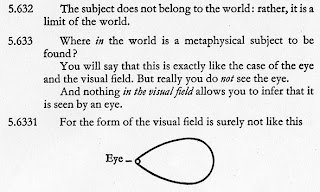 One could easily have dismissed the manuscript as a mad expression of logicism run wild, with its numbered paragraphs, its dense prose, and its gnomic expressions. Or one could react, as Russell did, with understanding and fascination. But without the reputation created by the reception of TLP, Wittgenstein would never have gotten the chance to expose the equally perplexing and challenging thinking that was expressed in Philosophical Investigations (3rd Edition).  In fact, almost all of LW's written work is epigrammatic and suggestive rather than argumentative and constructive. When there is insight, it comes as a bolt from the blue rather than as a developed line of thought.

So what if we test out this idea: a verbally brilliant man, a charismatic interlocutor, a person with original perspectives on philosophical topics and methods -- but also a figure who benefited greatly from some excellent marketing, some influential patrons, and some situationally unusual lucky breaks. Had Russell been less patient, had publishers found TLC too weird for their liking, had Moore been less open-minded about Wittgenstein's PhD defense -- then analytical philosophy might no longer remember the name "Wittgenstein". This interpretation of Wittgenstein's stature suggests something more general as well: there is an enormous dollop of arbitrariness and contingency in the history of ideas and in the processes through which some thinkers emerge as "canonical".

Anat Biletzki and Anat Matar provide an excellent introduction to Wittgenstein's philosophy in the Stanford Encyclopedia of Philosophy (link).

Prof. Little, it seems to me that the insights you come to in this post bear strong resemblances to Merton's "Matthew effect" as well as Duncan Watt's research on the randomness (and path dependence dynamics) of pop music chart success.

But this is the first time I've seen this line of thinking applied to intellectual schools of thought, as well as to intellectual figures. The implications of your post are disturbing...

(i.e. "how do we *really* know that Max Weber was that brilliant? how do we know that he wasn't just a product of luck and favorable socioeconomic background?" etc.)

While it's almost certainly the case that the peculiar individual known as Wittgenstain needed something like the peculiar environment of Cambridge and of early 20th century Analytical philosophy in which to flourish, I think the question of Wittgenstein's philosophical influence is considerably more complicated than that.

Wittgenstein himself expressed the fear that he would mostly be remembered for having introduced a certain jargon into philosophical discourse. It is not immediately obvious that his fears were not realized.

On the other hand, some of the most accomplished philosophers who followed him (see e.g. Stanley Cavell) have found much more than mere jargon in the "language games" that constitute much of the later Wittgenstein's "epigrammatic and suggestive" work. Engagement with Wittgenstein has called forth some of the best philosophy written in English since his passing.

And it's also notable that this fate--of writing epigrammatic and suggestive philosophy rather than argumentative and constructive philosophy, of being at perpetual risk of misunderstanding, not least by putative followers, and yet of proving enormously provocative to other philosophers of high caliber and accomplishment--is not exactly unique to Wittengenstein. It could be said also of Heidegger, of Nietzsche, and of (believe it or not) Emerson.

This is right as far as it goes, but so what?

It seems to be part of a trend in social thought to discount the power of ideas, despite the evidence of their power.

So, take for sake of example, Wittgenstein's truth tables in The Tractatus; are you maintaining that their catching on was due not to their value but rather instead to his brilliance as a conversationalist and his being socially well placed? Are you further maintaining that somebody else would have thunk those thoughts or that their utility was a social construction of his social position and charisma?

Howie, thanks. No, I wouldn't say that the technical device of the truth table is without value. My claim is simply about the oeuvre and the figure -- why this particular philosopher was swept to the pinacle of the profession, whereas he could have made the same contributions but remained relatively unknown.  It is his prestige and eminence I'm talking about here, not the validity or importance of his ideas. And I do in fact think there are important ideas in W's work. I just don't believe the ideas alone explain the eminence.

Do you have any examples of the opposite? That is, a philosopher who made contributions to the field but remains relatively unknown to this day. Or are you asking what made Witt a celebrity in his lifetime?

The fact that Wittgenstein was polemical against the status quo in philosophy, was so dismissive of vast swatches of published literature, was the other shoe aside from Russell's adulation (at least at first). What a combination: a respected insider, yet an alienated outsider.

I prefer a more "zeitgeisty" explanation in which a voice comes forward that crystalizes what a lot of people were wanting to say. "This Friend speaks my mind" as the Quakers say.

In poking hard at "traditional problems" and suggesting he could make them resolve by dissolving, he was providing much needed ammo to various camps. He was in the right place at the right time to make this difference.

As a storyteller, we can make him a creature of happenstance, or we can make him the avatar of the noosphere. The spin we apply depends more on the eye of the beholder than mere facts on the ground. As with any success story, the outcome may be made to seem rather improbable, against the odds. That's mostly a truism. Such people seem "lucky" (it's built into the grammar).