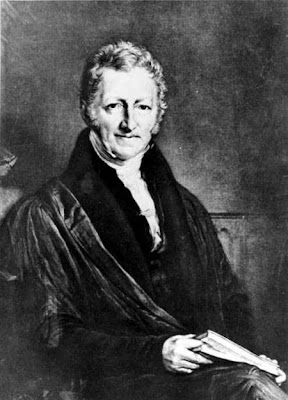 In the historical demography hall of fame there is but a single bust -- that of Thomas Malthus. (I'm joking -- there is no historical demography hall of fame.) Malthus is the theorist with the most enduring theories and hypotheses about population behavior across the world. Most central among his theories is a causal hypothesis about population change: different cultures embody significantly different mechanisms for adjusting population size to available resources. Malthus believed that Europe and Asia differed in exactly this way: the family norms of Western Europe controlled fertility according to the level of available resources, whereas the family norms of Asia controlled population size through excess mortality when resources were short. These were the preventive and positive checks that Malthus described in An Essay on the Principle of Population.


The most basic importance of the Eurasian Population Project is precisely its refutation of Malthus's core theory. (The Coursera offering described earlier in a post on "A New History for a New China" provides a good introduction to the EPP; link.) EPP scholars have demonstrated that there is no fundamental difference in the population dynamics of Europe and Asia, at least along the lines postulated by Malthus. The first set of findings of this group are presented in Life under Pressure: Mortality and Living Standards in Europe and Asia, 1700-1900 [2004].

[Our study] is an international comparison of short-term mortality responses at the microlevel in past times…, designed to improve our understanding of the individual and family demographic responses to social and economic pressure. Its hallmarks are geographic breadth, temporal depth, and detailed longitudinal data. It examines not just one people, but a variety of micro-populations in West Europe and East Asia; not just one period, but a period of 80 to 150 years, largely from the nineteenth century; not just one community but one hundred communities with 2.5 million longitudinally linked individual-level records; and not just mortality, the subject of this book, but in later volumes of this series, the entire range of demographic behavior, including reproduction, nuptially, and migration. (4)

In particular, there is evidence from sites across Asia that demonstrate a mortality responsiveness to changing economic circumstances that is highly similar to that found in Western European sites. And specifically on Malthus' view of Asian demographic behavior:

There is a crucial methodological assumption that distinguishes the EPP approach from traditional historical demography. This has to do with its focus on communities rather than national populations.

Our focus on comparison of communities, not countries, represents a new approach to social science history. While we generalize about certain aspects of human behavior, we do so within the cultural, economic, and historical contexts of specific communities, not at the national level. In contrast with the dominant thrust in academic research, we ignore contemporary nation-state boundaries and standard historical chronologies. Thus while our results illuminate the behavior of specific Belgian, Chinese, Italian, Japanese, and Swedish populations identified in map 1.1 from the early eighteenth to the early twentieth century, we draw from them implications for the demography not of specific countries, but of social and economic systems. This strategy of comparing individual contexts rather than countries avoids the problem of representativeness normally inherent in community studies. (7)

The research programme that holds together the numerous local projects encompassed by the Eurasian Population Project is innovative and important. It frames a significantly new way of designing research into large-scale social processes extended over a long period of time.

At the same time, it seems fair to ask whether the data currently available through the EPP is broad enough to achieve the group's ambitious goals. The studies of each site are very data-rich; but there is of necessity only a very limited number of sites that will receive this kind of intensive data collection and analysis. Let's assume that the effort results eventually in two dozen careful local inquiries from Sweden to Japan. This is only a minuscule selection of sites from the universe of possibilities. So what makes us think that the patterns and processes that are identified in these studies are actually more general features of the totality of demographic behavior?

The answer we give to this question seems to depend quite a bit on our background assumptions about social variation. How much variability is there across Scandinavia, North China, or Japan when it comes to social and political arrangements, marriage institutions, and economic institutions? If we think that most of the institutional arrangements show a lot of variation, then it is hard to justify the idea that one or two careful local studies will be good indicators of the more regional patterns. If, on the other hand, we think that the relevant institutional arrangements are substantially more widespread and stable, then the local studies are more likely to be reliable as indicators of larger regional patterns.

James Lee, Cameron Campbell, and Wang Feng conclude their essay on comparative mortality patterns with this nuanced statement that highlights both variation and universality:

In spite of the popularity of convergence theory, human society remains divergent, a product of specific historical processes. This divergence transcends national boundaries between the northeast Asian and northwest European communities, respectively, but persists between continental boundaries. The irony, of course, is that while the Eurasian Project is an initial step to produce a non-national history based on individual data, not aggregate data, written at the community level, not the country level, our preliminary efforts to produce a social scientific history for the twenty-first century have to some extent also reconfirmed the meta-geography of the nineteenth century. (130)

I believe this approach to historical demography is one of the genuinely important innovations in the historical social sciences in quite a long time. It represents a very different way of trying to gain access to the kinds of processes and mechanisms that have led to important social outcomes in the past two centuries. And it provides a different kind of "microscope" through which to interrogate the past, one that depends on substantially larger and more collaborative research efforts by scholars throughout the world while working with a substantially more localistic conception of where the action is to be found.