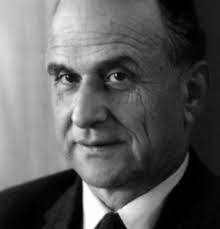 Nelson Goodman is best known within philosophy as an iconoclast within the logical empiricist tradition. He published Fact, Fiction and Forecast in 1954, offering a "new riddle of induction." Goodman was deeply interested in the arts and he argued that artistic expression is on a par with other forms of assertion and representation -- for example, in Languages of Art (1968). And his 1978 book, Ways of Worldmaking, cast doubt on the empiricist project of extracting concepts directly from experience. So Goodman was an important voice within American analytic philosophy. But he had a significant influence on me during my graduate studies in the context of a very different set of problems -- the philosophy of psychology.

Goodman taught a course titled "Philosophical Problems in Psychology" at Harvard in 1971. The course contained material from the tradition of empiricist philosophy -- Locke and Berkeley -- as well as then-current research on cognition and representation by empirical psychologists. These included Jean Piaget, Jerome Bruner, T.G.R. Bower, Ray Birdwhistell, Paul Kolers, Michael Posner, and R. W. Sperry. Goodman was interested in how perception works -- according to the philosophers and according to the psychologists. The guiding concern was this: what is the nature and origin of the conceptual systems through which human beings make sense of the world around them? The course began with an examination of the theories of perception and representation offered by Locke and Berkeley, beginning with the empiricists' critique of innate ideas, and then proceeded to contemporary efforts to analyze the same processes in real human beings.

Some of the writings of Jean Piaget played a central role in the topics and discussions of this class, including The Construction Of Reality In The Child. Goodman was interested in Piaget's efforts to chronicle the development of the child's conceptual world -- the formations through which the child makes sense of sensorimotor experience at various ages.

Another noteworthy component of the course was an extensive discussion of Paul Kolers' work on motion perception eventually published in Aspects of Motion Perception (1972). (This research was published in 1971 as "Figural Change in Apparent Motion"; link.) The phenomenon that Kolers described was a flashing pair of images that oscillated between one geometrical figure and another. The images are stationary, but the visual impression is of a smoothly moving object that changes from one shape to the other. Goodman provided a detailed and perceptive analysis of the methods and assumptions that underlaid Kolers' treatment of the phenomenon.

One idea that is pervasive throughout many of Goodman's writings is the idea of conceptual relativism. This is the key contribution of Ways of Worldmaking. The idea comes up repeatedly in the 1971 course. Here is a paragraph taken from my notes from the course that captures a lot of Goodman's own views about conceptual schemes:


Experience is always organized in one way or another. Moreover, not all ways of organizing are equally good; some work much better than others, some may be ineffectual; others may lead to internal inconsistencies. When one proves unsatisfactory, this leads to a reorganization. But doesn't this require that there be a world out there to which our schemes conform? Yes and no; no because there is no unalterable way of looking at the world in which facts about the world are expressed; but yes, within any given system of organization there are true facts about the world to which other schemata must form. The important thing here is that there is no unique "structure of the world"…. Goodman calls his point of view "neutralism" or "conceptual pluralism". (11/9/1971)

What is most impressive about this course is the fact that Goodman paid close attention to current work in psychology and the cognitive sciences. Goodman followed a philosophical method in this course that I continue to admire -- the idea that philosophical reflections about an area of science can be valuable to the degree that they are closely connected to real research problems in that area of research. This approach leans against a primary focus on big issues -- is behaviorism correct? Are there mental entities? -- in favor of more specific questions within philosophical and psychological studies of perception.

What I now find most interesting about the design of this course is the underlying assumption that philosophers and empirical scientists can find common questions where their methodologies can fruitfully interact to shed greater light on the issues.  In this case, philosophers have a lot of questions about perception and conceptual schemes; and cognitive and developmental psychologists are doing experimental and theoretical work that sheds light on exactly these issues. Finding a common vocabulary is challenging for the two research traditions, but it seems clear that the collaboration can be highly fruitful.

(Here is an interesting collection that takes seriously some of Goodman's strictures on conceptual systems from the point of view of problems in the social sciences: Mary Douglas and David Hull, eds., How Classification Works: Nelson Goodman Among the Social Sciences.) Alessandro Giovannelli's article on Goodman in the Stanford Encyclopedia of Philosophy is excellent; link. Here is an extensive bibliography of Goodman's works; link.)
Posted by Dan Little at 5:14 PM

I found this use of Goodman's idea of how categories can become entrenched really helpful. I think it was republished in the Douglas, ed. volume that you mention. The first few pages bring out the debt to Goodman.

In that Douglas volume on classifcation, I think that Ian Hacking draws from Goodman to develop his most penetrating idea of dynamic nominalism, which is meant to capture how categories become entrenched in social life and acquire a durable social reality.
Rakesh Bhandari