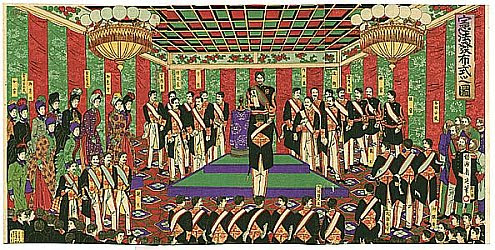 The new institutionalists have largely focused on the maintenance and evolution of major social and political institutions. So Kathleen Thelen's excellent book, How Institutions Evolve: The Political Economy of Skills in Germany, Britain, the United States, and Japan, examines the stability and change within the institutions through which skill is transmitted, Paul Pierson looks at issues of temporarily within institutional change in Politics in Time: History, Institutions, and Social Analysis, and Elinor Ostrom examines institutions through which communities solve common-property resource problems in Governing the Commons: The Evolution of Institutions for Collective Action. In each case the analysis begins with the institution already well developed.

The tools of comparative historical research have proven highly useful in the context of these sorts of questions. Thus Thelen compares roughly a century of institutional history in Great Britain, Germany, Japan, and the United States to show that the same social and economic needs of an industrial economy have been satisfied with different sets of stable ensembles of training institutions, and she is enabled to consider (and sometimes reject) common theories of how institutional change and stability occur. For example, the theory of necessary functional convergence is refuted by her study.

Another important question has not been so fully examined to date within this tradition is how major institutional innovations are invented in the first place. Here too the tools of comparison are very relevant. But the challenge is to find appropriate cases: instances where roughly similar institutions emerged in concrete historical settings where we can work backwards to trace out the structural and agentic events and processes that appear to be relevant.

For this reason the appearance of Wenkai HE's Paths toward the Modern Fiscal State: England, Japan, and China is a timely and interesting contribution. HE undertakes a comparative study of the emergence of what he calls the "modern fiscal state" in Britain, China, and Japan. He has undertaken to learn enough about these three cases in detail to be able to tell a reasonably detailed story of the emergence of this set of state tax and revenue institutions in the three settings, and he is thereby poised to consider some important institutional-causal questions about the innovations he observes. The book is a "cross-over" work, with political science methods and historical research content. The book combines new institutionalism, comparative historical sociology, and first-rate historical scholarship to make a compelling historical argument.

The subject is important for several reasons. First, as Chuck Tilly emphasized, the capacity of the modern state to increase and rationalize its ability to collect taxes is key to the extension of military and administrative power. So fiscal institution building is at the heart of modern state formation. Second, it sheds some light on the specific challenges China confronted on its road to creating a pervasive modern state at mid-19th century. Third, the granularity of the account permits rigorous explanation of some specific turning points in each nation's course of "modernization".

HE describes the path dependency of institution creation in these terms:

HE uses careful comparison of three cases to try to establish underlying causal mechanisms relevant to the invention and establishment of new centralized institutions of state revenue capture: England (1600-1630), Japan (1820-1860), and China (1820-1840).

A couple of findings are particularly interesting. One is the proximity this research has to the Tilly thesis linking war-fighting capacity and fiscal reform. HE finds that the linkage is not as direct or regular as Tilly believed in Coercion, Capital and European States: AD 990 - 1992. Another interesting finding is a refutation of the view that there is some kind of necessary logic of modernization that guided this process and determined the outcome. Instead, HE finds that there was a great deal of path-dependence and contingency in these three stories -- not a determinate process of "modernization."

The combination of detailed historical knowledge of the particulars of the cases with the theoretical structure of institutionalism, path dependency, and contingency permits HE to tell a story that is satisfying both to the historian and the historical sociologist, informing both. (This was evident in the discussion of the book that occurred at the Social Science History Association meeting in November, where experts on Japan, China, and England largely supported HE's analysis of the sequence of changes that he outlines.)

One thing that I particularly appreciate about HE's work is his ability to combine structure and agency into a single coherent analysis and explanation. He writes about this effort in his conclusion:

In particular, [this book] seeks to demonstrate how an eventful approach to historical causation can integrate agency, structure, and contingency into one coherent causal story to explain the creation of new institutions through an uncertain and interactive historical process. Where the trajectory of institutional development is determined neither by socioeconomic structure nor by agents with bounded rationalities, a careful analysis of events can help social scientists uncover a causal mechanism without resorting to oversimplification or retreating to a naive form of "history as storytelling." (180)

Isaac Martin, Ajay Mehrotra, and Monica Prasad's very interesting The New Fiscal Sociology: Taxation in Comparative and Historical Perspectiveis a valuable companion to Wenkai HE's study. Here is how Chuck Tilly summed up the ambitions of the new fiscal sociology in his preface to the volume:

Recently, a relatively small but creative group of social scientists and historians have been rectifying the long neglect of taxation in their fields. They have started to build a cross-disciplinary effort we can call fiscal sociology, with the qualification that nonsociologists provide an important part of the theory and research. Dis-playing some of the best recent work, this volume accents three major questions in the description and explanation of taxation: the social bases of tax policy, the determinants of taxpayer consent, and the social consequences of taxation. These chapters establish the vitality and importance of recent work on the social and political processes involved in taxation. (xv)