Tyler Cowen sounds a bit like Voltaire's Pangloss when he argues, as the New York Times headline puts it, that we are living "all in all, [in] a more egalitarian world" (link). Cowen acknowledges what most people concerned about inequalities believe: "the problem [of inequality] has become more acute within most individual nations"; but he shrugs this off by saying that "income inequality for the world as a whole has been falling for most of the last 20 years." The implication is that we should not be concerned about the first fact because of the encouraging trend in the second fact.

Cowen bases his case on what seems on its face paradoxical but is in fact correct: it is possible for a set of 100 countries to each experience increasing income inequality and yet the aggregate of those populations to experience falling inequality. And this is precisely what he thinks is happening. Incomes in (some of) the poorest countries are rising, and the gap between the top and the bottom has fallen. So the gap between the richest and the poorest citizens of planet Earth has declined. The economic growth in developing countries in the past twenty years, principally China, has led to rapid per capita growth in several of those countries. This helps the distribution of income globally -- even as it worsens China's income distribution.

But this isn't what most people are concerned about when they express criticisms of rising inequalities, either nationally or internationally. They are concerned about the fact that our economies have very systematically increased the percentage of income and wealth flowing to the top 1, 5, and 10 percent, while allowing the bottom 40% to stagnate. And this concentration of wealth and income is widespread across the globe. (Branko Milanovic does a nice job of analyzing the different meanings we might attach to "global inequality" in this World Bank working paper; link.)

This rising income inequality is a profound problem for many reasons. First, it means that the quality of life for the poorest 40% of each economy's population is significantly lower than it could and should be, given the level of wealth of the societies in which they live. That is a bad thing in and of itself. Second, the relative poverty of this sizable portion of society places a burden on future economic growth. If the poorest 40% are poorly educated, poorly housed, and poorly served by healthcare, then they will be less productive than they have the capacity to be, and future society will be the poorer for it. Third, this rising inequality is further a problem because it undermines the perceived legitimacy of our economic system. Widening inequalities have given rise to a widespread perception that these growing inequalities are unfair and unjustified. This is a political problem of the first magnitude. Our democracy depends on a shared conviction of the basic fairness of our institutions. (Kate Pickett and Richard Wilkinson also argue that inequality has negative effects on the social wellbeing of whole societies; link.)

The seeming paradox raised here can be easily clarified by separating two distinct issues. One is the issue of income distribution within an integrated national economy -- the United States, Denmark, Brazil, China. And the second is the issue of extreme inequalities of per capita GDP across national economies -- the poverty of nations like Nigeria, Honduras, and Bangladesh compared to rich countries like Sweden, Germany, or Canada. Both are important issues; but they are different issues that should not be conflated. It is misleading to judge that global inequality is falling by looking only at the rank-ordered distribution of income across the world's 7 billion citizens. This decline follows from the moderate success achieved in the past fifteen years in ameliorating global poverty -- a Millenium Development Goal (link). But it is at least as relevant to base our answer to the question about the trend of global inequalities by looking at the average trend across the world's domestic economies; and this trend is unambiguously upward.

Here is a pair of graphs from The Economist that address both topics (reproduced at the XrayDelta blog here). The left panel demonstrates the trend that Cowen is highlighting. The global Gini coefficient has indeed leveled off in the past 40 years. The right panel indicates rising inequalities in US, Britain, Germany, France, and Sweden. As the second panel documents, the distribution of income within a sample set of national economies has dramatically worsened since 1980. So global inequalities are both improving and worsening -- depending on how we disaggregate the question. 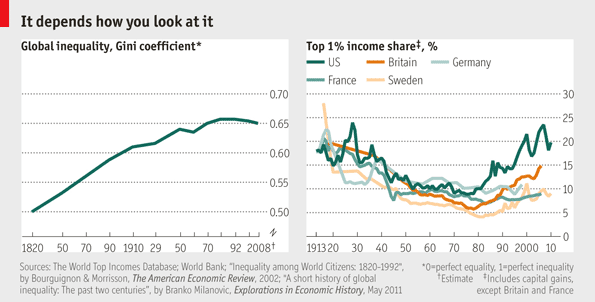 We get a very different picture if we consider what has happened with inequalities across the world's national economies. Here is a graph compiled by Branko Milanovic that represents the Gini coefficient for GDP per capita for a large set countries over time (link): 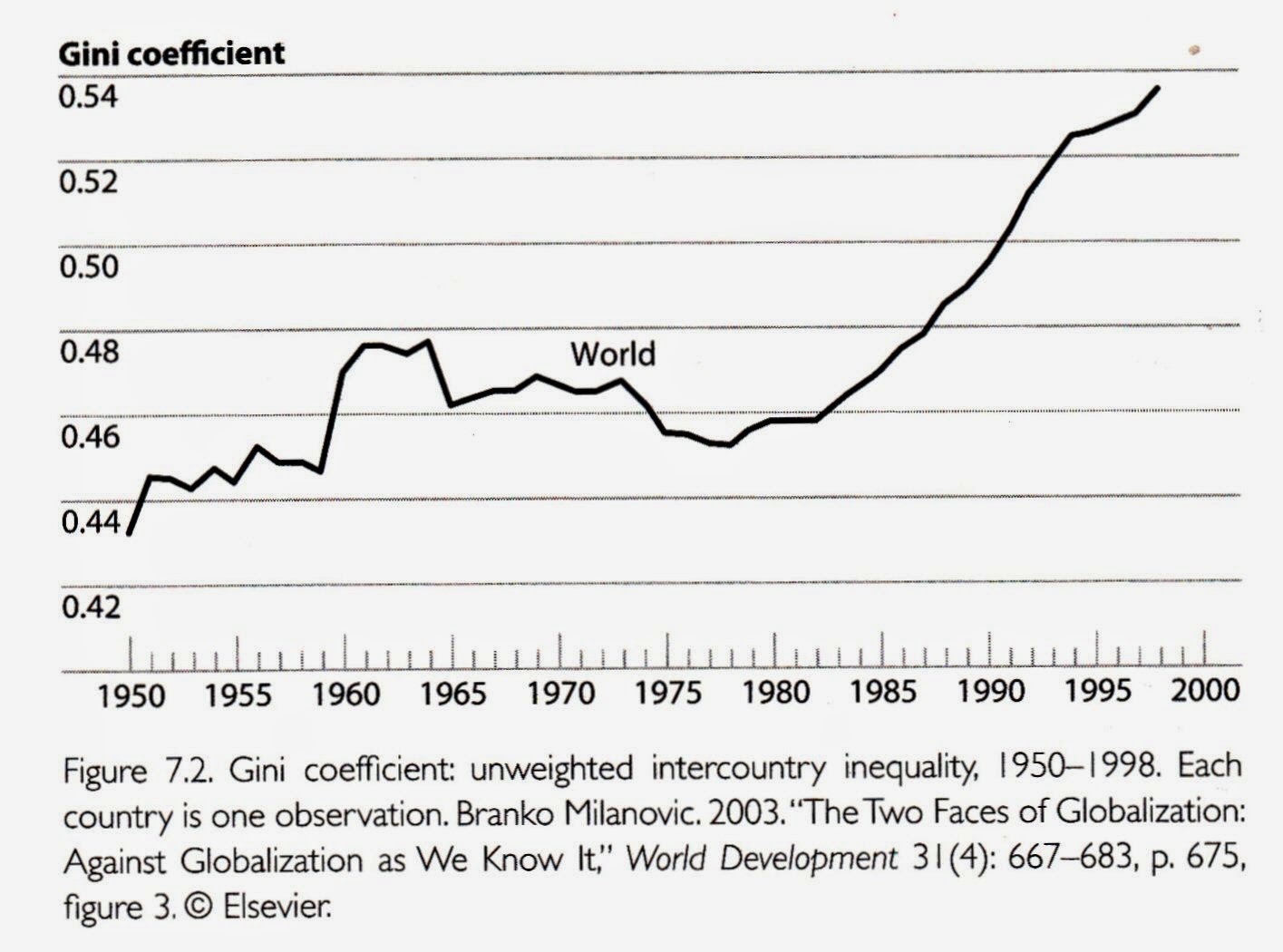 This graph makes the crucial point: inequalities across nations have increased dramatically across the globe since 1980, from a Gini coefficient of about .45 to an average of .54 in 2000 (and apparently still rising).

Finally, what about inequalities within nations? This OECD report provides comparative data for 27 countries during the period 1975 and 2010 (link). They find that income inequalities increased in most of the countries studied. This report does not cover all countries, of course; but the findings are suggestive. Here is their summary finding: 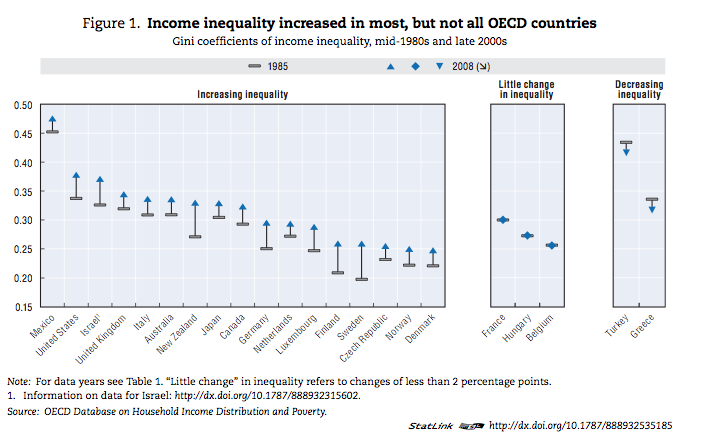 And this is the most important point: most of these countries are suffering the social disadvantages that go along with the fact of rising inequalities. So we could use the OECD report to reach exactly the opposite conclusion from the one that Cowen reaches: in fact, global inequalities have worsened since 1980.


Thomas Piketty's name does not occur once in Cowen's short piece; and yet his economic arguments about capitalism and inequality in Capital in the Twenty-First Century are surely part of Cowen's impetus in writing this piece. Ironically, Piketty's findings corroborate one part of Cowen's point -- the global convergence of inequalities. Two French economists, François Bourguignon and Christian Morrisson, made a substantial effort to measure historical Gini coefficients for the world's population as a whole (link). Their work is incorporated into Piketty's own conclusions and is included on Piketty's website. Here is Piketty's summary graph of global inequalities since 1700 -- which makes the point of convergence between developed countries and developing countries more clearly than Cowen himself: 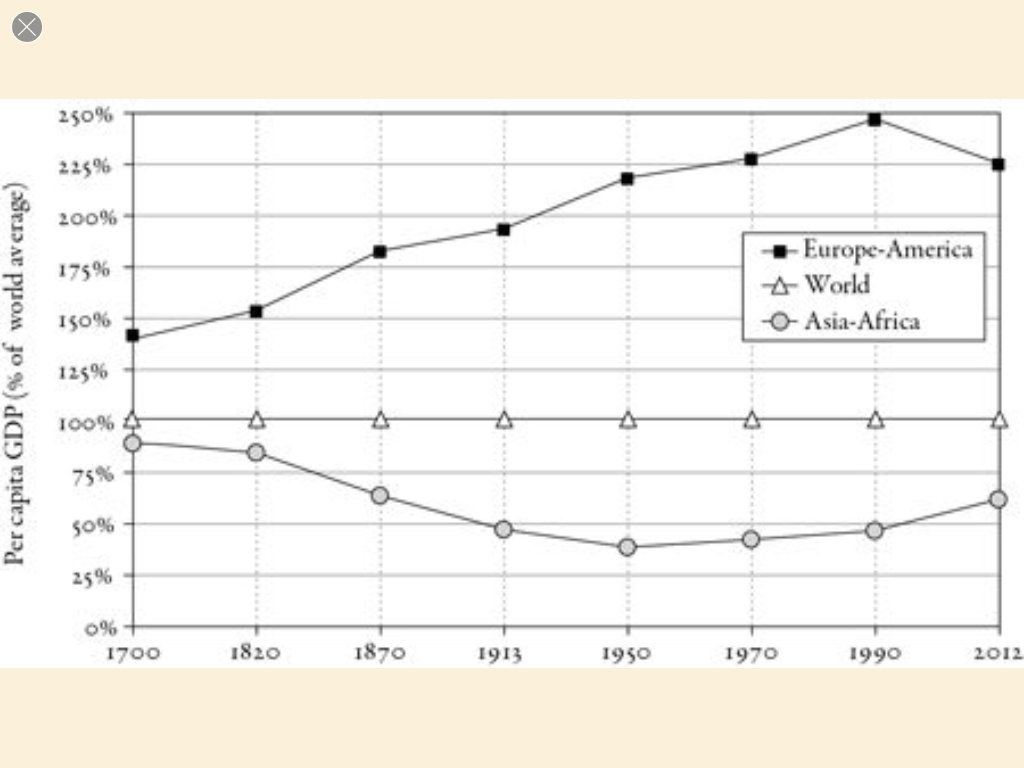 So what about China? What role does the world's largest economy (by population) play in the topic of global economic inequalities? China's per capita income has increased by roughly 10% annually during that period; as a population it is no longer a low-income economy. But most development economists who study China would agree that China's rapid growth since 1980 has sharply increased inequalities in that country (link, link). Urban and coastal populations have gained much more rapidly than the 45% or so of the population (500 million people) still living in backward rural areas. A recent estimate found that the Gini coefficient for China has increased from .30 to .45 since 1980 (link). So China's rapid economic growth has been a major component of the trend Cowen highlights: the rising level of incomes in previously poor countries. At the same time, this process of growth has been accompanied by rising levels of inequalities within China that are a source of serious concern for Chinese policy makers.

Here are charts documenting the rise of income inequalities in China from the 2005 China Human Development Report (link): 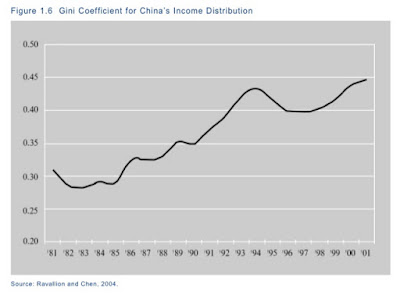 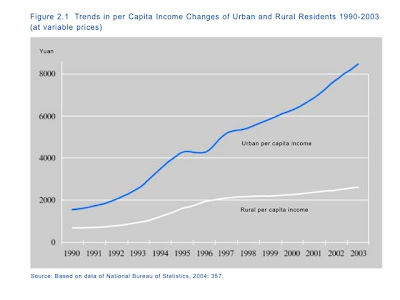 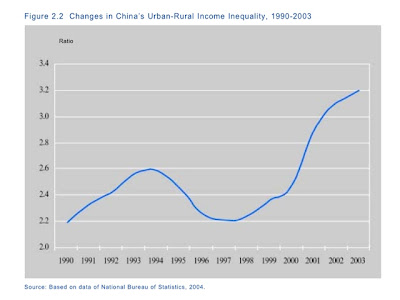 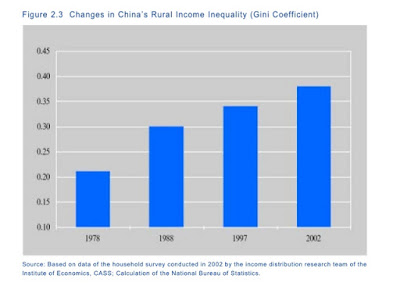 So rising global income inequality is not a minor issue to be brushed aside with a change of topic. Rather, it is a key issue for the economic and political futures of countries throughout the world, including Canada, Great Britain, the United States, Germany, Egypt, China, India, and Brazil. And if you don't think that economic inequalities have the potential for creating political unrest, you haven't paid attention to recent events in Egypt, Brazil, the UK, France, Sweden, and Tunisia.

[revised 4:00 pm 7/21/14 to correct interpretation of Milanovic graph. Thanks to Graham Webster for catching the mistake.]