An evolutionary view of research frameworks 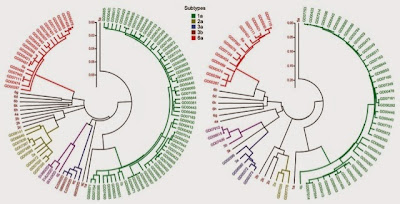 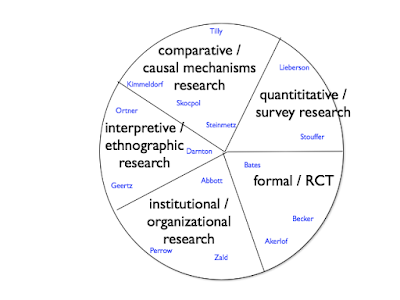 It was noted in prior posts that there is a great diversity of research frameworks in the social sciences, and that there is much to be gained by attempting to understand the social processes through which these frameworks change and develop over time (link, link).

Here is an intriguing idea. We might think of a research framework as the compound of a set of "genes" in the form of a collection of ideas and practices through which scientists approach their studies of the world. And we might define the similarity or difference between two research frameworks in the way that geneticists define the similarity of two mammalian species, in terms of the degree of shared genetic material they possess.

On this approach, the research framework (methodology) constitutes a "code" which the young scientist learns through advanced training in the discipline. The resulting body of theory and research findings is the phenotype that results from the expression of the genotype through the activities of individuals and groups of scientists within the social and political environment of the research community.

The genotype of a methodology might consist of items like these:
On this view, scientific innovation takes place when researchers modify one or more elements of the code -- background ontological beliefs, investigative practices, modes of confirmation, regulative ideas about theory and explanation. A given innovation may confer greater efficacy on the research framework by leading to more discoveries, more publications, or more funding.

By invoking the ideas of genotypes, phenotypes, and ecologies into the domain of research methodologies it is tempting to consider whether other aspects of the evolutionary paradigm are applicable as well, including the idea of evolution through selection.

Key here is the question of the mechanisms of fitness and selection that might be at work in the field of science. Do methodologies compete for survival and reproduction? Are there selection pressures at work in the domain of epistemology? Do scientific research frameworks "evolve" through small adjustments at the "gene" level (components of methodology at the level of theory and practice)? If so, do those selection processes lead to the evolution of methodologies better suited to discovering truth, or do they lead instead to methods that better serve the proximate interests of researchers and micro research communities?

One might argue that the two possibilities -- selection pressure and veridicality -- converge. Researchers use and refine methodologies based on their effort to generate publications, influence, and funding. One methodology is more "fit" than another insofar as it contributes to comparative advantage in these related outcomes. But methodologies generate influence, publication, and funding in proportion to the collective judgment of the expert community that they are creating new insight and more truthful representations of the world. So selection processes lead to greater veridicality.

This would be an agreeable outcome -- the concrete practice of science leads generally to greater levels of truthful representation of the natural and social world. But is it plausible? Or does the history and sociology of science suggest that the factors that select for research methodologies are less epistemic and more situational or political? Does the process of science favor innovations that align with received views? Do scientific careers depend more on non epistemic factors than epistemic qualities? Does the process of science favor politically acceptable findings ("fracking is harmless" rather than "fracking causes micro-seismic activity")? Are there contrarian "predator" practices at foot that actively contrive to push scientific findings away from truth (climate deniers, smoking industry advocates; Naomi Oreskes, Merchants of Doubt: How a Handful of Scientists Obscured the Truth on Issues from Tobacco Smoke to Global Warming)?

There are visible differences between biological evolution and the evolution of complexes of ideas and methods, of course. Biological evolution takes place through random variation at the genetic level, whereas theories and methods are subject to design by the scientists who develop them. Functional adaptation is the result of a blind process of selection in the biological world, whereas it is an intended consequence in the realm of theories and methods. And it is possible to define ecological fitness more precisely and mathematically in the biological realm than it is in the realm of science and culture.

It will be noted that this approach has a lot in common with the evolutionary approach to economics and the evolution of firms. A key text in this approach is Richard Nelson and Sidney Winter, An Evolutionary Theory of Economic Change. Richard Dawkins explored a similar view in The Selfish Gene when he considered "memes" as cultural counterparts to genes in the biological world.