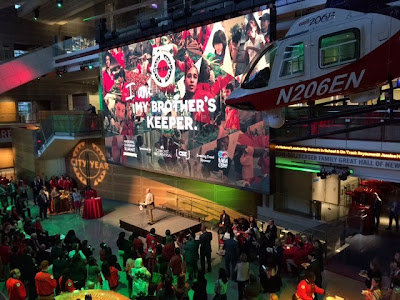 Several hundred leaders from around the country convened this week in Washington, D.C. to participate in the 2015 City Year National Leadership Summit. City Year is a national youth service organization with a focused and ambitious mission: to harness the talents of young people in service towards the goal of solving the nation's dropout crisis. Currently there are more than 2,800 young people serving on teams of 8-10 in some of our country's most difficult schools, focused on helping disadvantaged students stay in school and on track.

Making use of educational research conducted by scholars like Robert Balfanz at Johns Hopkins Center for the Social Organization of Schools, the City Year strategy is designed around a simple concept: using near-peers to help students overcome deficiencies of attendance, behavior, and course work so they have a high probability of graduating from high school. There is good quasi-experimental data to show that the intervention works. Some results of the signature "Diplomas Now" program are provided in the graphic below.

So the challenge is scale: is it possible to expand the scope of City Year's activities around the country so that the majority of our country's "dropout factories" have been addressed? The scale goals City Year has adopted are challenging but attainable: 80% of students in City Year schools will reach 10th grade on track for graduation; City Year will reach 50% of at-risk students in its communities; and City Year will expand nationally to serve the cities that account for 67% of the nation's urban dropouts.

In order to reach the scale goal it is estimated that the national City Year corps needs to increase to 10,000 young people in roughly fifty cities -- an ambitious goal substantially beyond the current level of 2,800 members in 26 cities. So the number of cities served by the organization needs to grow, and the number of schools served in each city needs to expand. And the key obstacle to reaching this goal is money. The "all-in" cost of supporting one corps member is roughly $40,000 per year. So to support a corps of 100 in a city like San Antonio or Cleveland, the local organization needs to raise about $4 million per year. Ideally there are four sources of support, roughly equal in magnitude: Americorps funds, local school funds, corporate sponsorships, and private gifts. This means the local organization needs to raise about three million dollars a year in local funds (schools, corporations, and individuals), with one million dollars in support from Americorps. And to get to scale, this goes up to about nine million dollars for cities like Detroit.

Dropout prevention through programs like City Year has a large return on investment. Throughout the summit City Year leaders and Federal and local education officials estimated that the return on keeping a student in school through graduation is roughly four times the cost of the programs that do it. So dropout prevention is a fantastic investment for society. But it requires public and private will to allocate the dollars necessary to achieve the goal.

This is a movement and a national organization that is making serious, meaningful progress towards solving one of America's most pressing problems, the failure of high-poverty schools. This situation creates one of the most enduring forms of inequality of opportunity our country faces, and it disproportionately impacts low income young people of color.

The City Year organization continues to expand the impact and scope of its program of national service for young people. City Year announced the startup of its 27th city in the United States, Dallas. Corps members in Dallas will begin having the impact on children in poverty in Dallas that their counterparts have in cities around the country.

What is genuinely appealing about the City Year effort over the past twenty-six years is its pragmatic idealism. This is the best example I know of where a grassroots organization has transformed itself into a powerful force for progress nation-wide. And the values that hold the organization together, from the national staff in Boston to the site leaders to the 2,800 corps members, are positive, democratic, and inclusive. This is the foundation for a better America. 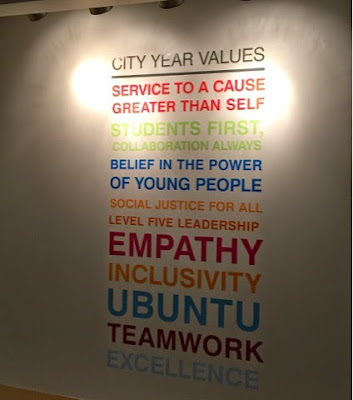 Or as City Year says to the young people of America, "Give a year, change the world!"


Here are a couple of thoughtful books on national service and Americorps as vectors of social progress:


(Policy Studies Association is a research and consulting organization that has done a good deal of program assessment for City Year; link.)
Posted by Dan Little at 2:58 PM