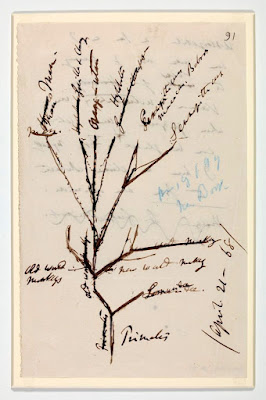 Ian Hacking has written quite a bit on the topic of "kinds" (link), beginning with "A Tradition of Natural Kinds" in Philosophical Studies in 1991 (link) and most recently with his lecture to the Royal Institute of Philosophy in 2006 (link). He is also one of the most interesting theorists of "constructivism" -- a sort of mirror opposite to the position that the world consists of things arranged in natural kinds (The Social Construction of What?). So it is worthwhile examining his view of the status of the idea of "natural kinds".

Before we get to natural kinds, Hacking thinks it is a good idea to consider an idea that emanates from Nelson Goodman in Ways of Worldmaking

, the idea of "relevant kinds". Hacking discusses this concept at length in Social Construction (128 ff.). Fundamentally the idea of a relevant kind is an ontologically non-committal interpretation of concepts; it is a contingent and interest-driven way of classifying things in one way rather than another.


Uniqueness. There is a unique best taxonomy in terms of natural kinds, that represents nature as it is, and reflects the network of causal laws. We do not have nor could we have a final taxonomy of anything, but any objective classification is right or wrong according as it captures part of the structure of the one true taxonomy of the universe. (111)

Hacking traces the language of kinds and natural kinds to J. S. Mill and John Venn in the middle of the nineteenth century. He quotes Peirce's effort to improve upon Mill's definition of natural kinds, based on the idea that the objects encompassed within a kind have important properties that are naturally related to each other:

The following definition might be proposed [for 'real kind']: Any class which, in addition to its defining character has another that is of permanent interest, and is common and peculiar to its members, is destined to be conserved in that ultimate conception of the universe at which we aim, and is accordingly to be called 'real'. (119)

Here is how Hacking distinguishes between Mill and Peirce:

In the 2006 article Hacking offers a clear definition based on William Whewell's reasoning:

A kind is a class denoted by a common name about which there is the possibility of general, intelligible and consistent, and probably true assertions. (13)

And here is his reading in 2006 of John Venn's view of natural kinds:

‘There are classes of objects, each class containing a multitude of individuals more or less resembling one another [...]. The uniformity that we may trace in the [statistical] results is owing, much more than is often suspected, to this arrangement of things into natural kinds, each kind containing a large number of individuals.’ (17)

Now let's turn to Hacking's views fifteen years later in "Natural Kinds: Rosy Dawn, Scholastic Twilight" (link). This piece extends his historical analysis of the evolution of the concept, but here Hacking also lets us know more clearly what his own view is on natural kinds. He argues for two fundamental theses:
The first is a declaration about the world: the world does not divide into distinct categories of things, as postulated in the uniqueness principle above. The second is a declaration about a philosophical tradition: the line of thought he scrutinizes leading from Mill through Peirce and Russell to Kripke and Quine has led to irresolvable inconsistencies. The topic has become a degenerating research programme.

Also interesting is Richard Boyd's "homoeostatic property cluster kinds", a concept that seems to apply best in evolutionary biology. Boyd's view appears in "Realism, Anti-Foundationalism and the Enthusiasm for Natural Kinds" (link), a response to Hacking's 1991 article.  Hacking summarizes Boyd's view in these terms: "In his analysis, kinds, and in particular species, are groups that persist in a fairly long haul. The properties that characterize a species form a cluster. No distinctive property may be common to all members of the species, but the cluster is good for survival" (30).

So what is Hacking's view, all things considered? He is fairly consistent from 1991 to 2006. Hacking's view in 1991 seems to have a pragmatist and anti-realist orientation: things are organized into kinds so as to permit human beings to use and manipulate them. Kinds, uses, and crafts are intimately related.

And in 2006 he ends the discussion with this conclusion:

So Hacking's view is a kind of conceptual constructivism. We construct schemes of classification for various pragmatic purposes -- artisanship, agriculture, forest and wildlife management. Schemes have advantages and disadvantages. And there is no definable sense in which one scheme is uniquely best, given everything that nature, biology, and society presents us with.

I've argued for a long time that there are no "social kinds" (link). My fundamental reason for this conclusion is somewhat different from Hacking's line of thought: I emphasize the fundamental heterogeneity and plasticity of social objects, leading to the result that there is substantial variation across the members or instances of a social concept (state, revolution, riot, financial crisis). Social things do not have essential natures, and they do not maintain their properties rigidly over time. So we are best advised to regard sociological concepts in a contingent and pragmatic way -- as nominal schemes for identifying social events and structures of interest, without presuming that they have fundamental and essential properties in common.