Rationality over the long term 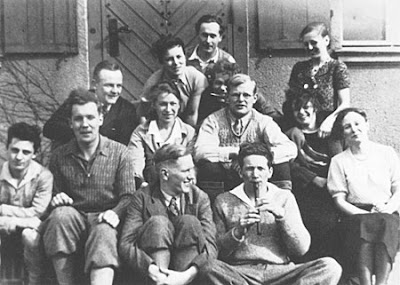 image: Dietrich Bonhoeffer with his students

Millions of words have been written on the topic of rationality in action. Life involves choices. How should we choose between available alternatives? Where should I go to college? Which job should I accept? Should I buy a house or rent an apartment? How much time should I give my job in preference to my family? We would like to have reasons for choosing A over B; we would like to approach these choices "rationally."

These are all "one-off" choices, and rational choice theory has something like a formula to offer for the decider: gain the best knowledge available about the several courses of action; evaluate the costs, risks, and rewards of each alternative; and choose that alternative that produces the greatest expected level of satisfaction of your preferences. There are nuances to be decided, of course: should we go for "greatest expected utility" or should we protect against unlikely but terrible outcomes by using a maximin rule for deciding?

There are several deficiencies in this story. Most obviously, few of us actually go through the kinds of calculations specified here. We often act out of habit or semi-articulated rules of thumb. Moreover, we are often concerned about factors that don't fit into the "preferences and beliefs" framework, like moral commitments, conceptions of ourselves, loyalties to others, and the like. Pragmatists would add that much mundane action flows from a combination of habit and creativity rather than formal calculation of costs and benefits.

Here I want to look more closely than usual at what is involved in reflecting on one's purposes and values, formulating a plan for the medium or long term, and acting in the short term in ways that further the big plan. My topic is "rationality in action", but I want to pay attention to the issues associated with large, extended purposes -- not bounded decisions like buying a house, making a financial investment, or choosing a college. I'm thinking of larger subjects for deliberation -- for example, conquering all of Europe (Napoleon), leading the United States through a war for the Union ( Lincoln), or becoming a committed and active anti-Nazi (Bonhoeffer).

The scale I'm focusing on here corresponds to questions like these:
What these examples have in common is large temporal scope; substantial uncertainties about the future; and extensive intertwining of moral and political values with more immediate concerns of self-interest, prudence, and desire. Moreover, the act of formulating plans on this scale and living them out is formative: we become different persons through these efforts.

The intriguing question for me at the moment is the issue of rational deliberation: to what extent and through what processes can individuals engage in a rational process in thinking through their decisions and plans at this level? Is it an expectation of rationality that an individual will have composed nested sets of plans and objectives, from the most global to the intermediate to the local?

Or instead, does a person's journey through large events take its shape in a more stochastic way: opportunities, short term decisions, chance involvements, and some ongoing efforts to make sense of it all in the form of a developing narrative? Here we might say that life is not planned, but rather built like Neurath's raft with materials at hand; and that rationality and deliberation come in only at a more local scale.

Here is a simple way of characterizing purposive action over a long and complex period. The actor has certain guiding goals he or she is trying to advance. It is possible to reflect upon these goals in depth and to consider their compatibility with other important considerations. This might be called "goal deliberation". These goals and values serve as the guiding landmarks for the journey -- "keep moving towards the tallest mountain on the horizon". The actor surveys the medium-term environment for actions that are available to him or her, and the changes in the environment that may be looming in that period. And he or she composes a plan for these circumstances-- "attempt to keep moderate Southern leaders from supporting cecession". This is the stage of formulation of mid-range strategies and tactics, designed to move the overall purposes forward. Finally, like Odysseus, the actor seizes unforeseen opportunities of the moment in ways that appear to advance the cause even lacking a blueprint for how to proceed.

We might describe this process as one that involves local action-rationality guided by medium term strategies and oriented towards long term objectives. Rationality comes into the story at several points: assessing cause and effect, weighing the importance of various long term goals, deliberating across conflicting goals and values, working out the consequences of one scenario or another, etc.

As biologists from Darwin to Dawkins have recognized, the process of species evolution through natural selection is inherently myopic. Long term intelligent action is not so, in that it is possible for intelligent actors to consider distant solutions that are potentially achievable through orchestrated series of actions -- plans and strategies. But in order to achieve the benefits of intelligent longterm action, it is necessary to be intelligent at every stage -- formulate good and appropriate distant goals, carefully assess the terrain of action to determine as well as possible what pathways exist to move toward those goals, and act in the moment in ways that are both intelligent solutions to immediate opportunities and obstacles, and have the discipline to forego short term gain in order to stay on the path to the long term goal. But, paradoxically, it may be possible to be locally rational at every step and yet globally irrational, in the sense that the series of rational choices lead to an outcome widely divergent from the overriding goals one has selected.


I've invoked a number of different ideas here, all contributing to the notion of rational action over an extended time: deliberation, purposiveness, reflection, calculation of consequences, intelligent problem solving, and rational choice among discrete alternatives. What is interesting to me is that each these activities is plainly relevant to the task of "rational action"; and yet none reduces to the other. In particular, rational choice theory cannot be construed as a general and complete answer to the question, "what is involved in acting rationally over the long term?".

Michael Bratman is the philosopher who has thought about these issues the most deeply; Intention, Plans, and Practical Reason. Manuel Vargas and Gideon Yaffe's recent festschrift on Bratman's work, Rational and Social Agency: The Philosophy of Michael Bratman, is also a useful contribution on the subject. Sarah Paul provides a nice review of Rational and Social Agency here.
Posted by Dan Little at 6:55 PM