Von Neumann on the brain

After World War II John von Neumann became interested in the central nervous system as a computing organ. Ironically, more was probably known about neuroanatomy than about advanced digital computing in the 1940s; that situation has reversed, of course. Now we know a great deal about calculating, recognizing, searching, and estimating in silicon; but relatively less about how these kinds of processes work in the setting of the central nervous system. At the time of his final illness von Neumann was preparing a series of Silliman Lectures at Yale University that focused on the parallels that exist between the digital computer and the brain; these were published posthumously as The Computer and the Brain (CB) in 1958. This topic also comes in for substantial discussion in Theory Of Self Reproducing Automata (TSRA) (edited and published posthumously by Arthur Burks in 1966). It is very interesting to see how von Neumann sought to analyze this problem on the basis of the kinds of information available to him in the 1950s.

Much of CB takes the form of a rapid summary of the state of knowledge about digital computing machines that existed in the 1950s, from Turing to ENIAC. Almost all computers today possess the "von Neumann" architecture along these lines. 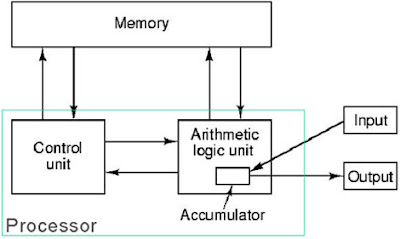 Alan Turing provided some of the mathematical and logical foundations of modern digital computing (link). He hypothesized a very simple computing device that consisted of a tape of indefinite length, a  tape drive mechanism that permitted moving the tape forwards or backwards one space, and a read-write mechanism that could read the mark in a tape location or erase and re-write the mark in that location. Here is a diagram of a Turing machine:

(Fascinatingly, here is a photo of a working model of a Turing machine (link):)

From the time of Frege it has been understood that mathematical operations can be built up as compounds of several primitive operations -- addition, subtraction, etc.; so, for example, multiplication can be defined in terms of a sequence of additions. Programming languages and libraries of subroutines take advantage of this basic logic: new functions are defined as series of more elementary operations embodied in machine states. As von Neumann puts the point in CB:

More specifically: any computing machine that is to solve a complex mathematical problem must be “programmed” for this task. This means that the complex operation of solving that problem must be replaced by a combination of the basic operations of the machine. Frequently it means something even more subtle: approximation of that operation—to any desired (prescribed) degree—by such combinations. (5)

Key questions about the capacities of a computing machine, either electro-mechanical or biological, have to do with estimating its dimensionality: how much space does it occupy, how much energy does it consume, and how much time does it take to complete a given calculation? And this is where von Neumann's analysis took its origin. Von Neumann sought to arrive at realistic estimates of the size and functionality of the components of these two kinds of computation machines. The differences in scale are enormous, whether we consider speed, volume, or energy consumption. Fundamentally, neurons are more numerous by orders of magnitude (10^10 versus 10^4); slower by orders of magnitude (5 msec vs. 10^-3 msec); less energy-intensive by orders of magnitude (10^-3 ergs vs.10^2 ergs); and computationally less precise by orders of magnitude. (Essentially he estimates that a neural circuit, either analog or digital, is capable of precision of only about 1%.) And yet von Neumann concludes that brains accomplish computational problems faster than digital computers because of their massively parallel structure -- in spite of the comparative slowness of the individual elements of computation (neurons). This implies that the brain embodies a structurally different architecture than sequential digital computing embodied in the von Neumann model.

Von Neumann takes the fundamental operator of the brain to be the neuron, and he represents the neuron as a digital device (in spite of its evident analog electrochemical properties). A neuron transmits a pulse. "The nervous pulses can clearly be viewed as (two-valued) markers.... The absence of a pulse then represents one value (say, the binary digit 0), and the presence of one represents the other (say, the binary digit 1)" (42). "The nervous system has a prima facie digital character" (44).

In their introduction to the second edition of CB the Churchlands summarize von Neumann's conclusion somewhat differently by emphasizing the importance of the analog features of the brain: "If the brain is a digital computer with a von Neumann architecture, it is doomed to be a computational tortoise by comparison... [But] the brain is neither a tortoise nor a dunce after all, for it was never a serial, digital machine to begin with: it is a massively parallel analog machine" (kl 397). However, it appears to me that they overstate the importance of analog neural features in von Neumann's account. Certainly vN acknowledges the analog electro-chemical features of neural activity; but I don't find him making a strong statement in this book to the effect that analog features contribute to the better-than-expected computational performance of the brain. This seems to correspond more to a view of the Churchlands than to von Neumann's analysis in the 1950s. Here is their view as expressed in "Could a Machine Think?" in Scientific American in 1990:

First, nervous systems are parallel machines, in the sense that signals are processed in millions of different pathways simultaneously. The retina, for example, presents its complex input to the brain not in chunks of eight, 16 or 32 elements, as in a desktop computer, but rather in the form of almost a million distinct signal elements arriving simultaneously at the target of the optic nerve (the lateral geniculate nucleus), there to be processed collectively, simultaneously and in one fell swoop. Second, the brain’s basic processing unit, the neuron, is comparatively simple. Furthermore, its response to incoming signals is analog, not digital, inasmuch as its output spiking frequency varies continuously with its input signals. Third, in the brain axons projecting from one neuronal population to another are often matched by axons returning from their target population. These descending or recurrent projections allow the brain to modulate the character of its sensory processing. (link, 35)

In considering the brain von Neumann reached several fundamental observations. First, the enormous neural network of the central nervous system is itself a universal computing machine. Von Neumann worked on the assumption that the CNS could be "programmed" to represent the fundamental operations of arithmetic and logic; and therefore it has all the power of a universal computational machine. But second, von Neumann believes his analysis demonstrates that its architecture is fundamentally different from the standard von Neumann architecture. This observation is the more fundamental. It derives from von Neumann's estimates of the base speed rate of calculation available to neurons in comparison to vacuum tubes; a von Neumann machine with components of this time scale would take eons to complete the calculations that the brain performs routinely. And so this underlines the importance of the massively parallel computing that is accomplished by the biological neural network. Ironically, however, it has proven challenging to emulate massively parallel neural nets in digital computing environments; here is an interesting technical report by Paul Fox that identifies communication bandwidth as being the primary limiting factor for such emulations (link).

(Tsutomu Miki explores some of these issues in Brainware : Bio-Inspired Architecture and Its Hardware Implementation.)

The brain is calculation and conditioned response. Von Neuman was a genius and an idiot.
People are predictable, not rational.

Who is this mysterious vB whom you mention twice?

I initially thought that "vB" was a typo for "vN" meaning von Neumann, but you use both "vB" and "von Neumann" throughout the post (if using "vB" twice can be called "throughout"). What does "vB" refer to?

Or you could say that von Neumann and Turing's brains themselves, and indeed the brain of any upper level undergraduate who takes a course in the theory of computation, were examples of universal Turing Machines. But that would be cheating.

That is, strictly speaking, for those brains to be the finite-state control unit of a UTM. It takes an unlimited supply of paper, pencils and erasers to duplicate the function of the tape.