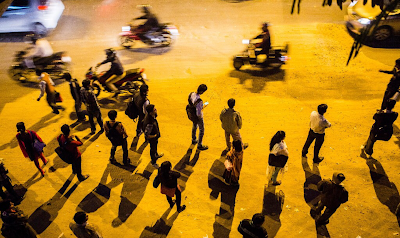 Is every social process generated by facts about individuals? For example, consider a television advertising campaign for a General Motors truck. This is a complicated sequence of events, actions, contracts, relationships, and interactions among organizational units as well as individuals. The campaign itself is constituted by the schedule of television spots on which the adverts are broadcast. The causes of the nuances of the temporally extended production need to be traced to both individual choices and interactions among organizational units. So in this context, let's ask the question: Is this complex social production "generated" by a set of individual-level facts? Not exactly.

Behind the finished campaign lies the organization and entrepreneur who designed the campaign, and the company who paid for it (social facts). Simultaneous with the campaign is the suite of facts about the media and the public in virtue of which it makes sense to purchase the spots and broadcast the adverts (also social facts). And subsequent to the campaign is its reception and the consequences of the campaign (once again, social). This description involves social-level facts. These social facts are embodied through the actions and thoughts of individuals; but the causal action is at the level of the organization, not the individuals. It is hard to see the logic in saying that, given the antecedent state of the individuals in their situations ahead of time, the campaign was generated. Rather, the campaign was generated by the quasi-intentional activities of several interlocking and interacting organizations, as well as the known social properties of the public and the media.

How does this example fit into the scheme of generativeness and emergence? There is nothing mysterious about this scenario; each of the social units mentioned here has microfoundations at the level of the individuals whose actions and thoughts contribute to its operations. The public is constituted by the part of the population who view the media. Clearly the public's properties supervene on the attitudes and states of mind and action of the individuals. General Motors is a giant corporation, a business organization consisting of many semi-autonomous divisions, and located within a market and a regulatory environment. The marketing division is one of those semi-autonomous divisions. It is broadly commissioned to help position the company in the public awareness and to promote sales of the vehicles. The Marketing division may be regarded as an agent with a performance space both within and outside the corporation. If Marketing performs badly -- develops bad content, places ads in front of the wrong demographic, fails to produce the surge of new sales -- the manager is likely to lose his/her job.The sales department of the media organization is similar, with an imperative to sell advertising time slots.

It seems inapt to say that this scenario is generated by antecedent states of individuals. Rather, it is part of the play of the agents and institutions within this kind of social environment, with actors at various levels doing things and being influenced by the play of events and doings, both individual and collective. It is certainly not explanatorily interesting that GM, Marketing, WXYZ, WXYZ Sales, and the public are all composed of individual actors. Instead, we want to know what it is about the circumstances facing these various social actors (the corporation, its divisions, the PR firm, ...) in virtue of which they do the things they do: design the graphics, purchase specific packages of time, demand a given price for the time, and reacts with a new desire to buy a Chevy truck. In other words, we need a social, semiotic, economic, competitive, and organizational account of the activities that transpire here to bring about the advertising campaign.

The logic of this scenario seems quite different from that of Schelling's residential segregation model, where the patterns of segregation are in fact generated by the preferences and decision rules of the participants. In this case the outcome is fundamentally structured at the social level; the individuals merely play their roles within the corporation, the marketing department, the PR firm, etc. It is certainly hard to see how an ABM model might help to reproduce the sequence of social activities identified here.

Further, it is evident that there is downward causation in this story. The whole point of the marketing campaign is to change the attitudes of the public through the instrumentality of the media. But likewise, the actors within the various organizations are affected by their roles. They act and choose differently because of their location and history in the corporation. At a higher level the structure of WXYZ as a corporation is affected by something higher -- the market relations in which it exists and the government regulatory environment which governs it.

So this complicated example of a fairly routine social process seems to be one that throws attention on the causal and intentional properties of the meso-level social structures rather than on the states of agency of the individuals who constitute those structures. And this in turn suggests that it is not the case that all social events are "generated" by the states of mind and action of the individuals who constitute them, even though each of the subordinate events in the sequences possesses microfoundations at the level of the individual actors.
Posted by Dan Little at 8:41 PM