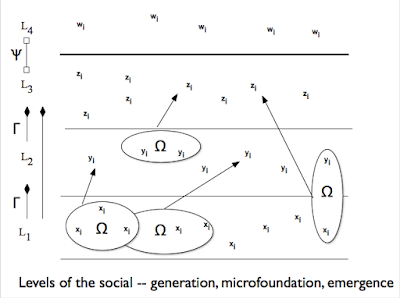 I want to discuss these relations here, but it's worth recalling the other important relations across levels that are sometimes invoked.

So let's focus here on reduction and generation. These are sometimes thought to be equivalent notions; but they are not. Let's grant that the facts about B jointly serve to generate the facts about A. Then A supervenes upon B, by definition. Do these facts imply that A is reducible to B, or that facts of A can be or should be reduced to B? Emphatically not. Reducibility is a feature of the relationship between bodies of knowledge or theories -- our knowledge of A and our knowledge of B. To reduce A to B means deriving what we know about B from what we know about A. For example, the laws of planetary motion are derivable from the law of universal gravitation: by working through the mathematics of gravity it is possible to derive the orbits of the planets around the sun. So the laws of planetary motion are reducible to the law of universal gravitation.

Generativity is not a feature of theories; instead, it is an ontological feature of the world. Physicalism is such a conception. Physicalism maintains that facts about the physical body, including the nervous system, jointly generate all mental phenomena. Generativity involves the idea that, taking the full reality of the properties and powers of B, the properties of A result. The properties of the entities at level B suffice to generate all the properties of the entities at level A. But there is no assurance that our current knowledge about B permits a mathematical derivation of A. Further, there is no assurance that a "full and complete theory" of B would permit such a derivation -- because there is no assurance that such a theory exists at all. And then there is the issue of computability: it may be radically in feasible to perform the calculations necessary to derive A from B.

And so it is clear that reducibility does not follow from generativeness.

There is a second level argument separating generativeness from reducibility as well. This is the fact that there are numerous scientific purposes for which reduction is unnecessary even if it were feasible. It might be possible to derive the motion of a cannonball from a calculation of the motions of the component molecules. But this would be silly. We have no scientific interest or need in doing so.

So it is fully consistent for us to take the position of generativeness and anti-reductionism. And this position makes very good sense in the case of macro and micro social facts. We can take the view that all social entities are embodied in facts about various individuals, their social interactions, and their states of mind. This implies that social facts are generated by facts at the actor level, or that the facts of A supervene upon the facts of B. And yet we can also be emphatic in affirming that there is not need or general possibility for reduction from the one level to the other.

Or in other words, the generativeness of the situation is wholly uninformative.
Posted by Dan Little at 7:31 AM