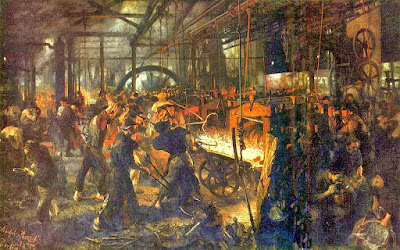 The relationship between feudalism and the origins of capitalism was of great interest to Marx. Here is one way that Marx puts the idea in The Poverty of Philosophy:


M. Proudhon the economist understands very well that men make cloth, linen, or silk materials in definite relations of production. But what he has not understood is that these definite social relations are just as much produced by men as linen, flax, etc. Social relations are closely bound up with productive forces. In acquiring new productive forces men change their mode of production; and in changing their mode of production, in changing the way of earning their living, they change all their social relations. The hand-mill gives you society with the feudal lord; the steam-mill society with the industrial capitalist. (chapter 2)

The question of the transition from feudalism to capitalism remained central for subsequent Marxist thinkers. Consider the view offered by Maurice Dobb in 1946 in Studies In The Development Of Capitalism. Dobb offers an account that corresponds closely to the classical Marxian interpretation offered in Capital: the emergence of the great classes (bourgeoisie and proletariat), primitive accumulation, the dynamics of industrial revolution in England, and the inexorable logic of capital accumulation. Dobb offers a very classical definition of capitalism:


Thus Capitalism was not simply a system of production for the market -- a system of commodity-production as Marx termed it -- but a system under which labour-power had "itself become a commodity" and was bought and sold on the market like any other object of exchange. Its historical prerequisite was the concentration of ownership of the means of production in the hands of a class, consisting of only a minor sector of society, and the consequential emergence of a propertyless class for whom the sale of their labour-power was their only source of livelihood. (7)

Dobb doesn't much care for the notion that there are "many capitalisms" -- many pathways and many institutional variants of market, profit-based economies:


In the case of historians who adopt this nihilistic standpoint, their attitude seems to spring from an emphasis upon the variety and complexity of historical events, so great as to reject any of those general categories which form the texture of most theories of historical interpretation and to deny any validity to frontier-lines between historical epochs. (1)

More recent views of the origins of capitalism have merged Marxism and some of the key ideas of post-colonialism. An interesting current example is Alexander Anievas and Kerem Nişancıoğlu's How the West Came to Rule: The Geopolitical Origins of Capitalism, a 2015 book from Pluto Press.

Anievas and Nişancıoğlu offer an account of the transition to capitalism that emphasizes the international character of the transition from the start. Their story differs in some important ways from the classic Marxian account, according to which European feudalism possessed its own dynamic of conflict between forces and relations of production, eventuating in the emergence of a new social order, capitalism. Anievas and Nişancıoğlu reject a "Eurocentric" approach to the emergence of capitalism and industrial revolution; rather, international trade, war, and colonialism were essential components of the emergence of the capitalist mode of production. Here is their description of Eurocentrism:

So what exactly is Eurocentrism? At its core, it represents a distinctive mode of inquiry constituted by three interrelated assumptions about the form and nature of modern development. First, it conceives of the origins and sources of capitalist modernity as a product of developments primarily internal to Europe. Based on the assumption that any given trajectory of development is the product of a society’s own immanent dynamics, Eurocentrism locates the emergence of modernity exclusively within the hermetically sealed and socioculturally coherent geographical confines of Europe. Thus we find in cultural history that the flowering of the Renaissance was a solely intra-European phenomenon. Analyses of absolutism and the origins of the modern state form are similarly conducted entirely on the terrain of Europe, with non-European cases appearing (if at all) comparatively. Dominant accounts of the rise of capitalism as either an economic form or a social system similarly place its origins squarely in Western Europe, while non-Europe is relegated to an exploited and passive periphery. (4)

The second feature they identify as crucial to Eurocentrism is the idea that "Europe is conceived as the permanent 'core' and 'prime mover' of history" (5), and the third is the idea that "the European experience of modernity is a universal stage of development through which all societies must pass" (5).

Their globalism and internationalism derives from their rejection of each of these premises. The development of capitalism is not "internal" to Europe, but instead was influenced by forces and influences from many parts of the world. The "core" of capitalist development is not Britain or Europe. And there is nothing universal about the sequence of developments that led from "feudalism" to "capitalism" (a point Marx himself insisted upon in his correspondence with Vera Zasulich (link)).

How the West Came to Rule challenges these assumptions by examining the ‘extra-European’ geopolitical conditions and forms of agency conducive to capitalism’s emergence as a distinctive mode of production over the longue durée. (5)

They are open to the idea that there are multiple "capitalisms" rather than a single essence (8); but they argue that there is nonetheless such a thing as capitalism:


We argue that there is a certain unity to its functioning that renders necessary the study of the capitalist mode of production as an intelligible (albeit contradictory) object of analysis. (8)

The core they identify has to do with the "ways in which multiple relations of domination, subordination and exploitation intersect with and reproduce each other".


From this perspective we argue that capitalism is best understood as a set of configurations, assemblages, or bundles of social relations and processes oriented around the systematic reproduction of the capital relation. (8-9)

Anievas and Nişancıoğlu describe their book as historical sociology; they are interested in the domestic and international factors that led to the emergence of global capitalism.  Their book is really about the transition from feudalism to capitalism rather than an account of the core features of the medieval social economy itself. They look at feudalism through the lens of its role in the formation of capitalism -- perhaps not the best way of positioning oneself to recognize the distinctive and historically particular characteristics of the medieval social and economic order.

Robert Brenner's treatment of the emergence of English capitalism is particularly instructive (link). (Anievas and Nişancıoğlu offer considerable criticism of Brenner's approach.) In two important articles in the 1970s and 1980s Brenner casts doubt on the classic Marxian derivation of capitalism from feudalism; he argued that it was precisely differences in feudal regimes that accounted for the different trajectories taken by English and French capitalism. Ironically, the social power held by French peasants impeded the emergence of managerial farming, which was itself an important step on the way to industrial revolution. As a consequence the proletarianization of English peasants proceeded much more rapidly than French society.

There is an important historiographical issue here that is illustrated in these works by Dobb, Anievas and Nişancıoğlu, and Brenner: to what extent is it feasible to look for large macro-processes and transitions in history? Should we expect large social and economic factors writing out social change? Or is history more contingent and more multi-pathed than that? My own view is that the latter approach is correct (link). Neither technology (link) nor population (link) nor class conflict (link) suffices to explain large historical change. Rather, large structures and small innovations add up to contingent and variable pathways of historical development. We've gotten past the "agent-structure" debate; but perhaps we still have the "large factor, small factor" debate standing in front of us (link). And the solution may be the same: both large structures and contingent local arrangements are involved in the development of new social systems.

Fascinating stuff. Maybe our focus is wrong altogether, and the pride of place given to capitalism is the very problem. We are a long way, in the text above, from La Longue Durée, but maybe capitalism is a secondary trait, a syndrone, if you like, which can display different symptoms in different cases, but is internally consistent in its overall "attack". As long as one is examining what is going on within the syndrone, one can never find the answer, because the syndrome itself is a byproduct of a more fundamental cause. Maybe it is the land, pace Braudel, or, perhaps, tracking without actully following Weber or Tawney, it is the Black Plague and its mutation into a kind of viral individualism.