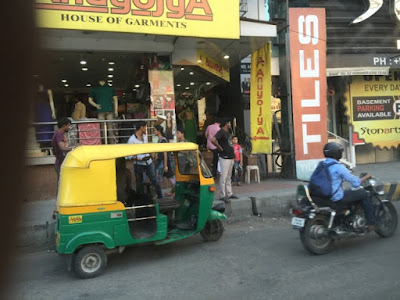 A few days in Bangalore, Kerala, and Mumbai have been very interesting, from a social-change point of view. There is an election cycle underway, with prospects for a strong showing for the secular Left in several states. There is a resurgence of bigotry of various forms, including both anti-Muslim activism and violence against student activists, cattle herders, and Dalit teenagers. There is the deplorable fact that BJP leadership and Prime Minister Modi are not owning up to their own role in encouraging these forms of inter-group hatred, and certainly are not taking the leadership role that is the responsibility of a governing party to denounce hatred and violence. And there are mounting problems of vehicular traffic, road accidents, drought remediation, garbage removal, and sanitation that absolutely must be solved if ordinary Indians are to have reasonable levels of health, safety, and comfort. It is very interesting to me that the leading appeals coming from Left politicians and candidates in Kerala are for rejecting bigotry and encouraging scientific composting of household trash. These may seem to lie at opposite ends of the spectrum, but they reflect some of India's most pressing challenges today.

At the same time there are encouraging signs of progress on almost all these issues. For example, the Center for Inclusion and Inclusive Policy at the National Law School University of India in Bangalore brings together a strong cadre of activist scholars committed to ending the persistent low status and opportunity of Dalits. One project in particular is impactful -- bringing the writings of BR Ambedkar, author of Annihilation of Caste, to pre-university students through mobile classes for high school students. More than 50,000 students have been exposed to this course already in Karnataka. Another scholar at the law school has spent his career addressing the continuing problem of bonded labor in India. It is not a problem of the past. He spoke powerfully of the difficulty of suppressing this practice through legislation, given the social power of the landlords and business owners who circumvent these laws. The Center has been at work for about 13 years and provides focus nationally for these important social issues.

The Center for Agrarian Research at the Indian Statistical Institute in Bangalore is another good example of an intellectual force for positive change in rural India (link). Under the leadership of VK Ramachandran and Madhura Swaminathan, the Center organizes a group of young researchers to conduct village-level studies in various parts of India. The scientific directors of the Center work closely with grassroots rural organizations (for example, the All India Agricultural Workers Union and the All India Women's Democratic Organization), to ensure that the focus of the research aligns as well as possible with the knowledge needs of rural people in their struggles for social progress. The journal, Review of Agrarian Studies, is now open-access online, and it is worthwhile for readers of Understanding Society to become frequent visitors. The Center has also published a toolbox presenting the methods of survey and analysis that guides their work, and it has published a valuable series of books and monographs as well. This work serves to highlight features of local village life that are overlooked in national surveys. One important point their work documents is the importance of measuring income directly rather than estimating income through consumption. The range of inequalities in rural society turns out to be much higher than national and international estimates would indicate when this measure is evaluated with precision.

India is hungry for change. And there is an appetite for large theoretical frameworks that can be used to guide that change. For the right and much of the business leadership of the country the preferred theory is a form of neo-liberalism -- a preference for low state regulation, laissez-faire markets, and unbounded entrepreneurship. The BJP embraces this ideology and adds in a virulent form of Hindu nationalism into the mix. For the left, classical Marxism and an admiration of the progress of China since its revolution are dominant ideas. Many conversations come back to the question of social ownership of the means of production. But perhaps India needs a program for change which is less polarized and less ideological. The political economy of social democracy seems to fit the bill better than either Smith or Marx, USA or China.

Three points seem apparent. First, social progress in India simply mandates overturning the many forms of inequality and deprivation that exist for many groups in India -- Dalits and the rural poor in particular, but also the tens of millions of migrants who barely survive in India's largest cities. And there are structures of power and privilege that support the current status quo. So a powerful political movement will be required that expresses a strong and realistic program of change when it comes to poverty and systemic discrimination. The Dalit problem is crucial.


Second, India needs strong institutions at every level of government, from the municipality to state to the national government. Laissez-faire theories of the self-regulating virtues of the market and private activity will simply not solve the problems that exist, from persistent discrimination and violence to environmental pollution to unlicensed development to garbage disposal to traffic safety. Strong and effective regulation of private activity by persons and corporations will be needed or India will be overwhelmed by exploitation, pollution, and inequality.

Third, these processes of change must move forward through democratic practice. The progressive left must find ways to make its program appealing to the masses of Indian citizens who currently support more conservative approaches to government and greater quiescence about India's underlying structures of oppression. Markets and private ownership of land are not inherently inimical to progress. But they require regulation, and the fruits of economic success need to be shared in an equitable way. Redistributive taxation is morally and socially mandatory -- exactly as it is, in varying degrees, in every democracy in Europe and North America. This means a substantial use of the power of taxation to provide for crucial social services -- health, education, nutrition, housing -- at levels that permit all Indians, rich and poor, to have reasonable chances of success in the resulting economy. Or in other words, India needs a strong welfare state with effective market regulation and voice for the poor and dispossessed.

Where is Nordic socialism when India most needs it (link)?
Posted by Dan Little at 12:24 AM

I would suggest sending this fine post to Vijay Prashad at Trinity University.

" MORE REGULATION " - have you forgotten the time upto 80's?
We have been through that path already with the result of "Hindu Rate of Growth"!

" Left Resurgence " - what are you smokin?
Since Independence, Lefts relevance are limited to 3 states among 30+ Indian states! It has not changed a bit! Only that, there is a chance that their election rout since 2009 (even on these states)might get arrested in the coming state level election!

Your piece sounds more political/ideological in nature to me!