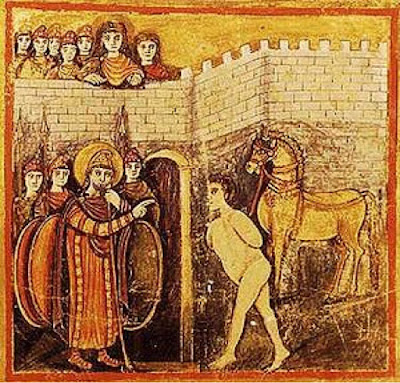 An anonymous reader responds to my short discussion of Patrick Geary's treatment of the late Roman Empire to recommend Samuel Dill's treatment of this process 100 years ago in Roman Society in the Last Century of the Western Empire and Roman Society in Gaul in the Merovingian Age, books written in 1898 and 1926 respectively. In the anonymous reader's opinion, many of Geary's insights are already there in Dill's books.

Surprisingly enough, Roman Society in the Last Century of the Western Empire is available in digital editions; so it is easy enough to consult it. (I can't locate a digital copy of the Merovingian Age book.) How sophisticated was the understanding of the late Roman Empire at the beginning of the twentieth century? Does a book of history written over a century ago have the potential for giving us new insights into its subject matter? Or are we always better off turning to the most recent scholarship when it comes to history and historical social science?

The thrust of Dill's Last Century is quite different from Geary's approach one hundred years later (not surprisingly). Dill's approach is more categorical about the abruptness and distinctness of the changes that took place during the century under treatment. His evidence is drawn largely from classical historians, whereas Geary's approach takes advantage of the most recent archaeological evidence. Much of this method and style is expressed in the preface to the first edition:


The limits of the period covered by this study of Roman society have not been arbitrarily chosen. The last hundred years of the Western Empire seem marked off both by momentous events, and, for the student of society, by the authorities at his command. The commencement of the period coincides roughly with the passage of the Gothic hordes across the Danube, the accession of Gratian and Theodosius, the termination of the long truce between paganism and the Christian Empire, and the reopening of the conflict which, within twenty years, ended in the final prohibition of heathen rites. It closes not only with the deposition of the last shadowy Emperor of the West, but with the practical extinction of Roman power in the great prefecture of the Gauls. Perhaps even more obvious are the lines drawn by the fullest authorities for our subject. The earliest extant letters of Symmachus, which describe the relations of the last generation of great pagan nobles, belong to the years 376-390. The literary and political activity of Ausonius coincides with the same years, and from his poems we derive an invaluable picture of a provincial society in the reigns of Gratian and Theodosius. A searching light is thrown on the same generation by some of St. Jerome's letters, by the Saturnalia of Macrobius, and by many Inscriptions. At the other end of our period we are almost equally fortunate in our information. The works of Apollinaris Sidonius of Auvergne are a priceless revelation of the state of society, both in Rome and in Gaul, from the accession of Avitus till the final triumph of the Visigothic power.

As historiography, in other words, Dill's scholarship suffers from the "great men, great dates" problem of nineteenth century historians more generally. His book is very much about the individuals who made this history -- at the top -- and the chronology of their actions and effects. This impression is born out by the extensive table of emperors, kings, and dates that Dill includes in the opening matter of the book: 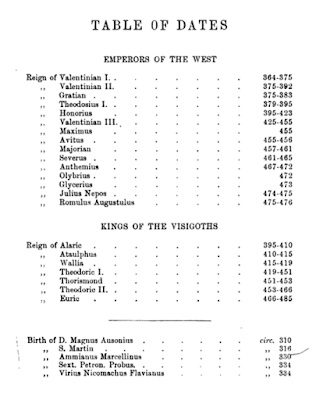 A related observation is the cultural and normative commitments that are exposed by the narrative. The work is deeply etched by its normative attitude towards Christianity:


In spite of the moral force which ensured the future to the Christian faith, its final triumph was long delayed. Religious conservatism is, of all forms of attachment to the past, probably the most difficult to overcome. It has its seat in the deepest and most powerful instincts of human nature, which, when they have once twined themselves around a sacred symbol of devotion, are only torn away after a long struggle. (3)

This passage illustrates the moral entwinement of Christianity into the historian's apperception of the period; it also reveals a kind of teleological thinking about history that would no longer find support among academic historians. Dill denounces "heathenism" and paganism repeatedly.


In the final stand which paganism made against imperial edicts and the polemic of the Church, many different forces were arrayed. Sensuality and gross superstition in the degraded masses clung to the rites of magic and divination, to the excitement of the circus, and the obscenities of the theatre. (70)

Few inquiries should be more interesting than the attempt to form a conception of the inner tone and life of society in Western Europe on the eve of its collapse. Was society as corrupt and effete as it has been represented? Were its vices, as Salvianus insisted, the cause of the triumph of the barbarians? (115)

But Dill also finds an underlying current of monotheism pushing its way through the thought of the ancient world: "More than five centuries before Christ, Greek speculation had lifted men's minds to the conception of a mysterious Unity behind the phantasmagoria of sense" (8). This seems to illustrate the teleological bent of Dill's thinking.

Dill is centrally preoccupied with the moral and intellectual character of the period about which he writes. He wants to know about the morals, the spirituality, the religious piety, and the poetry of the prominent people who made up Western Europe during these centuries; and he wants to view these characteristics as having crucial causal force in the direction of change that occurred. Here is how he begins a chapter late in the book ("Relations of Romans with the invaders"):


In the previous chapter an attempt has been made to collect the views and feelings of persons, representing various localities and differences of circumstance and character, about the condition and future of the Empire in the face of its assailants. (347)

And earlier he emphasizes the moral decline of Roman civilization:


A careful study of the Code will correct many a popular and antiquated misconception of that great event. It will reveal the fact that, long before the invasions of the reign of Honorius, the fabric of Roman society and administration was honeycombed by moral and economic vices, which made the belief in the eternity of Rome a vain delusion. The municipal system, once the great glory of Roman organising power, had in the fourth century fallen almost into ruin. The governing class of the municipalities, called curiales, on whom the burdens of the Empire had been accumulated, were diminishing in number, and in the ability to bear an ever -increasing load of obligations. (245)

Further, unlike contemporary approaches to history that emphasize obscure social actors, Dill explicitly excludes the plebeian class from his treatment.


Of the three great classes into which Roman society was divided, the plebeian class, composed of traders, free artisans, etc., who possessed no property in land, may, for our present purpose, be left out of consideration. The other two classes must, from their ownership of the land, and from their relations to one another and to the treasury, engage our sole attention. Of the tone and character of the highest order in the social hierarchy we have attempted to give some account in a previous chapter. They have left us literary materials which enable us to form a tolerably clear idea of their spirit and manner of life; but they seldom speak of their material fortunes or of the classes beneath them, and on these subjects our information must be drawn chiefly from the Code. (248)

So social history, and careful documentation of the role of ordinary people in the events of the time period, plays virtually no role in Dill's approach. By contrast, Geary and other contemporary historians of the ancient world pay substantial attention to the material constitutes of governance, migration, taxation, agriculture, and war -- topics which Dill mostly ignores.

Finally, the evidence that constitutes the foundation of Dill's research is entirely textual and literary. Unlike Geary, who gives substantial weight to archeological evidence, but also unlike Theodor Mommsen, who in mid-nineteenth century made innovative use of inscriptions and steles and won the Nobel Prize in literature in 1902 for his historical writing (The History of Rome Vol. 1-5), Dill's account is almost exclusively literary. Dill tells a story, and it is an interesting story; but it has very little of the efforts towards uncovering underlying social structures and realities that are defining features of much contemporary historiography.

So it is hard to see that reading Dill today would enlighten us much about the causes and dynamics of change in the late Roman Empire. The history is antiquarian and personalist, it proceeds with a background commitment to the moral superiority of Christianity, and it provides no insight into the kinds of material and structural factors that are of primary interest today. Reading Mommsen sounds like a much better investment.

Completely unfair criticism of Dill work. He did give attention to the masses, but certainly they were not the artifex of history in those times. His judgements are accurate and deep no matter how much a christian Dill was. It looks to me that the prejudice about the supposed prejudices of this kind of historian is bigger than Dill prejudices, whatever they were. Dill has been for me, a keeen reader of histuiry, a great discovery. Not only he writes very very well, but his judgements rarely are out of the mark.