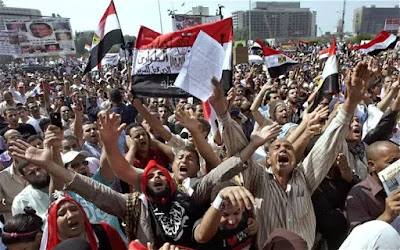 Recent posts have grappled with the interesting topic of phase transitions in physics (link, link, link). One reason for being interested in this topic is its possible relevance to the social world, where abrupt changes of state in the social plenum are rare but known occurrences. The eruption of protest in numerous countries across the Middle East and North Africa during the Arab Spring is one example. Essentially we can describe these incidents as moments when ordinary citizens are transformed from quiescent members of civil society, pursuing their private lives as best they can, to engaged activists assembling at great risk in large demonstrations. Is this an example of a phase transition? And are there observable indicators that might allow researchers to explain and sometimes anticipate such critical points?

There is a great deal of interesting research underway on these topics in the field of complex systems and communications theory. The processes and phenomena that researchers are identifying appear to have a great deal of importance both for understanding current social dynamics and potentially for changing undesirable outcomes.

Researchers on the dynamics of mass social media have addressed the question of critical transitions. Kuehn, Martens, and Romero (2014) provide an interesting approach in their article, "Critical transitions in social network activity" (link). Also of interest is Daniel Romero's "An epidemiological approach to the spread of political third parties", co-authored with Christopher Kribs-Zaleta, Anuj Mubayi, and Clara Orbe (link).

Here is the abstract for "Critical transitions":


A large variety of complex systems in ecology, climate science, biomedicine and engineering have been observed to exhibit tipping points, where the dynamical state of the system abruptly changes. For exam- ple, such critical transitions may result in the sudden change of ecological environments and climate conditions. Data and models suggest that detectable warning signs may precede some of these drastic events. This view is also corroborated by abstract mathematical theory for generic bifurcations in stochastic multi-scale systems. Whether such stochastic scaling laws used as warning signs for a priori unknown events in society are present in social networks is an exciting open problem, to which at present only highly speculative answers can be given. Here, we instead provide a first step towards tackling a simpler question by focusing on a priori known events and analyse a social media data set with a focus on classical variance and autocorrelation warning signs. Our results thus pertain to one absolutely fundamental question: Can the stochastic warning signs known from other areas also be detected in large-scale social media data? We answer this question affirmatively as we find that several a priori known events are preceded by variance and autocorrelation growth. Our findings thus clearly establish the necessary starting point to further investigate the relationship between abstract mathematical theory and various classes of critical transitions in social networks.

They use the idea of a tipping point rather than a phase transition, but there seems to be an important parallel between the two ideas. (Here are a few prior posts on continuity and tipping points; link, link.) Here is they define the idea of a critical transition: "A critical transition may informally be defined as a rapid and drastic change of a time-dependent dynamical system" (2). The warning signs they consider are formal and statistical rather than substantive: increasing variance and rising auto-correlation:


Two of the most classical warning signs are rising variance and rising auto-correlation before a critical transition [10,28]. The theory behind these warning signs is described in more detail in Appendix A. The basic idea is that if a drastic change is induced by a critical (bifurcation) point, then the underlying deterministic dynamics becomes less stable. Hence, the noisy fluctuations become more dominant as the decay rate decreases close to the critical transition. As a result, (a) the variance in the signal increases, due to the stronger fluctuations and (b) the system’s state memory (i.e., auto-correlation) increases, due to smaller deterministic contraction onto a single state [10,11]. It can be shown that both warning signs are related via a suitable fluctuation–dissipation relation [29]. (2) 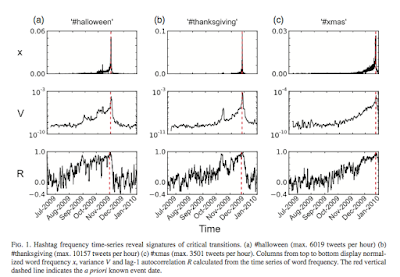 It is plain from the graphs of these variables that the frequency, variance, and autocorrelation statistics for the relevant hashtags demonstrate a rising trend as they approach the event and fall off steeply following the event; so these statistics post-dict the event effectively. But of course there is no value in predicting the occurrence of Halloween based on the frequency of #halloween earlier in October; we know that October 31 will soon occur. The difficult research question posed here is whether it is possible to identify warning signs for unknown impending events. The authors do not yet have an answer to this question, but they offer a provocative hypothesis: "These time series illustrate that there is a variety of potentially novel dynamical behaviors in large-scale social networks near large spikes that deserve to be investigated in their own right." (4). This suggests several questions for future investigation:

Also of interest for issues raised previously in Understanding Society is Romero, Kribs-Zaleta, Mubayi, and Orbe's "An epidemiological approach to the spread of political third parties" (link). This paper is relevant to the topic of the role of organizations in the spread of social unrest considered earlier (link, link). Their paper uses the example of Green Party activism as an empirical case. Here is their abstract:

Abstract. Third political parties are influential in shaping American politics. In this work we study the spread of a third party ideology in a voting population where we assume that party members/activists are more influential in recruiting new third party voters than non-member third party voters. The study uses an epidemiological metaphor to develop a theoretical model with nonlinear ordinary differential equations as applied to a case study, the Green Party. Considering long-term behavior, we identify three threshold parameters in our model that describe the different possible scenarios for the political party and its spread. We also apply the model to the study of the Green Party’s growth using voting and registration data in six states and the District of Columbia to identify and explain trends over the past decade. Our system produces a backward bifurcation that helps identify conditions under which a sufficiently dedicated activist core can enable a third party to thrive, under conditions which would not normally allow it to arise. Our results explain the critical role activists play in sustaining grassroots movements under adverse conditions.

And here is the basic intuition underlying the analysis of this paper:


We use an epidemiological paradigm to translate third party emergence from a political phenomenon to a mathematical one where we assume that third parties grow in a similar manner as epidemics in a population. We take this approach following in the steps of previous theoretical studies that model social issues via such methods. The epidemiological metaphor is suggested by the assumption that individuals’ decisions are influenced by the collective peer pressure generated by others’ behavior; the “contacts” between these two groups’ ideas are analogous to the contact processes that drive the spread of infectious diseases. (2)

Their approach makes use of a system of differential equations to describe the behavior of the population as a whole based on specific assumptions. It would seem that the problem could be approached using an agent-based model as well. This paper is relevant to the general topic of critical points in social behavior as well, since it attempts to discover the conditions under which a social movement like third-party mobilization will accelerate rather than decay.

Also of interest to the topic of large dynamic social processes and social media is R. Kelly Garrett and Paul Resnick, "Resisting political fragmentation on the Internet" (link). Here is their abstract:


Abstract: Must the Internet promote political fragmentation? Although this is a possible outcome of personalized online news, we argue that other futures are possible and that thoughtful design could promote more socially desirable behavior. Research has shown that individuals crave opinion reinforcement more than they avoid exposure to diverse viewpoints and that, in many situations, hearing the other side is desirable. We suggest that, equipped with this knowledge, software designers ought to create tools that encourage and facilitate consumption of diverse news streams, making users, and society, better off. We propose several techniques to help achieve this goal. One approach focuses on making useful or intriguing opinion-challenges more accessible. The other centers on nudging people toward diversity by creating environments that accentuate its benefits. Advancing research in this area is critical in the face of increasingly partisan news media, and we believe these strategies can help.

This research too is highly relevant to the dynamic social processes through which largescale social changes occur, and particularly so in the current climate of fake news and deliberate political polarization.

(It is interesting that social media and the Internet come into this story in several different ways. Google employee and Egyptian activist Wael Ghonim played a central role in the early stages of activation of the uprisings in Cairo in 2011. His book, Revolution 2.0: The Power of the People Is Greater Than the People in Power: A Memoir, is a fascinating exposure to some of the details of these events, and the short book Wael Ghonim... Facebook and The Uprising in Egypt by Dhananjay Bijale specifically addresses the role that Ghonim and FaceBook played in the mobilization of ordinary young Egyptians.)
Posted by Dan Little at 8:53 AM