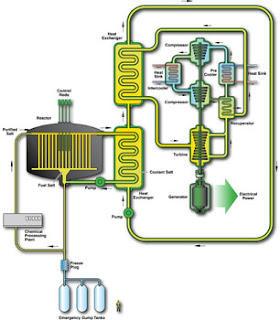 Organizational and regulatory features are sometimes part of the causal background of important technology failures. This is particularly true in the history of nuclear power generation. The promise of peaceful uses of atomic energy was enormously attractive at the end of World War II. In abstract terms the possibility of generating useable power from atomic reactions was quite simple. What was needed was a controllable fission reaction in which the heat produced by fission could be captured to run a steam-powered electrical generator.

The technical challenges presented by harnessing nuclear fission in a power plant were large. Fissionable material needed to be produced as useable fuel sources. A control system needed to be designed to maintain the level of fission at a desired level. And, most critically, a system for removing heat from the fissioning fuel needed to be designed so that the reactor core would not overheat and melt down, releasing energy and radioactive materials into the environment.

Early reactor designs took different approaches to the heat-removal problem. Liquid metal reactors used a metal like sodium as the fluid that would run through the core removing heat to a heat sink for dispersal; and water reactors used pressurized water to serve that function. The sodium breeder reactor design appeared to be a viable approach, but incidents like the Fermi 1 disaster near Detroit cast doubt on the wisdom of using this approach. The reactor design that emerged as the dominant choice in civilian power production was the light water reactor. But light water reactors presented their own technological challenges, including most especially the risk of a massive steam explosion in the event of a power interruption to the cooling plant. In order to obviate this risk reactor designs involved multiple levels of redundancy to ensure that no such power interruption would occur. And much of the cost of construction of a modern light water power plant is dedicated to these systems -- containment vessels, redundant power supplies, etc. In spite of these design efforts, however, light water reactors at Three Mile Island and Fukushima did in fact melt down under unusual circumstances -- with particularly devastating results in Fukushima. The nuclear power industry in the United States essentially died as a result of public fears of the possibility of meltdown of nuclear reactors near populated areas -- fears that were validated by several large nuclear disasters.

What is interesting about this story is that there was an alternative reactor design that was developed by US nuclear scientists and engineers in the 1950s that involved a significantly different solution to the problem of harnessing the heat of a nuclear reaction and that posed a dramatically lower level of risk of meltdown and radioactive release. This is the molten salt reactor, first developed at the Oak Ridge National Laboratory facility in the 1950s. This was developed as part of the loopy idea of creating an atomic-powered aircraft that could remain aloft for months. This reactor design operates at atmospheric pressure, and the technological challenges of maintaining a molten salt cooling system are readily solved. The fact that there is no water involved in the cooling system means that the greatest danger in a nuclear power plant, a violent steam explosion, is eliminated entirely. Molten salt will not turn to steam, and the risk of a steam-based explosion is removed completely. Chinese nuclear energy researchers are currently developing a next generation of molten salt reactors, and there is a likelihood that they will be successful in designing a reactor system that is both more efficient in terms of cost and dramatically safer in terms of low-probability, high-cost accidents (link). This technology also has the advantage of making much more efficient use of the nuclear fuel, leaving a dramatically smaller amount of radioactive waste to dispose of.

So why did the US nuclear industry abandon the molten-salt reactor design? This seems to be a situation of lock-in by an industry and a regulatory system. Once the industry settled on the light water reactor design, it was implemented by the Nuclear Regulatory Commission in terms of the regulations and licensing requirements for new nuclear reactors. It was subsequently extremely difficult for a utility company or a private energy corporation to invest in the research and development and construction costs that would be associated with a radical change of design. There is currently an effort by an American company to develop a new-generation molten salt reactor, and the process is inhibited by the knowledge that it will take a minimum of ten years to gain certification and licensing for a possible commercial plant to be based on the new design (link).

This story illustrates the possibility that a process of technology development may get locked into a particular approach that embodies substantial public risk, and it may be all but impossible to subsequently adopt a different approach. In another context Thomas Hughes refers to this as technological momentum, and it is clear that there are commercial, institutional, and regulatory reasons for this "stickiness" of a major technology once it is designed and adopted. In the case of nuclear power the inertia associated with light water reactors is particularly unfortunate, given that it blocked other solutions that were both safer and more economical.

(Here is a valuable review of safety issues in the nuclear power industry; link. Also relevant is Robin Cowan, "Nuclear Power Reactors: A Study in Technological Lock-in"; link -- thanks, Özgür, for the reference.)
Posted by Dan Little at 10:56 AM

I used to work in the nuclear industry, and to put it bluntly you're massively understating the difficulty of getting a molten salt reactor design running. Older reactors had issues with leaks (molten salt is not fun stuff!), the highly complex chemistry due to the extremely corrosive nature of the various chemicals, pump failures and all kinds of other things. I think that there were also issues around neutron embrittlement of the reactor vessels due to the specific alloys which had to be used to house the salt in the first place. To say that "the technological challenges of maintaining a molten salt cooling system are readily solved" is, frankly, completely wrong. The stuff is a nightmare to deal with.

It is a common trope all over the internet that MSRs were abandoned for purely regulatory reasons and if it weren't for the industry running off in the direction of water reactors then we'd all be swimming in safe, cheap, salt-driven nuclear power, but this is a gross simplification of the much more complex reality.

Concentrating solar power plants are already using molten salts as coolants. You can know more by searching about "Crescent Dunes" in the internet.

Molten salt reactor were invented for aircraft propulsion for a nuclear powered bomber which can fly months without refueling. The nuclear aircraft project was well funded and the aircraft-nuclear-reactors actually worked.

The Oak Ridge National Laboratory has produced a video about molten salt reactor. It is available on Youtube. https://www.youtube.com/watch?v=tyDbq5HRs0o

Aluminum refining needs molten salts, especially the fluoride salts that are very similar to the ones used in a Molten salt reactor.

The Molten-Salt Reactor Experiment achieved more than 11,000 critical hours completing all the objectives of the experiment. https://www.youtube.com/watch?v=tyDbq5HRs0o

Jet engines operate at higher temperatures and higher corrosion environments. We have such alloys which can withstand high temperatures and corrosion. If US government or US military is interested in Molten Salt Reactor technology, it has capability to develop a commercial molten salt reactor within months.

"But there is little doubt that a competing gas-graphite system was safer because it offered greater protection against catastrophic loss of coolant."

Robin Cowan's study of "Nuclear Power Reactors: A Study in Technological Lock-in" * greatly summarizes all the story behind the lock-in to light water technologies in nuclear energy. As you mentioned, "Light water advanced rapidly along its learning curve, and by the time other technologies tried to compete, it was too late." Three factors, according to the paper I could say, prepared the light water's victory:
- The choice by the US Navy in the late 1940s of light water for its propulsion program and its subsequent research on that technology,
- The desire, following the Soviet atomic bomb (1949), for quick construction of a nuclear generating station and
- The subsidies given by the U.S. government in an attempt to have light water pre-empt other technologies domestically and in Europe.