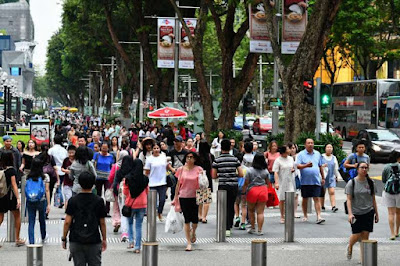 Understanding Society has now reached its twelfth anniversary of continuous publication. This represents 1,271 posts, and over 1.3 million words. According to Google Blogspot statistics, the blog has gained over 11 million pageviews since 2010. Just over half of visitors came from the United States, Great Britain, and Canada, with the remainder spread out over the rest of the world. The most popular posts are "Lukes on power" (134K) and "What is a social structure?" (124K).

I've continued to find writing the blog to be a great way of keeping several different lines of thought and research going. My current interest in "organizational causes of technology failures" has had a large presence in the blog in the past year, with just under half of the posts in 2019 on this topic. Likewise, a lot of the thinking I've done on the topic of "a new ontology of government" has unfolded in the blog. Other topic areas include the philosophy of social science, philosophy of technology, and theories of social ontology. A theme that was prominent in 2018 that is not represented in the current year is "Democracy and the politics of hate", but I'm sure I'll return to this topic in the coming months because I'll be teaching a course on this subject in the spring.

I continue to look at academic blogging as a powerful medium for academic communication, creativity, and testing out new ideas. I began in 2007 by describing the blog as "open-source philosophy", and it still has that character for me. And I continue to believe that my best thinking finds expression in Understanding Society. Every post that I begin starts with an idea or a question that is of interest to me on that particular day, and it almost always leads me to learning something new along the way.

I've also looked at the blog as a kind of experiment in exploration of social media for serious academic purposes. Can blogging platforms and social media platforms like Twitter or Facebook contribute to academic progress? So it is worth examining the reach of the blog over time, and the population of readers whom it has touched. The graph of pageviews over time is interesting in this respect. 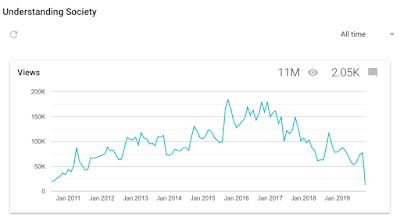 Traffic to the blog increased in a fairly linear way from the beginning date of the data collection in 2010 through about 2017, and then declined more steeply from 2017 through to the present. (The data points are pageviews per month.) At its peak the blog received about 150K pageviews per month, and it seems to be stabilizing now at about 100K pageviews per month. My impression is that a lot of the variation has to do with unobserved changes in search engine page ranking algorithms, resulting in falling numbers of referrals. The Twitter feed associated with the blog has just over 2,100 followers (@dlittle30), and the Facebook page for the blog registers 12,800 followers. The Facebook page is not a very efficient way of disseminating new posts from the blog, though, because Facebook's algorithm for placing an item into the feed of a "follower" is extremely selective and opaque. A typical item may be fed into 200-400 of the feeds of the almost 13,000 individuals who have expressed interest in the page.

A surprising statistic is that about 75% of pageviews on the blog came through desktop requests rather than mobile requests (phone and tablet). We tend to think that most web viewing is occurring on mobile devices now, but that does not seem to be the case. Also interesting is that the content of the blog is mirrored to a Wordpress platform (www.undsoc.org), and the traffic there is a small fraction of the traffic on the Blogspot platform (1,500 pageviews versus 80,000 pageviews).

So thanks to the readers who keep coming back for more, and thanks as well to those other visitors who come because of an interest in a very specific topic. It's genuinely rewarding and enjoyable to be connected to an international network of people, young and old, who share an interest in how the social world works.

Thank you for this sustained work!