Brass on anti-Muslim violence in India 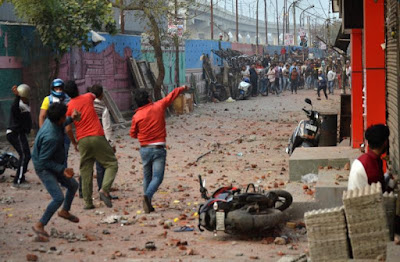 The occurrence of anti-Muslim violence, arson, and murder in New Delhi last month is sometimes looked at a simply an unpredictable episode provoked by protest against the citizenship legislation enacted by the BJP and Prime Minister Modi. (See Jeffrey Gettleman and Maria Abi-Habib's New York Times article for a thoughtful and detailed account of the riots in New Delhi; link.) However, Paul Brass demonstrated several decades ago in The Production of Hindu-Muslim Violence in Contemporary India, that riots and violent episodes like this have a much deeper explanation in Indian politics. His view is that the political ideology of Hindutva (Hindu nationalism) is used by BJP and other extremist parties to advance its own political fortunes. This ideology (and the political program it is designed to support) is a prime cause of continuing violence by Hindu extremists against Muslims and other non-Hindu minorities in India.

Brass asks a handful of crucial and fundamental questions: Do riots serve a function in Indian politics? What are the political interests that are served by intensifying mistrust, fear, and hatred of Muslims by ordinary Hindu workers, farmers, and shopkeepers? How does a framework of divisive discourse contribute to inter-group hatred and conflict? “I intend to show also that a hegemonic discourse exists in Indian society, which I call the communal discourse, which provides a framework for explaining riotous violence.” (24). Throughout Brass keeps the actors in mind -- including leaders, organizers, and participants: “It is one of the principal arguments of this book that we cannot understand what happens in riots until we examine in detail the multiplicity of roles and persons involved in them”. (29) Here are the central themes of the book:


The whole political order in post-Independence north India and many, if not most of its leading as well as local actors—more markedly so since the death of Nehru—have become implicated in the persistence of Hindu-Muslim riots. These riots have had concrete benefits for particular political organizations as well as larger political uses. (6)

The maintenance of communal tensions, accompanied from time to time by lethal rioting at specific sites, is essential for the maintenance of militant Hindu nationalism, but also has uses for other political parties, organizations, and even the state and central governments. (9)

Brass documents his interpretation through meticulous empirical research, including a review of the demographic and political history of regions of India, a careful timeline of anti-Muslim riots and pogroms since Independence, and extensive interviews with participants, officials, and onlookers in one particularly important city, Aligarh, in Uttar Pradesh (northern India). Brass gives substantial attention to the discourse chosen by Hindu nationalist parties and leaders, and he argues that violent attacks are deliberately encouraged and planned.


Most commonly, the rhetoric is laced with words that encourage its members not to put up any longer with the attacks of the other but to retaliate against their aggression. There are also specific forms of action that are designed to provoke the other community into aggressive action, which is then met with a stronger retaliatory response. (24)


What interests are served and what power relations are maintained as a consequence of the wide acceptance of the reality of popular communal antagonisms and the inevitability of communal violence? (11)

(We can ask the same question about the rise of nationalist and racist discourse in the United States in the past fifteen years: what interests are served by according legitimacy to the language of white supremacy and racism in our politics?)

Brass rejects the common view that riots in India are “spontaneous” or "responsive to provocation"; instead, he argues that communal Hindu-nationalist riots are systemic and strategic. Violence derives from a discourse of Hindu-Muslim hostility and the legitimization of violence. Given this view that riots and anti-Muslim violence are deliberate political acts in India, Brass offers an analysis of what goes into "making of a riot". He argues that there are three analytically separable phases: preparation / rehearsal; activation / enactment; and explanation / interpretation (15). This view amounts to an interpretation of the politics of Hindu nationalism as an "institutionalized riot system" (15).


When one examines the actual dynamics of riots, one discovers that there are active, knowing subjects and organizations at work engaged in a continuous tending of the fires of communal divisions and animosities, who exercise by a combination of subtle means and confrontational tactics a form of control over the incidence and timing of riots.” (31)

This deliberate provocation of violence was evident in the riots in Gujarat in 2002, according to Dexter Filkins in a brilliant piece of journalism on these issues in the New Yorker (link):


The most sinister aspect of the riots was that they appeared to have been largely planned and directed by the R.S.S. Teams of men, armed with clubs, guns, and swords, fanned out across the state’s Muslim enclaves, often carrying voter rolls and other official documents that led them to Muslim homes and shops.

Especially important in the question of civil strife and ethnic conflict in any country is the behavior and effectiveness of the police. Do the police work in an even-handed way to suppress violent acts and protect all parties neutrally? And does the justice system investigate and punish the perpetrators of violence? In India the track record is very poor, including in the riots in the early 1990s in Mumbai and in 2002 in Gujarat. Brass writes:


The government of India and the state governments do virtually nothing after a riot to prosecute and convict persons suspected of promoting or participating in riots. Occasionally, but less frequently in recent years, commissions of inquiry are appointed. If the final reports are not too damaging to the government of the day or to the political supporters of that government in the Hindu or Muslim communities, the report may be published More often than not, there is a significant delay before publication. Some reports are never made public. (65)

This pattern was repeated in Delhi during the most recent period of anti-Muslim pogrom. The police stand by while Hindutva thugs attack Muslims, burn homes and shops, and murder the innocent. Conversely, when the police function as representatives of the whole of civil society rather than supporters of a party, they are able to damp down inter-religious killing quickly (as Brass documents in his examination of the period of relative peace in Aligarh between 1978-80 to 1988-90).

Brass is especially rigorous in his development of the case for the deliberate and strategic nature of anti-Muslim bigotry within the politics of Hindu nationalism and its current government. But other experts agree. For example, Ashutosh Varshney described the dynamics of religious conflict in India in very similar terms to those offered by Brass (link):

Organized civic networks, when intercommunal, not only do a better job of withstanding the exogenous communal shocks—like partitions, civil wars, and desecration of holy places; they also constrain local politicians in their strategic behavior. Politicians who seek to polarize Hindu and Muslims for the sake of electoral advantage can tear at the fabric of everyday engagement through the organized might of criminals and gangs. All violent cities in the project showed evidence of a nexus of politicians and criminals. Organized gangs readily disturbed neighborhood peace, often causing migration from communally heterogeneous to communally homogenous neighborhoods, as people moved away in search of physical safety. Without the involvement of organized gangs, large-scale rioting and tens and hundreds of killings are most unlikely, and without the protection afforded by politicians, such criminals cannot escape the clutches of law. Brass has rightly called this arrangement an institutionalized riot system. (378)

Varshney treats these issues in greater detail in his 2002 book, Ethnic Conflict and Civic Life: Hindus and Muslims in India.

Prof. Little,
As a citizen and resident of India, I share your concern regarding the future of plural democracy around the globe, especially in my home country. However, I have to complain that Western analysis of contemporary Indian politics (and society) is very often biased and lacking in sophistication. I don't have the time to write at length about this, therefore I have to link you to some material which might provide you with another perspective. Please have the courtesy to try and understand an opposing viewpoint.

Here are two links from the weblog of Koenraad Elst, a Belgian commentator on India:
http://koenraadelst.blogspot.com/2020/03/quora-censorship-on-delhi-riots.html?m=1