Even worse than we thought ... 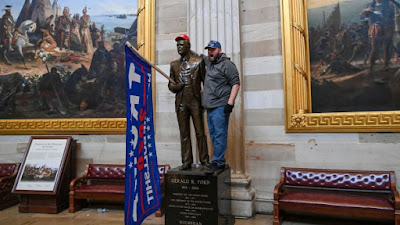 We have understood for quite a while that there are dangerous anti-democratic forces in America today — hate-based organizations, right-wing militias, anti-government extremists, white suprematists, Proud Boys and Boogaloo provocateurs, and Republican politicians who care only about maintaining their political positions and power. And of course, we have a president who has complete contempt and disdain for the values and institutions of a functioning democracy. But up until now we’ve had a certain degree of confidence in the “guard rails” of our democracy -- right up until January 6.
On January 6 it became clear that our democracy is even more at risk than all of this suggests. These risks are of course with us every day, and have worsened steadily since 2016. But on January 6 it became clear that there is a much larger army of shock troops ready for the call by the Leader to attack every aspect of our democracy they can reach. There are the extremist groups monitored by organizations like the Southern Poverty Law Center -- the Three Percenters, the militia groups, the Oath Keepers, the white supremacists. They have not changed their attitudes or purposes, though they have become more bold and visible about their intentions. The insane conspiracy to kidnap and harm the Governor of Michigan seemed vicious but safely on the fringe. Now it seems that these few extremists were just the tip of the iceberg. What has apparently changed is the political world of very large numbers of "ordinary" voters in almost all parts of America.
This seems almost like a form of collective psychosis -- like a witch craze on a massive scale, immune from normal reality checks. People interviewed at the Capitol after the insurrection -- even people who did not enter the building and probably would not have done so -- continue to defend the "revolution" they see underway in the hands of these white supremacists and violent extremists. The sight of many thousands of angry, shouting Trump-ites in their MAGA caps demanding the annulment of an entirely honest election, and seeing the power of this mob to breach and desecrate the US Capitol — and to see the sinister men in the Capitol chambers in military gear and zip ties evidently hunting for high-value hostages — this is to see the threat to our democracy in a wholly different light. This transforms the violent rhetoric of right-wing social media from theatre to script. And there seem to be tens of millions of Americans who are sympathetic to and supportive of these actions.

We know who is responsible for this vast catastrophe: the president’s lies and repetition of unfounded conspiracies, the members of the GOP who have supported and confirmed these lies, the social media platforms that have turned right wing conspiracies into an infectious disease, and media personalities who have built their careers on this kind of conspiracy mongering. And the result is a very sizable part of our citizenry who are entirely disaffected from the values of our democracy and the legitimacy of our government.

It is clear that the role of the police in maintaining order will be critical in the near future. To say that a democracy depends on the security of a system of law is a truism, and when individuals and groups resort to violence in pursuit of their political goals, it is crucial that there should be effective, controlled, and properly managed police to restrain them. It is a fundamental government responsibility to preserve the safety of the public, including in particular the safety of likely targets of terrorist violence. This means that government buildings — state houses, the Capitol, government office buildings —must be protected. It is therefore astounding that legislators in states like Michigan have so far been incapable of summoning the political will to ban weapons from the Michigan state house — creating the possibility that the next invasion of the state house in Lansing will lead to bloodshed by men armed with semi-automatic rifles. When armed groups threaten to use violence against other citizens, against the representatives of the state, and against our political institutions, it is inescapable that a democracy requires the ability to use police force to defeat that violence. And it goes without saying -- a democracy requires a properly regulated system of policing that assures lawful exercise of force, neutral and unbiased enforcement of the law, and an effective and vigilant commitment throughout the policing hierarchy to controlling the misuse of force by police officers.

This also means appropriate use of intelligence gathering about violent groups and their intentions: when groups announce their intention to attack officials, citizens, or locations, it is a responsibility of law enforcement agencies to gather and assess information about these indications of plans for future action. Here too a democracy requires legal constraints -- which we have in the US system of constitution and law -- but it is frankly incomprehensible that Federal and local police authorities were unaware of threats of violence in the weeks preceding January 6 that were fully visible to a number of domestic terrorism research centers around the country.

Effective policing is a necessary condition for social stability; but it is only a beginning. It is crucial for our country -- leaders, organizations, parties, and citizens -- to regain our footing in a commitment to truth rather than lies, evidence-based assessments rather than conspiracy theories, and a level of toleration and trust that should be the starting point for the great majority of our population. At the moment neither condition is satisfied: the Trump movement is driven by conspiracy theories and lies, and its followers have essentially zero levels of toleration and trust for the other members of our society -- both political leaders and ordinary citizens -- who do not share their worldview. It is crucial to reverse this reality -- and yet it is very hard to see how that is going to happen, when the far right continues to maintain the same lies about corruption, election theft, and betrayal that produced this level of disaffection in the first place.

A very good start would be a breakup of the Republican Party between those Republicans who believe in the conservative values of the GOP and those who wish to continue to espouse far-right, white supremacist and extremist political views. There are clearly a good number of elected Republican officials who would be ready to follow such an initiative towards a re-establishment of a sane conservative political party. Let them stand for their political and social values, and let them speak honestly about the values of our constitutional democracy and the crucial priority of truth in political speech. Conservativism should not be the same as hate, it should not endorse racism, and it should support rather than undermine the values of our constitutional democracy.

A second valuable step would be election reforms that increase voter access and participation, decrease gerrymandering, and institute voting systems that work to decrease the importance of party affiliation and the primary process. Alaska's newly implemented rank-choice voting system is a good example. It is well recognized that our current system of primaries -- within the setting of gerrymandered districts -- favors extreme candidates over more moderate candidates.

There is the deeper question still to be answered: what are the circumstances in the United States over the past several decades that have led to such a dissolution of support and adherence to democratic norms and values within much of our population? Any observer is likely to identify many of the same factors: the facts of our multi-ethnic, multi-racial society; growing economic insecurity and inequality for large numbers of people; and the rise of unprincipled politicians on the right who have been willing to use hate-based appeals to generate support for their own political fortunes. It is crucial to rebuild mass support for our multi-ethnic and multi-racial democracy, and increasing economic opportunity and justice is one important pathway for doing so.
Posted by Dan Little at 2:02 PM

And about BLM and Antifa and their recent collective actions in Portland and Seattle --- do we take that to mean you approve of left wing violence?