Classification of political systems and theories 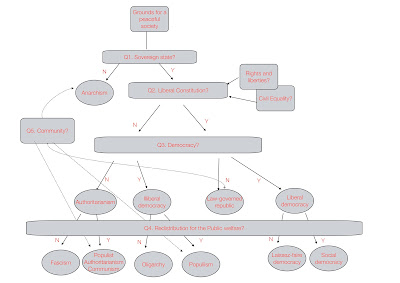 Hobbes has a decisive answer to this question, based on his analysis of the state of nature. But it is also possible to make a case for a human community based on free cooperation among equals (anarchism).
2. Must a legitimate state provide strict protections of individual rights and liberties? (constitution)
Locke and Jefferson argued for the necessity of establishing protections of central rights and liberties that were essentially protected from legislation by the sovereign state -- a constitution.
a. Are there distinct limits to the exercise and purpose of state power? (constitutionality)
b. Do these limits create constraints on the kinds of legislation that can be adopted by a majority of citizens for the whole of society?
The most common view of the content of a governing constitution for a legitimate state is the idea that it should embody the moral facts of liberty and equality for all citizens. But what does liberty involve? And what kinds of equality must be protected? Here are a few possible answers to the latter question.

a. Equality of worth and treatment
b. Civil and legal equality
c. Equality in opportunities to fulfill human capacities and plans
3. Is majority rule morally mandatory in a just state? (democracy)
Is democracy required in a legitimate state, given the moral realities of human beings in association with each other? Is majority rule morally superior to other possible political decision rules -- dictatorship, oligarchy, random assignment of citizens to positions in government, ....?
What moral principles are involved in defending the idea that a majority is entitled to impose its will on a minority with respect to various issues of public policy?
4. Are there moral reasons for concluding that a just state must embody programs to ensure the basic needs of all citizens -- health, education, old age, decent housing, adequate nutrition? (public good)
a. Does the moral equality of all citizens create a broad social requirement that all citizens should be in a position to realize their human capacities and freedoms?
b. Do all members of society have obligations of concern for each other?
c. Is a society with extensive welfare provisions more politically stable and cohesive than one without those provisions?
d. Is a society with extensive welfare provisions more economically efficient and progressive than one without those provisions?
5. Do groups, nations, religious communities, classes, or races have independent moral value, over and above the value of the individuals who compose the population? (community)
a. Do citizens owe something to their fellow citizens (beyond not violating their constitutional rights)?
b. Should the state encourage or incentivize involvement in voluntary civil associations?
c. Can / should important collective tasks be left to the authority and competence of community associations?
The graph provided at the top of the post represents a tree diagram of kinds of political theories, depending on the YES/NO answers that a give theory provides to these questions.
If we conclude with Hobbes that a sovereign state is needed in order to secure public order and security in a society of independent and free individuals, then we are committed to the idea of a coercive state and system of law. If we reject that position, then we end with anarchism. (See Robert Paul Wolff's brilliant In Defense of Anarchism for coherent arguments along these lines.) As a next step, we ask whether there are moral limits on the scope of the state. Does a legitimate state require a constitution guaranteeing the rights, liberties, and equality of citizens? If yes, should the constitutional order be governed by majority rule (within the constraints of the constitutional protections)? if yes, then we get liberal democracy.
We can next ask the question about the need for state-funded programs to ensure the basic needs of all citizens and protecting against life's unfortunate contingencies (illness, unemployment, disability, old age). If yes, we get social democracy (or the welfare state). If no, we get the classic laissez-faire constitutional democracy, the minimal state.
Taking the anti-democratic route through the tree, we get various forms of authoritarianism and illiberal democracy; and depending on the answer to the question of redistribution for public wellbeing, we get fascism, populist authoritarianism, oligarchy, and populism.
The question of the moral importance of community is to some extent separate from this series of distinctions. But it can be related to a number of the outcomes in the diagram -- on both the conservative and the progressive side of the spectrum. Philosophers defending anarchism have argued for the ability of a community of equals to find cooperative ways of handling its social life. Republicanism attributes independent value to the whole, over and above the value of the individual citizens. Populism in its various versions highlights the primacy of specific groups (racial, ethnic, national, gender, ...). And communism puts the future of society as a whole ahead of the importance of individuals in society.
One consistent set of political values leads us through this tree to a particular solution: the favored political system should be a constitutional social democracy. If we favor individual freedom, human equality, democracy, and social wellbeing, then what John Rawls refers to as a "property-owning democracy" (link) is the best solution. This system can be spelled out simply:

a. Constitutional guarantees of full and equal rights and liberties as citizens
b. Economic life is carried out in a market economy regulated to ensure fair equality of opportunity.
c. Taxation to ensure inequalities of wealth do not create inequalities of dignity and fulfillment of capacities
d. Public provision (tax-financed) of reasonably high level of basic needs -- food, shelter, education, healthcare

This amounts to Rawls's two principles of justice and his argument for a property-owning democracy (Rawls, Justice as Fairness). The liberty principle ensures the first point and the difference principle ensures the second point. The constraints involved in the idea of a property-owning democracy provide a solution to the apparent tension between liberty and equality.
Posted by Dan Little at 11:32 AM