Gross economic inequalities in the US 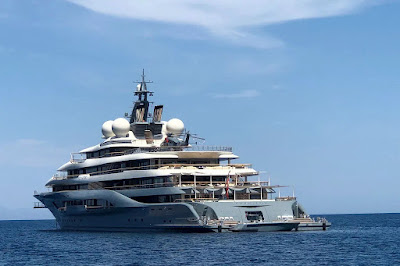 An earlier post (link) highlighted the growing severity of inequalities of wealth and income in the United States, as well as Elizabeth Warren's very sensible "billionaire" tax proposal. According to a 2020 article in Forbes, "According to the latest Fed data, the top 1% of Americans have a combined net worth of $34.2 trillion (or 30.4% of all household wealth in the U.S.), while the bottom 50% of the population holds just $2.1 trillion combined (or 1.9% of all wealth)" (Forbes, link). That bears repeating: 1% of Americans own 30.45% of wealth in the United States, while the bottom 50% owns under 2% of wealth. Those disparities in wealth have worsened during the past two years of pandemic. The Forbes story notes that Elon Musk's wealth increased from $100 million to $240 million in the first eight months of 2020, and Jeff Bezos' wealth increased by $65 billion in 2020.

A recent story in the New Yorker on mega-yachts underlines the obscene imbalance that exists between the super rich and the rest of us. Evan Osnos' "The Floating World" offers a glimpse into the mega-luxury and consumption associated with super-yachts (link). Much of the world's attention to super-yachts has gravitated to the Russian oligarchs and the economic sanctions that have resulted in seizure of a number of multiple-hundred-million dollar ships around the world. But of course, it is not only Russian oligarchs who have captured their nations' wealth. Oligarchs and billionaires from the United States, Europe, the Middle East, and Central America are part of the same bleak picture.

The level of consumption on luxury involved in the world of super-yachts in the article is obscene in the original sense of the word; it is a conspicuous display of wealth that makes one sick. The idea that a single individual or family would have the financial ability to purchase a 500-million dollar ship (limited by maritime law to carrying only 12 guests and unlimited crew) is grotesque. (Osnos quotes a luxury yacht industry estimate that the annual cost of maintaining a mega-yacht is 10% of its purchase cost. So a half-billion dollar ship requires $50 million in annual maintenance.) And this grotesquerie is especially stark in a world where global and national poverty are persistent obstacles to free human development for the world's population and climate change imperils everyone. (Osnos notes that experts estimate that "one well-stocked diesel yacht is estimated to produce as much greenhouse gas as fifteen hundred passenger cars".)

It is impossible to describe the situation of wealth inequality in the United States as anything other than a "laissez-faire robber baron regime" of wealth creation and consumption. We functionally have no effective tax policy that constrains the accumulation of hundreds of billions of dollars by a small number of individuals and families.

Here is a very interesting video panel organized by the Brookings Institution on the current status of wealth-tax proposals (link). Especially interesting in the discussion is the emphasis on wider positive effects of a wealth tax, including a shift in political power and an enhancement of racial and gender equity.

So what about the rest of us -- the population falling below the 90th-percentile of income? Here is a graph of recent income-distribution data by select percentiles (link): 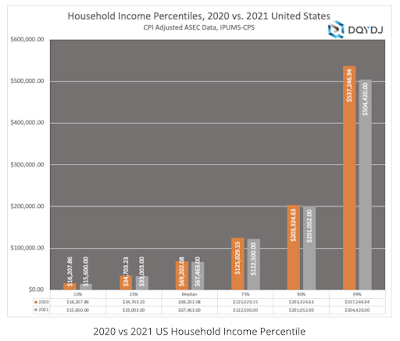 Several things are apparent from this graph of income distribution. (It is important to recall that the distribution of wealth is much more extreme than the distribution of income.) First, the median household income (50th percentile of households) is $67,463. This is just under 2.5 times the Federal poverty level for a household of four individuals. This income is pre-tax; so the monthly budget of the median household is roughly $4,000 per month. This is a very tight budget that must cover all expenses: housing, food, transportation, clothing, healthcare, and so on. It is clear that households at the 50th percentile are financially struggling, and are unlikely to be able to afford a mortgage on a house. These Americans are also likely to be unable to save significantly, including savings for future educational costs for their children. Second, the 99th-percentile household income is about 7.5 times the median household income. A family with over $500,000 household income has no month-to-month financial constraints; it is not difficult to save significant resources over time; and owning property for this household is entirely feasible.
What would a more equitable world look like? Robert Lynch attempts to construct a rough estimate of the economic benefits of achieving economic equity across racial, ethnic, and gender lines in "The economic benefits of equal opportunity in the United States by ending racial, ethnic, and gender disparities" (Equitable Growth, link). Here are the reforms that Lynch believes are crucial for substantive progress on equality of opportunity without regard to race, ethnicity, or gender:

To achieve an equal-opportunity society where there are no barriers to economic success that are the consequence of race, ethnicity, or gender disparities would obviously require tackling overt racism and sexism.

But true equal opportunity requires more than that. It involves addressing many other disparities that undermine worker productivity, such as unequal access to jobs, education, credit in the form of home mortgages and business loans, affordable child care, high-quality pre-Kindergarten, and senior care; inconsistencies in family leave and workplace policies and in treatment in the justice system; imbalances in access to healthcare and insurance; unequal exposure to damaging levels of environmental pollutants; and inadequate and unequal access to high-quality physical infrastructure, which is essential to maximizing economic efficiency.

Here is his conclusion:

The U.S. economic consequences of eliminating racial, ethnic, and gender inequalities are large, particularly for individuals of color and women. The total earnings in the nation would swell well beyond what they currently are, and the incomes of Black, Hispanic, and Asian workers would be substantially higher. The largest earnings gains would be experienced by non-Hispanic White, Black, Hispanic, and Asian women.

Whose wealth is it anyway? The libertarian laissez-faire ideology is that the "creators" of wealth are solely responsible for this wealth, and it morally and legally belongs to them. But a much more credible view is that a national economy is a vast and extended system of economic cooperation, with a substantial "social product" that should not be captured by a small number of strategically located actors. The term "rent-seeking" appears to apply perfectly here. There is also the familiar but spurious argument that vast inequalities are needed in order to generate incentives for productivity and innovation. This argument is spurious: first, much innovation comes forward from ordinary participants in economic activity who rarely see financial benefits from their innovations; and second, it is laughable to imagine that only the prospect of a $200-billion windfall would motivate an "entrepreneur" to his or her wild and crazy new ideas. Would the prospect of a billion-dollar windfall not work as an incentive? Would $100 million not work? Ha! The idea of the moral or economic inevitability of unlimited wealth accumulation is simply self-serving ideology.

In large strokes the Warren wealth tax proposal represents a moderate tax on the super-rich; and it could have a very large impact on a range of issues of political stability, economic equity, and equality of opportunity that are crucial for the future of our democracy.

Have we given up on improving equality of opportunity?