What is a peasant? 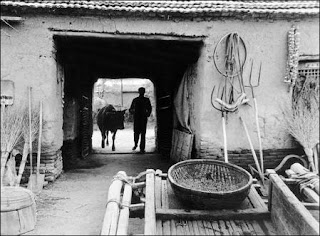 Quite a bit of China's history has been framed in terms of the role of the "peasant" in Chinese society. Historians consider the features of the peasant economy; they examine the occurrence and dynamics of peasant rebellions and peasant mobilization; they ask about peasant culture and consciousness. What is a peasant? Is it a sociologically useful concept?

To start, we might consider a simple definition. A peasant is a smallholding farmer, producing crops for family consumption and for market exchange, using family labor throughout the farming cycle. Peasants live in villages; they engage in face-to-face relations with neighboring farmers; they possess a diverse range of cultural and religious beliefs and practices; they fall within a diverse range of social networks and local organizations (kinship organizations, temples, labor-sharing networks). (Robert Netting's Smallholders, Householders: Farm Families and the Ecology of Intensive, Sustainable Agriculture

So peasants are farmers. But even within a society that is largely rural with a high percentage of smallholding farmers, there is still substantial social diversity within local society. Small traders, necromancers, martial arts instructors, bandits, minor officials, priests, moneylenders, elites, scholars, and large land owners all play roles within a peasant society -- but they are not peasants. Their incomes derive ultimately from the farm economy, but their lifestyles, standards of living, values, and social status are all distinct from those of peasant farmers. So there is occupational diversity within rural society in almost every part of China, and a "peasant society" consists of many people who are not themselves "peasants".

The definition of the peasant just offered focuses on the occupational or material situation of the individual. It is not surprising, then, that materialist social theory has given particular emphasis to the category of "peasant society" as a potentially explanatory social category. Marxist analysis gives substantial importance to the situation of peasants and workers, and other non-Marxist materialist thinkers have done so as well.

But we can reasonably ask whether this set of "existential" facts have very much to do with a person's mentality and political behavior. Recall the very great range of social environments in which farming takes place in China -- from the rice paddies and deltas of the lower Yangzi, to the wheat farms of Hebei and Shandong in the north, to the mountainous plots of Yunnan in the southwest. Recall as well the cultural diversity that occurs across this range -- different ethnic groups, different local traditions, different religious and lineage practices. So it is worth asking the question, to what extent do members of village society share a peasant consciousness, simply in virtue of their social position as farmers? Is there any reason to believe that the material factors that define one's status as "peasant" are more fundamental to consciousness than the cultural or ethnic factors having to do with one's immediate social milieu? Does the peasantry constitute a distinct social group?

There are some shared features of peasant experience that would provide a partial answer to this question. First is the common experience of insecurity. Farmers are more vulnerable than most economic groups to the vagaries of weather, water, and soil. Second is the fact of surplus extraction. Because they are the most numerous group in most traditional societies, the state and other powerful agents in society have an interest in extracting part of the peasant's surplus from him/her. This occurs through rent, interest, and taxation. And it is a commonplace that the peasant's life is often held hostage to predatory surplus extraction. Peasants are close to be bottom of the ladder when it comes to power, status, and influence -- so they are vulnerable to exploitation.

These considerations suggest that there is in fact an important basis of group mobilization that is associated with one's status as "peasant". Farmers share an interest in famine relief, drought assistance, and collective action against predatory taxation or rent increases; so their status as peasants may contribute to deliberate efforts aimed at the development of class consciousness and group identity formation. Peasant organizations may emerge that deliberately cultivate political action and consciousness around peasant issues. And this in turn suggests a more complicated answer to the primary question here: one's status as a peasant may not determine one's outlook on the social world or one's mentality; but the struggles associated with making a life within the context of rents, taxation, drought, and famine may lead to the forging of a peasant consciousness that does in fact influence political behavior and solidarity.
Posted by Dan Little at 11:28 AM

Really helpful article.researching on works of pearl s buck on peasants of china.plz help me as to which critical theories to consider.