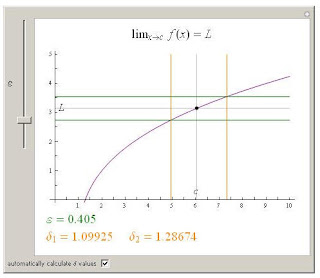 Throughout much of our social experience we expect continuity: tomorrow will be pretty similar to today, and when changes occur they will be small and gradual. We expect our basic institutions -- economic, social, and political -- to maintain their core characteristics over long periods of time. We expect social attitudes and values to change only slowly, through gradual evolution rather than abrupt transformation. And we expect the same of a range of social conditions -- for example, highway safety, crime rates, teen pregnancy rates, and similar social features.

It is evident that this expectation of gradual, continuous change is not always a valid guide to events. Abrupt, unexpected events occur -- revolutions, mass cultural changes like the 1960s, sweeping political and legislative changes along the lines of the Reagan revolution. And of course we have the current example of abrupt declines in financial markets -- see the graph of the Dow Jones Industrial Average for the week of September 23-30, 2008 below. So the expectation of continuity sometimes leads us astray. But continuity is probably among our most basic heuristic assumptions about the future when it comes to our expectations about the social world and our plans for the future. 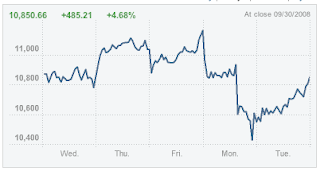 Take first the stability of large social and political institutions. Is there a reason to expect that major social and political institutions will retain their core features in face of disturbing influences? Consider for example the SEC as a financial regulatory institution; the European Union as a multinational legislative body; or a large health maintenance organization. Here institutional sociologists have provided a number of important insights. First, institutions often change through the accumulation of a myriad of small adaptations in different locations within the institution. This is a process that is likely to give rise to slow, continuous, gradual change for the institution as a whole; and this is continuous behavior. Second, though, institutional sociologists have identified important internal forces that work actively to preserve the workings of the institution: the stakeholders who benefit from the current arrangements. Stakeholders are given incentives to actively reinforce and preserve the current institutional arrangements -- the status quo. Both of these factors suggest that institutional change will often be slow, gradual, and continuous.

Consider last the example of social measures such as crime rates or teen pregnancy rates. If we take it as a premise that crime and teen pregnancy are influenced by social factors that in turn influence the behavior of individuals, and if we take it that these background social factors change slowly and continuously -- then it is credible to reason that the aggregate measures of the associated behaviors will change slowly and continuously as well. The reasoning here is probabilistic: when large numbers of people with a specified set of background social psychologies are exposed to common environmental circumstances, then it is plausible to predict that the average rate of teen pregnancy will remain fairly steady if the background circumstances remain steady.

These are all reasons for expecting a degree of stability and continuity in social arrangements and social behavior. But before we conclude that the social world is a continuous place, consider this: We also have some pretty clear models of how social phenomena might occur in a dis-continuous fashion. Critical mass phenomena, tipping points, and catastrophic failures are examples of groups of social phenomena where we should expect discontinuities. The behavior of a disease in a population may change dramatically once a certain percentage of the population is infected (critical mass); a new slang expression ("yada yada yada") may abruptly change its frequency of useage once a certain number of celebrities have adopted it (tipping point); a civic organization may be stretched to the breaking point by the addition of new unruly members and may suddenly collapse or mutate. (The hypothesis of punctuated equilibrium brings this sort of discontinuity into Darwinian theory of evolution.)

So there are some good foundational reasons for expecting a degree of continuity in the social environment; but there are also convincing models of social behavior that lead to important instances of discontinuous outcomes. This all seems to lead to the slightly worrisome piece of advice: don't bet on the future when the stakes are high. Stock markets collapse; unexpected wars occur; and previously harmonious social groups fall into fratricidal violence. And there is no fool-proof way of determining whether a singularity is just around the corner.
Posted by Dan Little at 4:55 PM

Positive feedback actions could be turned into negative feedback based on competition, which is the foundation mechanism of free market economy. But now we know that market could dysfunction under some circumstances, and these circumstances are beyond the imagination of social governors. The current financial crisis in Wall Street is a good example.

We need to make citizens aware that the world needs negative feedback to make our life better. Until this change is made, we will have more discontinuity to deal with.