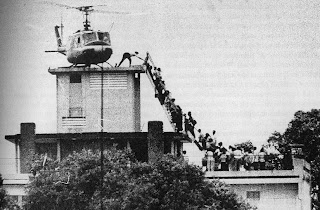 Often what is announced as a turning point eventually seems like a change without a difference -- an example of rearranging the deck chairs on the Titanic, of changing drivers but not direction. Nguyen van Thieu takes office in Vietnam in 1967 and a new era is announced; but then the same old policies persist and Vietnam slides ever further towards Communist victory.

A turning point might be defined as an event, action, or choice, that profoundly alters the direction of a whole series of subsequent events. The New Deal is perhaps a candidate in the development of the political-social culture of the United States -- a new set of policies, laws, and strategies that set the United States on a new direction and that substantially constrained later choices by government. The notion of a turning point conveys the situation of contingency -- up until T things might have continued within the existing pattern P, but after T things shifted to P'. And it conveys the idea of path dependency as well -- now that the turning point has occurred and P' is embodied, it is much more difficult to return to P. So a turning point results from some contingent event that occurs within a system at a particular time and substantially inflects the future dynamics of development of the system. The idea turns on the background assumption that there are mechanisms or forces that sustain the development of the system, and that contingent events can "push" the system onto a different course for a while.

What sorts of things can have turning points? Can an individual have one? What about a family or a marriage? How about a business or a university? And how about a nation or a civilization? We might say that anything that has a recognizable and somewhat stable pattern of development can display a turning point. So each of these orders of human affairs can do so. An individual may be influenced by a traumatic event or a charismatic person and may change his ways; from that point forward he may behave differently -- more honestly, more cautiously, more compassionately. The event was a turning point on his development. A "velvet revolution" may be on a course that gives great importance to non-violent tactics. Then something happens -- a violent repression by the state, the emergence of a new clique of leaders more open to violence. The velvet revolution undergoes a turning point and becomes more violent in its strategies.

So how could we know that we're at a turning point? The answer seems to be: we can't. Only the larger course of history can indicate whether contemporary changes will be large and persistent, or cosmetic and evanescent.

The idea of a "turning point" is perhaps one of the analytical categories that we use to characterize and analyze the sweep of history. It is a narrative device that highlights persistence, contingency, and direction. And, it would appear, we've got to wait until the Owl of Minerva spreads its wings before we can say with confidence when they occur.
Posted by Dan Little at 2:23 PM