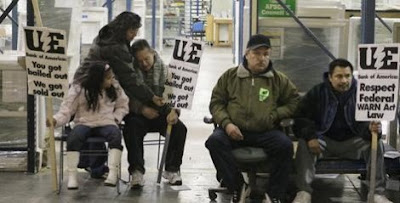 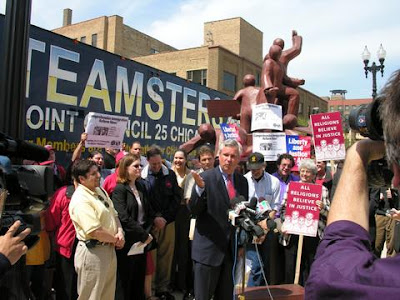 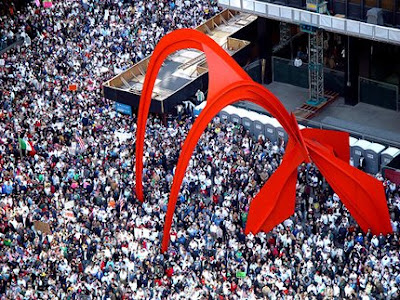 Are there social classes in America?

In order to answer the question in the affirmative, we would need to determine whether there are major social groups that are defined by their position within the economy, who share --
Does American society possess groups with these characteristics? Or, in the negative, is the American population so homogeneous (or possibly, so heterogeneous) in values, interests, culture, and politics, that the concept of class has no bearing today?

There are certainly occupational groupings in the American workforce. The United States Department of Labor makes use of a hierarchical classification of jobs in the U.S., with 23 major groups. These include management occupations, business and financial operations, computer and mathematical operations, architecture and engineering operations, food preparation and serving occupations, community and social service occupations, legal occupations, education, training, and library occupations, healthcare support occupations, and, eventually, production occupations. Within production occupations there is a further differentiation of jobs among supervisors, production workers, assemblers, fabricators, food processing workers, and so on for dozens of other sub-categories. So there is certainly a very clear occupational structure to the American economy, and the sociological pathways that convey an individual into a particular location within this structure are well-defined and impactful on the future quality of life of the individual.

So we might consider classifying these occupations according to some higher-level categories and then constructing a theory of social classes around them: management, unskilled labor, skilled labor, professional labor, white collar, blue collar, pink collar, manufacturing, service, agriculture. (See a prior posting for an effort along these lines.) And we might consider whether some of these groupings have the cohesion and sociological interconnectedness to constitute a "class". Are unionized, blue-collar, industrial workers a "class"? Are non-unionized service workers a class? Are accountants, architects, and engineers a social class? Are nurses and other healthcare workers a class? Are mid-sized family farmers a social class? And for that matter, are the owners and top managers of banks, investment companies, and financial firms a class? These are fruitful questions, and they begin in a recognition of the complex occupational structure of the U.S. economy. Occupations have large impact on worldview, values, quality of life, and political behavior.

Second, there is certainly a great deal of persistent social stratification in the U.S. The probability of a child's remaining in the quintile of the income distribution where his parents found themselves is high; so the position of a family within the distributive system is fairly stable over time. And position within the income distribution has major consequences for a family's level of consumption and quality of life. Being persistently "near-poor" is a situation of deprivation and insecurity that is sharply different from the life situation of the moderately affluent. So we might consider several large social groups based on income -- the extremely poor, the working poor, the middle-income, the rich, and the super-rich. Within each of these categories of society defined by income we are likely to find some characteristic features of lifestyle, values, and existential dilemmas. So the basic structure of stratification of social goods such as income, health status, and education might serve to define large social "classes."

Third, it would appear that there are clusters of values, styles, and mental frameworks that correspond to different economic segments of American society. This is the cultural dimension of the social reality of class. Patterns of use of leisure time, attitudes towards education, membership in different kinds of civic organizations, and attitudes towards other nations seem to distinguish social groups in America. So we might attempt to delineate social classes on the basis of clusters of values and mental frameworks. And this approach can certainly be approached empirically, through administration of instruments such as the World Values Survey and domestic equivalents. To what extent do studies like these demonstrate significant inter-group differences within the United States?

Fourth, it seems likely that there are differentiating patterns among various social groups based on the patterns of social relationships that exist within the group, that would be revealed by maps of social networks. And it seems probable that the distinct groups that emerge will have important economic relationships in common. (Here is an interesting slide presentation by Valdis Krebs that illustrates some suggestive applications of social network analysis.) Here is a hypothetical study that couldn't really be performed but may be interesting as a thought experiment. Suppose we ask everyone in an urban population for the names of 5 non-family members upon whom they could call in an emergency to perform an important favor. Now draw the network map that results from this survey. Are there "islands" of separate sub-populations that can be discovered, where the great majority of links fall within the island and only a small number extend across to another island? And are these islands related in some important way to economic situation and status of the individuals who are included? Would this study map out groups that could be identified as "social classes"? It seems likely that the answers to these questions are affirmative.

Each of these is a different starting-place for a sociological analysis of social class in America. And if the theory of class is correct, we would expect that these different starting places would begin to converge around the same large social formations: occupations, incomes, cultures, and social networks may all call out the same large social groups.

Ultimately, the theory of class has to do with collective interests. We might say that the fundamental interests of a group involve income, job security, healthcare, opportunities, and pensions. A more intangible set of interests have to do with a demand for fair treatment in economic decision-making and a need for a sense of self-determination. And it is plain that there are business decisions and public policy decisions that are being made today that affect these interests very differently for different groups. This suggests that there are in fact large groups in American society whose members have shared interests with each other and who can be mobilized in political action in support of these interests. And this begins to suggest that class remains a social reality in America -- and one that may become more politically salient rather than less in the coming decade or so.

What cannot be forgotten, though, is the fact that economic structures are only one aspect of the social mechanisms of distribution and control through which individuals' status is determined. The mechanisms of race, ethnicity, migration, and gender all affect individuals' core interests in ways that are somewhat independent from the structures of property and class we've been highlighting. And this has important consequences for political mobilization as well; it means that political affinities and action may be organized around race and ethnicity as readily as they are around wage labor and capital -- witness the massive immigration rallies that took place in 2007, pictured above in the third image.
Posted by Dan Little at 9:00 AM

I am glad to have found your blog (via http://economistsview.typepad.com/). Class is still sadly underdiscussed in the blogosphere (for the readily apparent reasons). I am about to go look at your schematic below.

I was thinking about questions of the real and the instrumental in this realm too. I teach literature and think about the question of why I teach what I teach and how my class influences my decision. If I teach "the classics" it is not only that they are a source of universal wisdom (a la Allan Bloom) but that they have an instrumental value in understanding later works of art. The Bible and Shakespeare and Plato are foundational -- later works refer to them. Thus if your education in this regard is scanty, you will never really belong to the class of educated people who share a certain "common culture" as you put it.

Funny that Classic and class share the same root.

RA-- thanks for the comments. I think the question of how a liberal education fits into our contemporary society is a pretty interesting one. Why study literature or philosophy? Is it to learn real concrete skills of imagination, interpretation, and argument? Or is it to distinguish oneself from the other students in technical schools who are on track to enter other parts of the class status hierarchy? I'd say it's the former -- but there certainly is a class marker that accompanies a liberal arts degree. There are a couple of postings elsewhere here and in ChangingSociety on education you may find interesting.