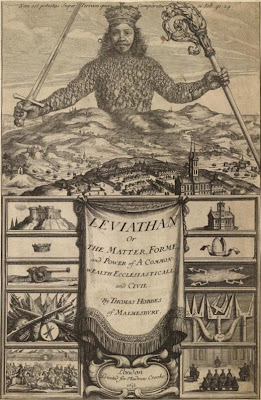 Here is a surprising idea: of all the modern political philosophers, Thomas Hobbes comes closest to sharing the logic and worldview of modern social science. In Leviathan (1651) he sets out the problem of understanding the social world in terms that resemble a modern institutionalist and rational-choice approach to social explanation. It is a constructive approach, proceeding from reasoning about the constituents of society, to aggregative conclusions about the wholes that are constituted by these individuals. He puts forward a theory of agency -- how individuals reason and what their most basic motives are. Individuals are rational and self-concerned; they are strategic, in that they anticipate the likely behaviors of other agents; and they are risk-averse, in that they take steps to avoid attack by other agents. And he puts forward a description of two institutional settings within which social action takes place: the state of nature, where no "overawing" political institutions exist; and the sovereign state, where a single sovereign power imposes a set of laws regulating individuals' actions.

In the first institutional setting, he argues that individual competition in the context of the absence of sovereignty leads to perpetual violent competition. In the second institutional setting, he argues that individual self-striving within the context of a system of law leads to the accumulation of property and peaceful coexistence.

Here are some of Hobbes's premises about individual agents from chapter XIII of Leviathan:

From this equality of ability ariseth equality of hope in the attaining of our ends. And therefore if any two men desire the same thing, which nevertheless they cannot both enjoy, they become enemies; and in the way to their end (which is principally their own conservation, and sometimes their delectation only) endeavour to destroy or subdue one another. And from hence it comes to pass that where an invader hath no more to fear than another man's single power, if one plant, sow, build, or possess a convenient seat, others may probably be expected to come prepared with forces united to dispossess and deprive him, not only of the fruit of his labour, but also of his life or liberty. And the invader again is in the like danger of another.

So that in the nature of man, we find three principal causes of quarrel. First, competition; secondly, diffidence; thirdly, glory. The first maketh men invade for gain; the second, for safety; and the third, for reputation. The first use violence, to make themselves masters of other men's persons, wives, children, and cattle; the second, to defend them; the third, for trifles, as a word, a smile, a different opinion, and any other sign of undervalue, either direct in their persons or by reflection in their kindred, their friends, their nation, their profession, or their name.

The passions that incline men to peace are: fear of death; desire of such things as are necessary to commodious living; and a hope by their industry to obtain them. And reason suggesteth convenient articles of peace upon which men may be drawn to agreement. These articles are they which otherwise are called the laws of nature, whereof I shall speak more particularly in the two following chapters.

And these motives and forms of behavior by individuals lead to a predictable outcome for the collectivity in the state of nature: a war of all against all.

Whatsoever therefore is consequent to a time of war, where every man is enemy to every man, the same consequent to the time wherein men live without other security than what their own strength and their own invention shall furnish them withal. In such condition there is no place for industry, because the fruit thereof is uncertain: and consequently no culture of the earth; no navigation, nor use of the commodities that may be imported by sea; no commodious building; no instruments of moving and removing such things as require much force; no knowledge of the face of the earth; no account of time; no arts; no letters; no society; and which is worst of all, continual fear, and danger of violent death; and the life of man, solitary, poor, nasty, brutish, and short.

This is an institutionalist argument. It models the behavior that is expected of a certain kind of agent within a certain kind of institutional setting; and it projects the consequences of these "microfoundations" for the aggregate society. In other words, Hobbes is offering a micro- to macro-argument based on analysis of modes of agency and assumptions about a particular institutional context.

So the logic of Hobbes's argument is fairly clear; and it is deeply similar to that of institutionalist rational-choice theorists. Thomas Schelling's title, Micromotives and Macrobehavior

It is not a profound criticism of Hobbes's philosophical analysis to quarrel with Hobbes's specific assumptions about what is possible within the state of nature. And in fact, a number of contemporary political scientists argue that it is possible for men and women to create non-political institutions within the context of what Hobbes calls the state of nature. Coordination and cooperation are indeed possible within a "state of nature"; it is possible to achieve coordination within anarchy. From a sociological point of view, this is really a friendly amendment; it simply adds a further premise about the feasibility of certain kinds of cooperation. So the "cooperation within anarchy" criticism of Hobbes is advanced as a substantive argument about the feasibility of durable social institutions that do not depend upon a central coercive authority. And it depends upon several specific assumptions about the circumstances and mechanisms through which local groups of people can establish self-enforcing forms of cooperation that overcome free-riders and predatorial behavior. It is likely enough that Hobbes would not have been persuaded by this argument; but ultimately it is an empirical question.

Several arguments against Hobbes's conclusions about the state of nature are especially valuable from this point of view. First, I find Michael Taylor's arguments in Community, Anarchy and Liberty

particularly convincing -- essentially, that peasant communities have traditionally found ways of creating and sustaining cooperative institutions and relationships that persist without the force of law to stabilize them. "Contracts" backed by legal systems are not the only way of establishing coordination and cooperation among independent agents. Robert Netting provides relevant examples in Smallholders, Householders: Farm Families and the Ecology of Intensive, Sustainable Agriculture

, around traditional forms of labor-sharing and seasonal cooperation. And Elinor Ostrom and her collaborators make similar arguments in their historical and sociological studies of "common property resource regimes" -- essentially, stable patterns of cooperation maintained by local voluntary enforcement rather than central legislation (Governing the Commons: The Evolution of Institutions for Collective Action). Ostrom documents dozens of important historical cases where traditional communities have managed fisheries, forests, water resources, and other common properties without having a central state to support these patterns of cooperation and coordination.

But these are empirical and theoretical refinements to a fundamentally coherent model of social explanation that is full-fledged in Hobbes's work in the mid-seventeenth century: explain aggregate (macro) social outcomes as the result of mechanisms and actions at the level of individual actors.
Posted by Dan Little at 8:58 PM

Compare Hobbes' model of order as resulting from institutional, juridical administration and enforcement with any number of alternative frameworks outside of the liberal canon and we'll see that law is only one of many possible social forms. In liberal political thought--Hobbes, Locke, and Rousseau especially--the law is referred to as what Foucault calls a "domain of truth," an epistemological-ontological order that legitimates or verifies a particular set of actions. Foucault stands as yet another example of a thinker who (barely, and with his final breaths) began to articulate for the first time in the modern era an extra-juridical concept of the social. Not law, but ethics, attention to the moral qualities of relations, not atomistic individuals colliding in battle.

Please keep up the fantastic and diverse writing. Always a pleasure.