Philosophical frameworks in the social sciences 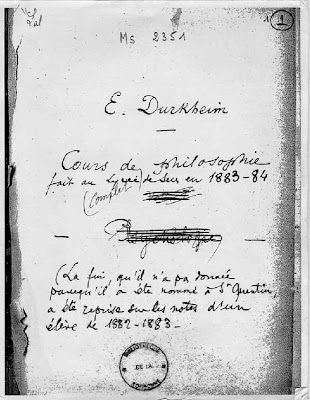 It is fairly evident that there were substantive ontological assumptions about how the social world worked that guided the founders of sociology: individuals create social outcomes (Mill), norms and values have a superordinate role in social action (Durkheim), the problem of social order is the fundamental problem for sociology (Durkheim), crises are common within capitalism (Marx), social events are meaningful and historically particular (Dilthey), modern society is marked by impersonal social institutions (Tönnies) .... Assumptions at this level guided the thinking of specific theorists as they developed conceptual schemes in terms of which to understand the social world and advanced theories about how the social world worked.

We should therefore not imagine that the social sciences developed as an abstract, logical solution to a simple problem, as perhaps naive empiricism might have suggested: identify the domain of social phenomena that constitute the declared subject matter of a given discipline of social science; examine and classify the phenomena so as to discover whatever regularities are to be found among them; formulate theoretical hypotheses about the laws that govern these phenomena; and explain the patterns and events that are discovered as the consequences of these hypothetical laws. Instead, each of the founders of the social sciences came to his or her studies with fairly specific pre-scientific ideas about what the domain of the social world was and how it should be explained. These ideas are both ontological and methodological; and all of them are contestable. Perhaps we might describe this framework as a “folk philosophy of knowledge” that is to some extent unexamined but that guides the pursuit of knowledge, the form that it takes, and the ways in which it is evaluated.

German intellectual historian Fritz Ringer tries to locate Max Weber's intellectual origins within what he calls an "intellectual field" -- as he puts it, "a constellation of positions that are meaningful only in relation to one another, a constellation further characterized by differences of power or authority, by the opposition between orthodoxy and heterodoxy, and by the role of the cultural preconscious, of tacit 'doxa' that are transmitted by inherited practices, institutions, and social relations"; Max Weber's Methodology: The Unification of the Cultural and Social Sciences

, p. 5. I think that Ringer is raising a question quite similar to mine here: what are the substantive reference points and conceptual presuppositions that the theorist brings to his theory and inquiry as he sets out. And this question is particularly crucial at the beginning; later theorists are in turn formed by their readings and reactions to the theories and systems of the prior generation.

Naturalism and positivism -- the idea that the social sciences ought to resemble the natural sciences, and the idea that the goal of science is the discovery of empirically supported lawlike generalizations -- constituted a powerful folk philosophy of science that was shared by Durkheim, Mill, and Comte. Given the power of the natural sciences in the nineteenth century, naturalism is unsurprising—even though it is profoundly misleading when applied to the social world. (See an earlier posting on non-naturalistic models of social science for more on the shortcomings of naturalism as a framework for social inquiry.)

But naturalism and positivism were not the only substantive philosophical frameworks that influenced the first generation of the social sciences. The hermeneutic tradition was a strikingly different starting point for the rigorous investigation and explanation of social realities. The hermeneutic tradition derived from literary and biblical interpretation; it looked at history and human affairs as a body of meaningful signs that required interpretation. And it emphasized the singular over the general, the historically particular over the law-like generalization. Dilthey's hermeneutic philosophy offered a non-positivist, non-causalist starting point for the "human sciences". The intellectual tradition that Dilthey absorbed and re-deployed as a basis for the human sciences was philosophically rigorous and committed to careful argumentation and interpretation. But it differed profoundly from the epistemology of empiricism and positivism.

The key point here should not be lost. It is that the various efforts to forge a scientific theory of society are partly empirical and theoretical; but they are also partly metaphysical and epistemic, grounded in pre-scientific assumptions about the nature of the social world and the nature of empirical study of society that are only partially expressed and are inherently debatable. Metaphors, pictures, hunches, and the thinker's own experiences play a deeply important role in the development of sociological frameworks. This is why it is appropriate to refer to the "sociological imagination." There are other starting points; and if we had started with different philosophical frameworks and different metaphors, we would have arrived at different sociologies. So engaging with the philosophy of social science is a fruitful way of trying to rethink the presuppositions of existing approaches to a "science of society".

could Derrida be described as coming from the Hermeneutic tradition?

No, I don't think that Derrida's philosophical perspective is a hermeneutic one; in fact, he seems to be anti-hermeneutic, in that he is skeptical about meanings behind texts.