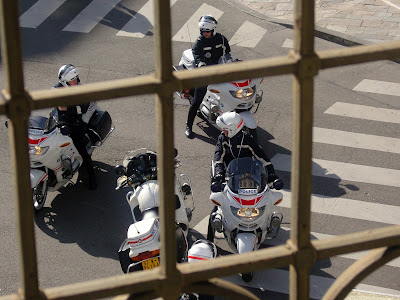 There is a pretty high level of social protest taking place in France today. Strikes and demonstrations are taking place in many cities, involving students, faculty, workers, and other ordinary people. (Here is a recent news roundup dated March 19, 2009, on strikes, demonstrations, and manifs in the past month or so, and here is a BBC report on a round of large strikes in January.) The demands largely have to do with the current economic crisis, unemployment, changes in the social security system, and proposed reforms to higher education. French people are demanding specific changes from the government, and the government does not seem to want to compromise.

These collective actions carry out a tradition of public protest in French political culture that goes back at least a century and a half (Charles Tilly, The Contentious French

). And few politicians in France will have overlooked the fact that public protests have sometimes developed into even more confrontational forms of collective action and conflict -- in 1968, for example, and in the banlieue in 2005. So the current round of protests and mass demonstrations has a significance in French political history that raises the possibility of even more intense civil conflict in the next twelve months.

What is to prevent the possibility that large organized demonstrations and strikes may develop into more violent conflicts between the population and the state in the future? How can the state ensure that large-scale peaceful protest -- a basic democratic right -- doesn't turn into episodic rioting and civil unrest when political stalemate emerges or when economic and social conditions worsen?

The question is a pressing one, because very large demonstrations and protests are volatile and unpredictable. When there are tens of thousands of participants and a range of leading organizations in a large demonstration, it is possible for the actions of the crowd to develop in ways that were not intended or anticipated. A peaceful march down a central boulevard can proceed from beginning to end with a great deal of internal discipline, with organizations maintaining ranks and preserving order. Many of the photos of manifs in French cities are distinguished by the prominent signs and banners the protesters carry announcing the organizations they represent -- labor unions, student organizations, faculty groups. And these banners themselves are an indication of organization and discipline. So large, peaceful protests can be organized and carried out successfully.

But the same march can also degenerate into skirmishing and street fighting involving small groups of activists and police. A small splinter group of violent protesters may break away from the march to engage in acts of violence against property -- burning cars, smashing shop windows. And these acts may spread by contagion to other parts of the crowd. Or a group of activists may deliberately confront the police with stones or bottles, with the goal of provoking violent reaction and an escalation of conflict. (This appears to have happened repeatedly in Athens a few months ago, and it was an anarchist tactic in the anti-globalization protests that took place in many cities a few years ago.) Or a group of police may engage in a demonstration of power intended to intimidate the crowd, leading to police violence against members of the crowd; again, this violence may spread to other locations. Even an unfortunate accident can lead to an outburst of violence -- a frightened driver losing control of his car and injuring a group of demonstrators, for example, can lead to panic and escalation. And any of these small outbreaks of violence can spread through the larger crowd, leading to an uncontrollable spasm of action and reaction.

So how can the authorities in a democracy develop strategies for ensuring that peaceful protests avoid violent escalation? I suppose the most direct strategy is to consider the demands themselves and evaluate whether they legitimately call for changes of policy that ought to be enacted. Compromise over the central issues leading to mass protest presumably has some effect on the likelihood of violence and disorder. If the people are convinced that the government is acting unjustly, the government ought to at least consider whether there is some legitimacy in these complaints.

A second strategy is more tactical. Recognizing that protest is likely to occur, it makes sense for the authorities to work with the organizers and their organizations to arrive at agreements about the scope and nature of the protest. The route, location, duration, and other conditions of the protest can be negotiated. And the authorities are well advised to attempt to gain the support of the organizers in an agreement to maintain internal discipline within the demonstration -- to win the agreement of the organizations themselves to attempt to suppress possible outbursts of violence by minority elements within the crowd.

A third strategy involves, of course, policing. The authorities have both the ability and the obligation to use police powers to ensure public order. And this means that they need to plan intelligently for the disposition and behavior of police forces to contain possible violent outbursts. But the use of police force is a delicate political art. Heavy-handed, intimidating policing seems to be as likely to provoke violence as to suppress it. Police behavior that depends upon the conspicuous threat of force likewise is likely to be provocative -- a double line of police with truncheons and riot gear, with face shields providing a disturbing anonymity, is likely to provoke fear and aggression in the crowd that it confronts. And, of course, police behavior that crosses the line to overt acts of brutality is almost certain to provoke violent response, as news of police violence spreads through the crowd. But it is also possible to err on the side of insufficient police presence; forces that can be quickly overwhelmed create the situation of a sudden escalation of violence by a crowd that has suddenly realized that there is no barrier to further violent actions.

It would seem that the ideal prescription for a policing strategy is something like this: enough police force in the vicinity to respond quickly and decisively to acts of violence by members of the crowd; positioning of police forces in fairly inconspicuous locations so their presence is not itself a provocation; and well-trained police forces who can be trusted to refrain from unnecessary violence against protesters. (The "police riot" in Chicago in 1968 plainly led to rapid escalation of violence in that situation.)

What makes this question so complicated is the fact that it involves social actions, conflicts, and relationships at many levels: the basic conflict between organized groups with explicit demands and the state with its interest in enforcing its policies; the limited degree of control that protest organizers have over the behavior of followers; the fact that smaller groups and organizations within the protest movement may have goals that are more radical than those of the main organizations; the fact that the authorities have only limited control over the forces at their command; and the fact that there may not be acceptable compromises that successfully resolve the conflict between protesters and the state. These factors make the behavior of the crowd somewhat unpredictable, and they introduce major sources of contingency into the way in which a particular day of protest and season of dissent play out.

Bringing the discussion back to France in 2009, there seem to be several large possibilities for the coming year. The government may decide that it needs to adjust some of its policies in order to reduce the level of popular dissent and unrest; it needs to reach a social compromise. The government may hold firm but the dissenting organizations may grow fatigued or discouraged -- so that the current round of protest and strikes subsides. Both sides may hold firm but an equilibrium level of protest and response may be reached, with neither side escalating to a higher level of civil conflict and violence. Or, finally, both the government and the protest movement may hold firm and protests may spiral upward into greater levels of social conflict, with riots and violent protests ensuing. More and more force may be exerted through police repression, and this may lead to more widespread and more aggressive demonstrations in the following weeks. And, of course, all of these scenarios are likely to have consequences for electoral outcomes in the coming several years.
Posted by Dan Little at 10:45 PM

It seems interesting to ask why large scale demonstrations are needed in France ( and in other democracies ). The answer is obvious: our democracy (and that in France) lacks regular channels for citizen to make their opinions heard. Yes, I can write to my elected representative or talk to her or him, but when the rep comes back to Congress, my opinion is not often attended to. That is why people with money spend large sums to hire lobbyists and, to be frank, bribe legislators.

The question confronting theorists of democracy is clearly: how to construct a democracy that is responsive to all citizens without either spending a lot of money or using a lot of energy to organize mass demonstrations.