Inequalities in France are particularly volatile these days, with high unemployment, rising income inequality, increasingly evident differences in opportunities for young people from immigrant communities, and rather different levels of schooling available to different communities in France. Social conflict, strikes, and political disagreements are rising in France, and it will take skillful work by community leaders and public policy makers to arrive at a new and sustainable social consensus. There seems to be a new social reality in France -- and to cope with these new realities, there is an urgent need for good social understanding of the causes of social distress, social inequality, and social conflict.

Some recent work in French sociology, economics, and journalism provides some useful contributions towards arriving at that better understanding of contemporary France.

Noteworthy along these lines is an important institute at the Sorbonne that focuses on inequalities in France, L'Observatoire des inégalités. Researchers affiliated with the Observatoire have recently published the institute's second report on inequalities, L’état des inégalités en France 2009 (link). The volume includes extensive statistical information about social and economic inequalities in France, as well as a set of short, thoughtful essays offering analysis of several dimensions of current inequalities. Observatoire Director Louis Maurin and President Patrick Savidan provide the introduction to the volume. The book is a solid and illuminating snapshot of the situation of wealth, income, education, gender, and ethnic status in France today, and it provides a useful empirical baseline for understanding current debates and conflicts in France during this period of severe economic crisis.

The major categories of measurement include income and poverty, employment, education, life style, social origin, gender, age, nationality and immigration, space and territory, health, housing, and comparisons with Europe and the world.

The book brings forward a great range of social data. Several graphs and charts caught my eye as being particularly interesting. Here's a map of poverty across the face of France: 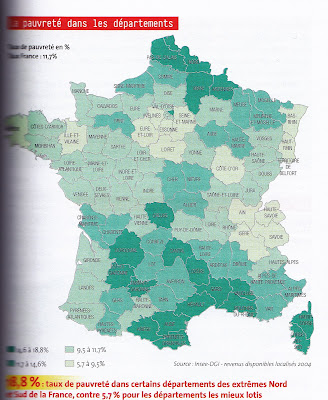 And here is a graph indicating the rate and volume of poverty over several decades. The second panel indicates a fairly large decline in the percentage of poverty since 1970, with relatively little change in the past ten years. 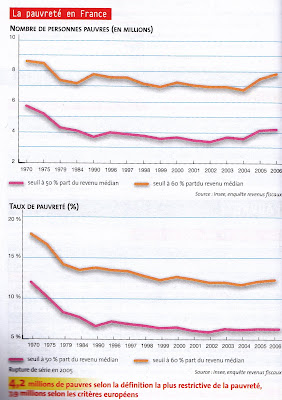 Women's equality in the workplace appears to have made more progress than in many other countries. Since 1951 median female salary has increased from about 65% of median male salary to about 82% in 2005: 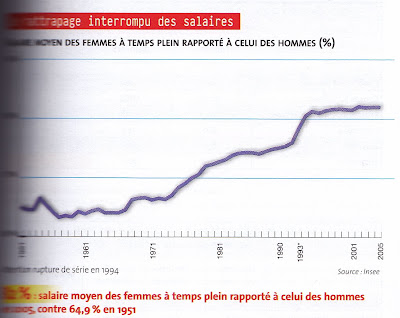 And the percentage of adults with higher education is also an interesting variable. Overall, 17.7% of adults have a two-year or four-year degree beyond the Baccalaureat (roughly, high school diploma). This compares to a U.S. figure of about 27% of the adult population with an bachelor's degree (link), with an additional percentage of adults with a two-year associate's degree. This is especially important because another table documents that 72% of young people with the Bac+2 have regular jobs, compared with only 43% of young people lacking a diploma. Clearly, access to higher education is a critical component in economic opportunity in France, as it is in the United States. 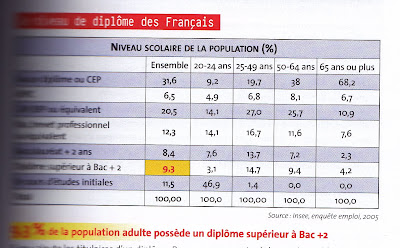 The section on health is interesting, though it would be useful to have more public health variables and more disaggregation across regions and communities. In the fifteen years between 1976 and 1991 life expectancy for both men and women has increased by about three years, and the gap between male and female life expectancy has remained wide at about seven years (76 compared to 83 for the period 1991-1999). In general, this volume indicates that French public opinion and public policy seems to pay more attention to the situation of "handicapped" people than is the case in the United States.

The section on nationalities and immigrants is also eye-opening. 15% of immigrant households fall below the poverty line, compared with 5.6% of non-immigrant households. And households of North African origin show a staggering poverty rate of 22.6%. The report makes it plain that a significant part of this differential derives from overt discrimination; a candidate with a French surname is between 1.5 and 3 times more likely to receive a job interview than a French resident of Moroccan origin.

An excellent companion to this book is La France invisible, prepared by Stéphane Beaud, Joseph Confavreux, and Jade Lindgaard. (See an earlier posting on French sociology for a brief discussion of this book.) This book makes an extensive effort to catalogue the many slices of French society that are often overlooked; this is the sociological reality that underlies many of the forms of inequality described in L’état des inégalités en France 2009. La France invisible is not primarily interested in statistical measurement; there is not a single table or graph in the 650-page volume. Instead, it is an effort at sociological description and ethnographic insight into the situations of daily life of the various disadvantaged minority groups in France. The editors link their work to an earlier book by Pierre Bourdieu, La Misere du monde, in 1993. Their goal is to give voice to people and groups who have been largely unheard in the larger society in the past thirty years. And they have made a very powerful contribution to this effort.

Combine these books with the careful and intense fieldwork by Didier Lapeyronnie in Ghetto urbain, and you have a great survey of social inequalities in France today. (See an earlier posting on segregation in France that refers to Lapeyronnie's work.) Lapeyronnie's work documents in great sociological detail, some of the social realities that define the situation of inequality, discrimination, and segregation that limit many of France's immigrant communities today. And it is self-evident, that France must address these issues in ways consistent with its highest civic values -- or social conflict is inevitable.

I am sure that every country is developing its own forms of analysis of the new social realities that the twenty-first century confronts us with. And it is an interesting fact that there are persistent differences across national traditions of social inquiry. We certainly need new approaches and new mental frameworks in terms of which to understand the rapidly changing social circumstances of the cities and populations of the world today. Berlin, Oslo, and Milan are probably creating equally interesting new ideas about how to conceptualize emerging social realities. But even in this global world of ideas, the obstacle of language makes transmission of these research traditions difficult. The contemporary French sociological framework is sufficiently distinctive from American and British sociology to serve as a highly interesting point of contrast and innovation for fresh thinking everywhere.