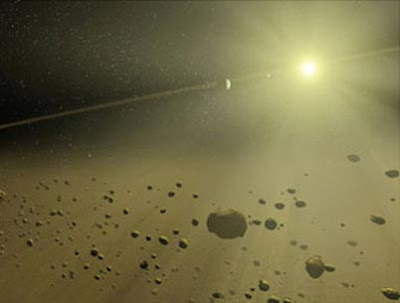 , Conjectures and Refutations: The Growth of Scientific Knowledge

). (Stephen Thornton has a very nice essay on Popper's philosophy in the Stanford Encyclopedia of Philosophy.) In its essence, this theory is an alternative to "confirmation theory." Contrary to positivist philosophy of science, Popper doesn't think that scientific theories can be confirmed by more and more positive empirical evidence. Instead, he argues that the logic of scientific research is a critical method in which scientists do their best to "falsify" their hypotheses and theories. And we are rationally justified in accepting theories that have been severely tested through an effort to show they are false -- rather than accepting theories for which we have accumulated a body of corroborative evidence. Basically, he argues that scientists are in the business of asking this question: what is the most unlikely consequence of this hypothesis? How can I find evidence in nature that would demonstrate that the hypothesis is false? Popper criticizes theorists like Marx and Freud who attempt to accumulate evidence that corroborates their theories (historical materialism, ego transference) and praises theorists like Einstein who honestly confront the unlikely consequences their theories appear to have (perihelion of Mercury).

At bottom, I think many philosophers of science have drawn their own conclusions about both falsifiability and confirmation theory: there is no recipe for measuring the empirical credibility of a given scientific theory, and there is no codifiable "inductive logic" that might replace the forms of empirical reasoning that we find throughout the history of science. Instead, we need to look in greater detail at the epistemic practices of real research communities in order to see the nuanced forms of empirical reasoning that are brought forward for the evaluation of scientific theories. Popper's student, Imre Lakatos, makes one effort at this (Methodology of Scientific Research Programmes; Criticism and the Growth of Knowledge

); so does William Newton-Smith (The Rationality of Science

), and much of the philosophy of science that has proceeded under the rubrics of philosophy of physics, biology, or economics is equally attentive to the specific epistemic practices of real working scientific traditions. So "falsifiability" doesn't seem to have a lot to add to a theory of scientific rationality at this point in the philosophy of science. In particular, Popper's grand critique of Marx's social science on the grounds that it is "unfalsifiable" just seems to miss the point; surely Marx, Durkheim, Weber, Simmel, or Tocqueville have important social science insights that can't be refuted by deriding them as "unfalsifiable". And Popper's impatience with Marxism makes one doubt his objectivity as a sympathetic reader of Marx's work.

Of greater interest is another celebrated idea that Popper put forward, his critique of “historicism” in The Poverty of Historicism

(1957). And unlike the theory of falsifiability, I think that there are important insights in this discussion that are even more useful today than they were in 1957, when it comes to conceptualizing the nature of the social sciences. So people who are a little dismissive of Popper may find that there are novelties here that they will find interesting.

Popper characterizes historicism as “an approach to the social sciences which assumes that historical prediction is their principal aim, and which assumes that this aim is attainable by discovering the ‘rhythms’ or the ‘patterns’, the ‘laws’ or the ‘trends’ that underlie the evolution of history” (3). Historicists differ from naturalists, however, in that they believe that the laws that govern history are themselves historically changeable. So a given historical epoch has its own laws and generalizations – unlike the laws of nature that are uniform across time and space. So historicism involves combining two ideas: prediction of historical change based on a formulation of general laws or patterns; and a recognition that historical laws and patterns are themselves variable over time, in reaction to human agency.

Popper’s central conclusion is that large predictions of historical or social outcomes are inherently unjustifiable -- a position taken up several times here (post, post). He finds that “holistic” or “utopian” historical predictions depend upon assumptions that simply cannot be justified; instead, he prefers “piecemeal” predictions and interventions (21). What Popper calls “historicism” amounts to the aspiration that there should be a comprehensive science of society that permits prediction of whole future states of the social system, and also supports re-engineering of the social system if we choose. In other words, historicism in his description sounds quite a bit like social physics: the aspiration of finding a theory that describes and predicts the total state of society.

The kind of history with which historicists wish to identify sociology looks not only backwards to the past but also forwards to the future. It is the study of the operative forces and, above all, of the laws of social development. (45)

Popper rejects the feasibility or appropriateness of this vision of social knowledge, and he is right to do so. The social world is not amenable to this kind of general theoretical representation.

The social thinker who serves as Popper’s example of this kind of holistic social theory is Karl Marx. According to Popper, Marx’s Capital (Marx 1977 [1867]) is intended to be a general theory of capitalist society, providing a basis for predicting its future and its specific internal changes over time. And Marx’s theory of historical materialism (“History is a history of class conflict,” “History is the unfolding of the contradictions between the forces and relations of production”; (Communist Manifesto, Preface to a Contribution to Political Economy)) is Popper’s central example of a holistic theory of history. And it is Marx’s theory of revolution that provides a central example for Popper under the category of utopian social engineering. In The Scientific Marx

I argue that Popper’s representation of Marx’s social science contribution is flawed; rather, Marx's ideas about capitalism take the form of an eclectic combination of sociology, economic theory, historical description, and institutional analysis. It is also true, however, that Marx writes in Capital that he is looking to identify the laws of motion of the capitalist mode of production.

Whatever the accuracy of Popper's interpretation of Marx, his more general point is certainly correct. Sociology and economics cannot provide us with general theories that permit the prediction of large historical change. Popper’s critique of historicism, then, can be rephrased as a compelling critique of the model of the natural sciences as a meta-theory for the social and historical sciences. History and society are not law-governed systems for which we might eventually hope to find exact and comprehensive theories. Instead, they are the heterogeneous, plastic, and contingent compound of actions, structures, causal mechanisms, and conjunctures that elude systematization and prediction. And this conclusion brings us back to the centrality of agent-centered explanations of historical outcomes.

I chose the planetary photo above because it raises a number of complexities about theoretical systems, comprehensive models, and prediction that need sorting out. Popper observes that metaphors from astronomy have had a great deal of sway with historicists: "Modern historicists have been greatly impressed by the success of Newtonian theory, and especially by its power of forecasting the position of the planets a long time ahead" (36). The photo is of a distant planetary system in the making. The amount of debris in orbit makes it clear that it would be impossible to model and predict the behavior of this system over time; this is an n-body gravitational problem that even Newton despaired to solve. What physics does succeed in doing is identifying the processes and forces that are relevant to the evolution of this system over time -- without being able to predict its course in even gross form. This is a good example of a complex, chaotic system where prediction is impossible.
Posted by Dan Little at 10:05 AM

Don't you mean the "perihelion of Mercury"?

Q, thanks; of course you're right. Correction noted!

Reliable predictions can still be made about n-body systems through the use of simulation-- without solving the n-body system. Climate modeling is effective without "solving" the climate system in some closed-form equation.

In fact, n-body systems are simulated in video games all the time.

Haven't read the work itself yet, but is it possible that Popper's characterization of the philosophy of historical materialism is colored by Lenin's attempts to predict the course of revolution through the advanced countries in Europe? There's a dramatic irony in reading his predictions in State and Revolution; certainly there may have been some wishful thinking involved. But of course making predictions is a necessary task for any leader, you can't really fault him for that, nor characterize an entire methodology based on a few instances of malapplication.
I suppose an interesting question might be what the difference is between applying a theory in a written assay versus enacting it in political praxis.
Apologies if this is incoherent and meandering; I am but a sleepy undergrad, writing extempore.