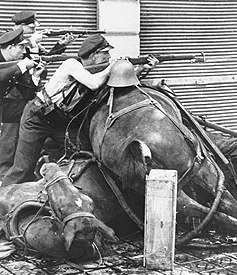 What are the intellectual tasks that define the historian's work? In a sense, this question is best answered on the basis of a careful reading of some good historians. But it will be useful to offer several simple answers to this foundational question as a sort of conceptual map of the nature of historical knowing.

First, historians are interested in providing conceptualizations and factual descriptions of events and circumstances in the past. This effort is an answer to questions like these: “What happened? What was it like? What were some of the circumstances and happenings that took place during this period in the past?” Sometimes this means simply reconstructing a complicated story from scattered historical sources – for example, in constructing a narrative of the Spanish Civil War or attempting to sort out the series of events that culminated in the Detroit race riot / uprising of 1967. But sometimes it means engaging in substantial conceptual work in order to arrive at a vocabulary in terms of which to characterize “what happened.” Concerning the disorders of 1967 in Detroit: was this a riot or an uprising? How did participants and contemporaries think about it?

Second, historians often want to answer “why” questions: “Why did this event occur? What were the conditions and forces that brought it about?” This body of questions invites the historian to provide an explanation of the event or pattern he or she describes: the rise of fascism in Spain, the collapse of the Ottoman Empire, the great global financial crisis of 2008. And providing an explanation requires, most basically, an account of the causal mechanisms, background circumstances, and human choices that brought the outcome about. We explain an historical outcome when we identify the social causes, forces, and actions that brought it about, or made it more likely.

Third, and related to the previous point, historians are sometimes interested in answering a “how” question: “How did this outcome come to pass? What were the processes through which the outcome occurred?” How did the Prussian Army succeed in defeating the superior French Army in 1870? How did Truman manage to defeat Dewey in the 1948 US election? Here the pragmatic interest of the historian’s account derives from the antecedent unlikelihood of the event in question: how was this outcome possible? This too is an explanation; but it is an answer to a “how possible” question rather than a “why necessary” question.

Fourth, often historians are interested in piecing together the human meanings and intentions that underlie a given complex series of historical actions. They want to help the reader make sense of the historical events and actions, in terms of the thoughts, motives, and states of mind of the participants. For example: Why did Napoleon III carelessly provoke Prussia into war in 1870 (David Baguley, Napoleon III and His Regime: An Extravaganza

)? Why has the Burmese junta dictatorship been so intransigent in its treatment of democracy activist Aung San Suu Kyi (Nicholas Farrelly, Burma's General Objectives)? Why did northern cities in the United States develop such profound patterns of racial segregation after World War II (Thomas Sugrue, The Origins of the Urban Crisis: Race and Inequality in Postwar Detroit

)? Why did young men in the 1910s and 1920s prefer dangerous, noisy internal combustion automobiles to safe, quiet electric vehicles (Gijs Moms, The Electric Vehicle: Technology and Expectations in the Automobile Age)? Answers to questions like these require interpretation of actions, meanings, and intentions – of individual actors and of cultures that characterize whole populations. This aspect of historical thinking is “hermeneutic,” interpretive, and ethnographic.

And, of course, the historian faces an even more basic intellectual task: that of discovering and making sense of the archival information that exists about a given event or time in the past. Historical data do not speak for themselves; archives are incomplete, ambiguous, contradictory, and confusing. The historian needs to interpret individual pieces of evidence; and he/she needs to be able to somehow fit the mass of evidence into a coherent and truthful story. So complex events like the Spanish Civil War present the historian with an ocean of historical traces in repositories and archives all over the world; these collections sometimes reflect specific efforts at concealment by the powerful (for example, Franco's efforts to conceal all evidence of mass killings of Republicans after the end of fighting); and the historian's task is to find ways of using this body of evidence to discern some of the truth about the past.

The photo above gives a small glimpse of the challenges the historian faces. In order to interpret the photo as "a moment in the Spanish Civil War", the historian needs to provide a careful interpretation of its provenance and content. Who are these soldiers? Where is the fighting taking place? Was the photo staged? What, if anything, does it tell us about the social conflicts and military circumstances of the Civil War? How can it help the reader of history to come to a better understanding of the experience of civil war?

In short, historians conceptualize, describe, contextualize, explain, and interpret events and circumstances of the past. They sketch out ways of representing the complex activities and events of the past; they explain and interpret significant outcomes; and they base their findings on evidence in the present that bears upon facts about the past. Their accounts need to be grounded on the evidence of the available historical record; and their explanations and interpretations require that the historian arrive at hypotheses about social causes and cultural meanings. Historians can turn to the best available theories in the social and behavioral sciences to arrive at theories about causal mechanisms and human behavior; so historical statements depend ultimately upon factual inquiry and theoretical reasoning. Ultimately, the historian's task is to shed light on the what, why, and how of the past, based on inferences from the evidence of the present.
Posted by Dan Little at 7:15 AM