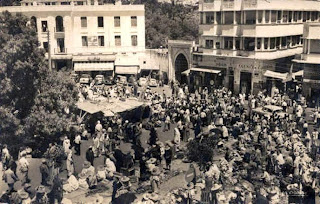 An earlier post asked what sorts of social entities exist. Posing the question this way leads us to think of persistent abstract things populating the social world -- for example, structures, organizations, or institutions. But as a commentator to the earlier post pointed out, there are persistent phenomena in the social world that don't look much like things and look more like activities and processes. Grammatically they have more in common with verbs than nouns. And when many such social phenomena are described using nouns, we are often forced to interpret them in a non-referential way.

Take the social realities of friendship, solidarity, and inflation.

The first is a characteristic of social relationships; it is a relational concept.  It doesn't make sense to think of "friendship" as a concatenation of monadic atoms of "friend units"; rather, the concept of friend evinces a set of relational characteristics between persons.  So "friendship" doesn't designate a continuing "thing" in the world; instead, it designates a complex relational and psychological feature of pairs of persons, widely separated across population and space.  Our theory of friendship encapsulates our interpretation of the mental and behavioral states of persons who are in the relationship of friendship with each other.

Solidarity has this feature of relationality, and it adds a feature of social motivation and psychological orientation to a group. We can ask whether solidarity exists in the social world, and we can reasonably answer that it does.  But when we affirm that "solidarity exists", we really mean that "there are numerous instances of groups and individuals in which members of the group willingly conform their behavior to the needs and purposes of the group."  Our explanation of "solidarity" is likely to invoke abstract ideas about individuals within consciously constituted groups rather than something analogous to a social substance.  So solidarity is not a thing, but rather a dynamic feature of consciousness shared in varying ways by individuals who orient themselves to a group.

"Inflation" is a different sort of social noun. It refers to a complex social state of affairs reflecting a set of processes in which prices of goods are determined by market forces and prices are rising across a range of commodities. We cannot define the social reality of "inflation" without specifying a set of distributed social facts and identifying a number of social processes.  So inflation too doesn't look at all like a social thing.

Each of these social nouns corresponds to a social reality. But this reality doesn't look much like a set of fixed entities or composites of entities. The semantics of objects and things doesn't work well for this range of social vocabulary. And yet each of these terms identifies a domain that is perfectly well suited to empirical inquiry and discovery. The social reality of friendship practices differs across cultures; friendship practice has some degree of stability over time; and we can discover quite a bit about the culture, norms, and practices of friendship in a particular culture.  And likewise with solidarity and inflation.  Each is a legitimate object of empirical inquiry; and neither conforms to the ontology of "thing" with fixed location and properties.

What this discussion suggests is that our ontology of the social world needs to encompass not only a range and variety of entities -- structures, institutions, organizations, but also ontological categories that reflect a more fluid set of social realities: processes, practices, rules, relations, and activities.  This observation converges with the styles of thought of thinkers as various as Charles Tilly and Norbert Elias; Tilly refers to "relational realism," and Elias is an advocate of "process sociology".
Posted by Dan Little at 2:57 PM

A reference should also be made to Pierre Bourdieu's work in this context.
Greetings from a new reader in the Middle East!