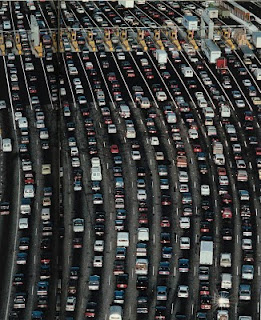 Earlier posts have raised the possibility that Michigan's jobs crisis will lead to significant population loss (link, link, link).  The basic idea is this: Michigan has lost more than 800,000 jobs since 2002.  Its population in 2002 was about 10 million.  The current unemployment rate in the state is about 15%, or just under.  In order to bring the unemployment rate back to the 2002 levels (~6%), roughly 800,000 jobs need to be created; or else the working population needs to decline by about that much.  Assuming one dependent for each worker, that amounts to a loss of about 1.6 million people.  Other combinations are possible; create 400,000 jobs and only 800,000 Michigan residents would leave; etc.

So what is the situation of out-migration today?  Here are some recent reports over the past twelve months:
And where are Detroit metro families going?  Here is a map Forbes published (link) showing the destinations in 2008: 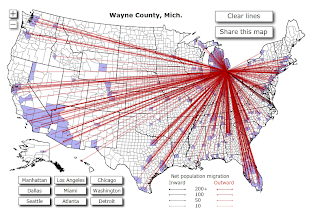 Notice that almost all the lines are red, indicating out-migration.  Compare that with the pattern of migration for Seattle: 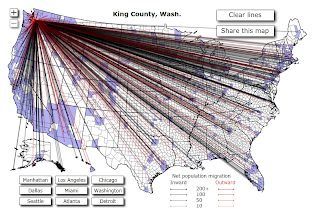 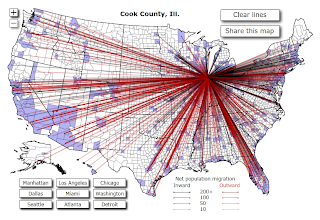 In other words, a significant amount of out-migration has already occurred in Michigan, and there is no indication that this process will slow down.

In fact, some observers have argued that Michigan's population losses have been less than expected in the past 18 months because of the generally bad economic conditions in other parts of the country (and because of the difficulty of selling a house).  But if this is a factor, then we should expect an increase in out-migration when job creation takes hold in other parts of the country.

There is another worrisome part of this story: the fact that the best-educated and most talented people are likely to be the first to go.  They are nationally competitive with skills that can bring value to employers in other parts of the country; so population loss is likely enough to be talent-drain as well.

It is hard to find any political or business leader in the state of Michigan who believes that it is possible to create 100,000 new jobs a year in the state over a prolonged period.  This seems to imply chronic high unemployment in the state for a very long time, with all the features of poverty, poor health, and low quality of life that comes along with this scenario.

So is there a different possible future for Michigan that assumes a different paradigm: a smaller population; smaller cities; but a more robust and diverse economy and a higher overall standard of living?  Is it time, perhaps, to be planning for a smaller but more prosperous and healthy state?

There are many serious challenges that this transformation would create.  A declining population implies a declining tax base; so state and municipal revenues would decline as well.  School systems were built for a certain level of capacity; take 15-25% of the children out of a school system and you have a funding crisis in the schools as well.  Detroit's Mayor Dave Bing is grappling with the need to consolidate the land area of the population served by the city of Detroit, in order to achieve a balance between resources and needs.  And, of course, the state would continue to lose representation in the House of Representatives.  So designing a strategy for "smaller, healthier, wealthier" is not simple.  But it may be time to begin thinking along these lines.

The results of the 2010 census are now available, and Michigan is the only state in the country to have lost population since 2000.  The country as a whole gained 9.6%, whereas Michigan lost .6% of its population -- roughly 60,000 people.  Here is a news article from AP (link).
Posted by Dan Little at 10:58 PM

As a recent newcomer (last august) to michigan i find ur analysis troubling to say the least.

perhaps the fact that michigan has developed around the petroleum consuming/pollution spewing automobile as opposed to public transit and walkability/bikeability makes it less appealing in today's cultural climate, no pun intended.

coming from Oregon, all i can say is i can't wait to move back

Michigan's early development was based on water transportation which could be restarted if we start using more bulk carriers. The original canal routes that went from the Hudson River in New York to connect up with the Mississippi River basin were amazing.

Of course I live in the Raleigh-Durham area and our river navigation would consist of kayaking (with only a little portage) to the ocean.