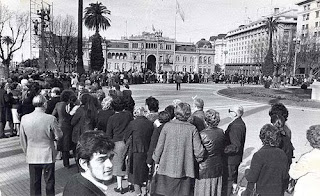 When does a society need a process of "truth and reconciliation" along the lines of such processes in South Africa, El Salvador, and Argentina?  Here are some recent examples of truth and reconciliation processes:  the fate of the "disappeared" in Argentina (link); Indian Residential Schools in Canada (link); Korean War civilian casualties (link); Liberian civil conflict (link); lynchings in the US South (link); and, of course, the Truth and Reconciliation Commission in South Africa (link).

The general theory of TRC is that a society is sometimes grievously divided over events and crimes that have occurred in the past, and that honest recognition of those crimes may lay a foundation for reconciliation within the society. Here is a summary statement of the purpose of a Truth and Reconciliation Commission from the South African Ministry of Justice:


... a commission is a necessary exercise to enable South Africans to come to terms with their past on a morally accepted basis and to advance the cause of reconciliation.

But what more can we say about what facts might trigger the need for a TRC process?

First, such a process is only invoked when there is a serious history of injustice within the community, leading to a situation in which one group has been badly treated by other groups or powerful institutions.  The stakes need to be high for current members of society in order to justify establishing a TRC.

Second, a TRC process seems to be most needed when the consequences of the past injustice persist into the present: the bad things that happened in the past continue to burden some groups in the present.

Third, there is an implication of abiding resentment and rancor within the current population. The injustice of the past continues to be a source of emotional division between members of the relevant groups. This is the reconciliation part of the agenda: by honestly confronting the facts about the past injustices, the groups subject to this treatment may be in a better place to resolve their rancor. And more practically, honest recognition of the past may lead to concrete steps in the present to restore the interests and rights of affected groups.

Fourth, there is a common feature of violence and subjugation in the instances where TRC processes have been invoked to date: pogroms, mass killings, lynchings, and other forms of inter-group violence.

So what are some important examples of historical circumstances where TRC is called for? There are many:
Here is the immediate question of interest in this posting: how do the facts of northern race relations fit into the parameters of truth and reconciliation?  In the Detroit area the Michigan Roundtable for Diversity and Inclusion is calling for a Truth and Reconciliation Commission to honestly examine the history of race and residence in the region (link).  The Roundtable states that --


The establishment of a Truth and Reconciliation Commission, inspired by the process that took place in South Africa, will allow us to develop an appropriate understanding of past injustices and to envision constructive remedies to create a new regional culture of fairness, equal opportunity and prosperity.

(Here is a link to the Facebook page for the organization in which the initiative is launched.)

So let's ask the crucial question: are the patterns of racial segregation and inequality of opportunity that are unmistakably involved in most US large cities an appropriate cause for a process of truth and reconciliation?

In many ways the answer appears to be "yes." Urban segregation was and is a source of massive injustice for black Americans.  It embodied a quasi-permanent pattern of inequality of opportunity and outcome on African-American citizens.  It was the result of specific but often hidden social practices that embodied a pattern of white privilege.  And these practices sometimes involved actual and threatened violence.  So entrenched discrimination and segregation constitute social harms that meet most of the criteria mentioned above, and the truth about the underlying mechanisms is not widely known.

In short, most honest observers would probably agree that the history of racial segregation in Southeast Michigan reflects serious injustice and continues to inflict harms on people in the region today.  These harms include disproportionate levels of poverty, unemployment, inadequate education, and differential health outcomes.  And many would agree as well that social injustices of this magnitude need to be addressed openly and honestly.

The map of the Detroit metropolitan area below represents a measure of "neighborhood opportunity" across the region.  It is published in an important report, "Opportunity for All," by john a. powell and the Kirwan Institute for the Study of Race and Ethnicity at Ohio State University (link).  What it documents in a very visual way is the current effects of past and present practices of residential segregation: the areas of high African-American population line up very precisely with the areas of low "neighborhood opportunity".  (Here is a keynote address by john a. powell to the Michigan Roundtable for Diversity and Inclusion (link) that lays out the data in great detail.) 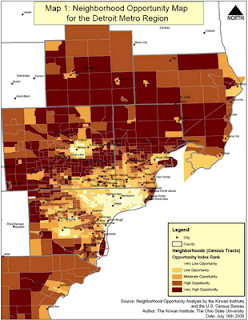 So a sustained and honest effort to uncover and disseminate the historical causes of these patterns of racial segregation in the region is a positive step forward.

What is perhaps more difficult to answer is the question of efficacy.  Do these TRC processes actually work?  Do they succeed in changing attitudes in the populations in which they operate?  Do they help communities develop more harmonious and collaborative approaches to the problems they face?  And does "truth" lead to "reconciliation" in a significant number of cases?  The Michigan Roundtable conducted a survey of racial attitudes in Michigan in 2009, and one question in particular stands out.  In 2009 56% of residents said that we will have racial equality "in 100 years" or "never," compared to 48% in 2008.  In other words, well over half of all Michigan citizens despair of achieving racial equality within five generations.  And 68% of African American citizens in Michigan expressed the same lack of hope.  We need to do better than this at achieving real racial equality; the question is, whether the proposed Truth and Reconciliation Commission can help us move forward in practical and effective ways.
Posted by Dan Little at 2:54 PM

Hi there Are you aware of the evolution of the south African political scenario where the situation has resulted in the creation of : TRPSA aka The Truth and Reconciliation Party of South Africa


Please read more at: http://truthandreconciliationpartyofrsa.blogspot.com/ and

I'm quite cynical about most of these truth and reconciliation commissions, so I think one important thing to note is the role that international forces play in these commissions, their reports, and the ways in which those reports are enacted into law.

The example of El Salvador is particularly pertinent here, because this is a nation whose government was under the thumb of the United States and its foreign policy during the war/death squad years (1980-1992, roughly). The truth commission contained an American (Thomas Buergenthal), and the commission's report resulted in a blanket amnesty for war criminals.

What would be really helpful would be some way to distinguish a legitimate, serious commission from a farce.

Hello, last week we announced the formation of the United States Truth and Reconciliation Coalition (US TRC), based on the South Africa TRC. As a coalition, we will focus on increasing public awareness of extreme abuse - historical and present-day - that has been committed in the United States and/or by the United States government. We will focus on the following: US government human experimentation, human trafficking, organized ritual crime, and torture. To learn more, you can contact us at ustrc@comcast.net Thank you. Kathleen A. Sullivan, MSW