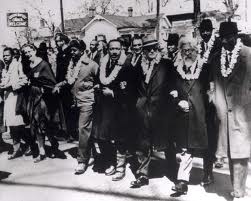 Today the country celebrates the birthday of Dr. Martin Luther King, Jr. Most of us think of Dr. King as a genuinely important American thinker, and one whose life and actions permanently changed some important values and thought processes in this country when it came to racial equality and affirming communities in the United States. His death by assassination at the age of 39 cut short a life of influence from which our country could have benefited greatly in the intervening decades.

How much have we changed in our thinking about race since 1968?  Is it possible to assess the degree of influence that Dr. King has had on current American attitudes about race and about what needs to be done?  How would we assess the nature and depth of changes that have occurred in American attitudes towards race, equality, and community since 1968? What were some of the mechanisms of value transmission through which those changes took place? And how would we attempt to sort out the elements of those changes that can be traced back to Dr. King?

One part of the mechanism of influence is pretty obvious. Dr. King was a visible and influential leader from the Montgomery bus boycott in 1955 to the month of his assassination in Memphis in 1968. He gave hundreds of speeches, he had a meaningful and visible footprint on television and radio, and he reached a mass audience during those years. White and black Americans probably heard his messages differently, but there is no doubt that King influenced millions of Americans during his lifetime.  So this is a very direct form of influence -- people who were exposed to the struggles of the Civil Rights era and to the speeches and actions of Dr. King, and who absorbed a new set of attitudes about racial equality and social progress from those experiences.

It is an interesting and difficult question to assess how much of that direct first-person influence persisted into the next generation of children and adults.  But here again, mechanisms of transmission are easy enough to identify.  Many of those persons who were directly influenced during the Civil Rights generation had children of their own, whom they influenced through their example and their speech, and a certain number of them became teachers and broadcasters and health care providers -- each creating his/her own avenue of influence on others.  So the primary contemporary effects of Dr. King's teachings and actions had a second- and third-generation echo.

Another form of influence during his lifetime was more focused. Dr. King was an elite civil rights leader and strategist, and he stood in a central position within networks of activists and leaders, both black and white. He was successful in positioning his own rhetoric and strategies in nodes of influence within these networks and organizations. His own views didn't always prevail -- but they did often enough to permanently influence debates about racial justice and strategy within the next generation of influencers. So King's philosophy and vision found vivid expression by the next generation of leaders and influencers both nationally and regionally. And these leaders in turn influenced future debates and many millions of people through their own political actions and leadership.

A third mechanism of influence stems from historical tragedy -- the assassination itself.  The traumatic impact on American consciousness of King's assassination surely had an impact on the degree to which his philosophy and vision penetrated the American psyche. It was a visceral warning for all of America about the virulence and violence of racial hatred. It served as an unforgettable signal that these conflicts must be resolved and that we must find ways of ending American racism. And Dr. King's message was a promising one: we can be better than this, we can move beyond slavery and discrimination to a world of equal love and respect.


All these pathways of influence contributed to other large changes as well, including especially the effort to broaden school curricula to include issues of race and racial equality.  Those curricular innovations were certainly influenced by Dr. King's example; and millions of American children from the 1970s through the present were exposed to positive ideas about equality and the value of diversity in language that had very much in common with Dr. King's vision of the future.  So it is reasonable to expect that young people's attitudes towards race in the 1970s through 1990s were very different from those of children educated in the 1940s and 1950s.
So how much change has there been in fundamental attitudes since 1954 (the year of the Supreme Court school desegregation decision, Brown v. Board of Education)? And how much of MLK's stamp do current American attitudes bear?  Howard Schuman and other scholars have attempted to investigate this question empirically (Racial Attitudes in America: Trends and Interpretations, Revised Edition

).  Schuman and his colleagues work carefully through the main political events of the 1940s through 1960s, and attempt to synthesize public opinion data to assess the changes that occurred within the population over a fifty-year period.
It certainly appears that American attitudes towards race, and towards a racially just society, have changed dramatically since the 1950s.  The Civil Rights struggle itself -- the struggle by African-American men and women to overcome systematic discrimination and racism -- is surely the largest part of this change.  And there certainly were other visions and voices among civil rights leaders who helped to shape the debate.  But Dr. Martin Luther King, Jr.'s voice seems to have had the most pervasive and enduring impact on mainstream America when it comes to racial justice and an inclusive community.  Dr. King offered a unique combination of realism and optimism that seems to have worked very well with other deep American values.  Here is some realism, from "A Testament of Hope" included in A Testament of Hope: The Essential Writings and Speeches of Martin Luther King, Jr.

Whenever I am asked my opinion of the current state of the civil rights movement, I am forced to pause; it is not easy to describe a crisis so profound that it has caused the most powerful nation in the world to stagger in confusion and bewilderment.  Today's problems are so acute because the tragic evasions and defaults of several centuries have accumulated to disaster proportions. (313)

And here is some of his finest optimism, concluding the same essay:

A voice out of Bethlehem two thousand years ago said that all men are equal.  It said right would triumph.  Jesus of Nazareth wrote no books; he owned no property to endow him with influence.  He had no friends in the courts of the powerful.  But he changed the course of mankind with only the poor and the despised.  Naive and unsophisticated though we may be, the poor and despised of the twentieth century will revolutionize this era.  In our "arrogance, lawlessness and ingratitude," we will fight for human justice, brotherhood, secure peace and abundance for all.  When we have won these -- in a spirit of unshakable nonviolence -- then, in luminous splendor, the Christian era will truly begin. (328)