New ideas about taxes in France

The structure of the tax code in France is getting new attention these days. President Sarkozy has made fiscal reform a key issue in the run-up to the presidential elections in 2012. The Nouvel Obs has a very good section this week on a recent book by Camille Landais, Thomas Piketty, and Emmanuel Saez, economists with long expert knowledge of the French fiscal system. The book is Pour une révolution fiscale: Un impôt sur le revenu pour le XXIe siècle, and it offers a stringent critique of the existing system and a set of proposals for a reformed system. The book has a companion website here.

In a word, these experts conclude that the existing tax structure in France is seriously unjust because it is anti-progressive at the very high end of the income distribution -- the top 1 percent decline steeply in the percentage of their income that is collected in the form of the several tax vehicles.  Only 20% of the state' revenues derive from taxes that are truly progressive (Nouvel Obs, 2411, p. 18). 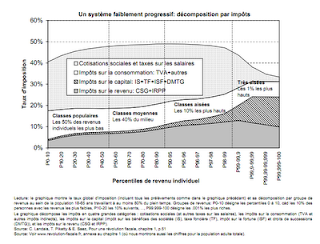 As we can see from the graph, the total tax burden of the top 1 percent of income earners declines sharply from 48% to about 32%. And the reason for this is the portion of the French tax system devoted to funding social services (Cotisations sociales et taxes sur les salaires). This assessment is roughly flat from the 30th percentile to the 99th percentile, and then it declines rapidly. (The other components of taxes represented here include the income tax, a tax on returns on capital, and taxes on consumption including the TVA.)
Here is what the distribution of tax burdens would look like on the basis of their proposals: 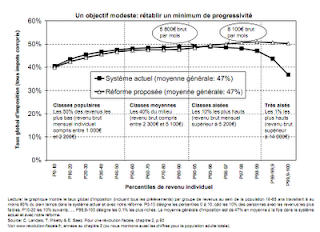 Also of interest are the summary graphs that the authors provide of the distribution of income and wealth in France: 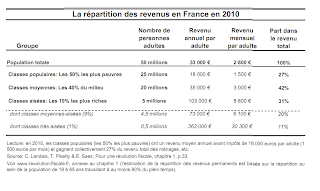 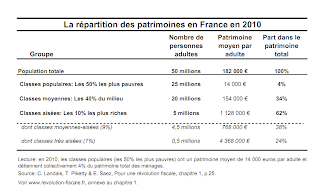 Two things are particularly striking in this discussion. One is how significantly different the French fiscal system is from the U.S. system. Income tax is less than 10% of income for all income levels. And the cotisation is a substantially larger share of total taxes than the Social Security tax in the U.S.

But the other striking thing is the significantly different perspective that these authors take on taxes, compared to almost all discussions of taxes in the U.S. They are fundamentally concerned about the fairness of the tax burden; they care about progressivity; and they are concerned to prevent the ability of "les tres aisées" to exercise political influence in order to reduce their share. "Fiscal rigor" doesn't mean severe budget reductions and elimination of the social security net for French citizens; it means creating a tax system that is adequate to the spending commitments of the French state, and that is fair in its distribution of tax obligations across the whole of society.

I think most observers of French politics doubt that this kind of progressive and sweeping fiscal reform is in the cards in the coming decade. But it is at least encouraging that the issues are being raised.

The problem with the French tax system is not it's lack of progressivity, but it's inscrutability. I started a company in France in 2008, and that's because I failed in doing so in 2007, as it took too long to understand the simplest of things: What type of company to start.

There are a seemingly infinite amount of company types, all with their own tax structure and their own deducations and their own special cases. Not even the accountants I talked to could tell me how many different types of companies existed in France. And when they recently decided to make it easier to start a company in France, they did so not by removing types, but by adding yet another type of company, in practice therefore making it even harder.

I get papers from several different parts of the French state asking me for different kinds of taxes, hardly understanding what each of them do. Especially confusing is the fact that one of the papers are from two organizations. How does that work? Is it RSI or RAM I'm actually paying to? RSI seems to handle social security and RAM the health insurance. Except of course that this is the same thing!? And why did I go to an agency called URSSAF to start the company, and not have anything to do with them after starting it? What does URSSAF really do? I haven't got a clue.

I ended up paying an accountant to take care of everything. I have no idea if I payed too much or too little tax in France, it's simply beyond comprehension for anyone who isn't a full time accountant. But it seems like exactly everything is deductible, making for another injustice. Start your own company and suddenly all your expenses becomes tax free.

Well, in any case, all of that is over now. I moved to Poland. It seems to be easier and more understandable here. (Although not quite as easy as in Sweden). If France should do any ind of tax reform, they should make a huge simplification where they have a consistent tax level for everyone no matter what kind of company, or employee you are.

I agree with this