Democracy in a polarized society 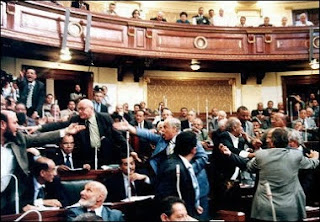 What are some of the institutional arrangements that can work to preserve a functioning democracy in a society with extensive inequalities of wealth and power?

This is a key question in part because we can easily see the factors that work against the democratic outcome. A Berlusconi in Italy is capable of dominating the political institutions in his country through his wealth and control of a media empire. An Abhisit in Thailand is able to maintain his political power through his reliance on the support of the armed forces and their willingness to use force against popular movements like the Redshirts (link). And the sham democracy resulting from elections rigged by Burma's junta last fall demonstrates how the generals can exert their rule through and behind ostensibly "electoral" legislative institutions.

These questions are most relevant today because of the people's movements in Tunisia and Egypt. But they are also relevant in many of the "semi-democracies" in the world today -- for example, Putin's Russia, Georgia, and Uzbekistan. In each case a strongman and his political organization are able to intimidate opponents and govern through a charade of elections. There are some of the trappings of democracy -- elections, parties, legislatures -- but there is the reality of authoritarian rule backed ultimately by the threat of violence -- against journalists, against the opposition, and against the people if they bring their politics into the street. And behind all is the reality of the plutocrats -- the wealth holders whose property originates in privileged access to the state and depends on the state for its continuation.

An idealized conception of democracy might go along these lines. The population as a whole is entitled to decide the basic issues confronting the nation. Individuals have an unencumbered right to form and express their opinions about the issues of the day. Individuals have the right to join and support political organizations (parties) whose program they wish to support. Individuals and organizations have the right to compete for political office, legislative and executive. An elected legislative body has the authority to enact legislation.  All parties in society are fundamentally committed to supporting the constitutionally defined democratic processes, whether or not their preferences prevail. No party has the ability to overturn the outcomes of democratic competition. And no group has such a concentration of resources that it is able to dominate political outcomes.

These assumptions are idealized in a variety of ways, but I think they capture our general intuitions about a functioning democracy.

These are simple assumptions. But they are incredibly demanding in the context of many historical circumstances. It is almost always true that there are groups that have very strong material interests in one set of outcomes over another and have access to resources that would permit them to go extra-constitutional. They may use money to corrupt the process; they may support paramilitary organizations and militias to protect their interests; and they may form alliances with the military and police to gain their will. (El Salvador in the 1980s is a terrible but apt example.)

First, an independent press (and Internet news and communications world) can serve as a check on anti-democratic and corrupt usurpation of the democratic process.

Second, a broadly shared public commitment to constitutional procedures can help to reduce the likelihood of anti-democratic seizure of power, whether by leaders or the military.

Third, a strong ethical conviction within the officer corps of the need for constitutionality in the conduct of the military can reduce the likelihood of intervention in politics by the army.

Fourth, a tradition of a neutral and independent judiciary can constrain the emergence of anti-democratic leaders.

Fifth, and most important, the citizenry can remain vigilant and courageous in the face of corruption and anti-democratic actions by government, legislators, and power-holders. Citizens can return to the streets when their government deviates from constitutionality and democracy.

None of this makes it seem as though the creation of a functioning democracy is easy work or a process that inevitably leads to success. In fact, it suggests the contrary: that polarization, severe inequalities of wealth and power, and the existence of a military with entrenched economic interests in an authoritarian society make the attainment of a genuinely citizen-centered democracy inordinately difficult.

The best hope for a democratic Egypt, it seems, is the existence of far-sighted groups of democratic activists who can help create the institutions of individual participation and governance that democracy requires; and who can use the tools available to them (including the publicity of the Internet and political organizations of the masses of Egyptians) to create a working constitution and the institutions and loyalties that will support it.

These questions fall within what might be called "applied theory of democracy" rather than ideal theory. Adam Przeworski is a political scientist who has made particularly incisive contributions to this aspect of the study of political institutions, especially in the context of emerging democracies. Particularly useful are Democracy and the Limits of Self-Government

Some may argue that the existence of extreme inequality of wealth and power is sufficient evidence to say that a society is not a functioning democracy, even if it pretends to be. The distinction between a democracy and, say, a publicly held corporation is that in the former each citizen's vote counts equally while in the latter each vote is weighted by that shareholder's proportional stake. Therefore in a democracy where all power belongs to the voter, there can be no significant disparity in wealth and power.

What about organized Labor. I know that Labor organizations can be corrupted by the same processes that corrupt political parties, but wouldnt they, ideally, function to offset the power of wealthy stakeholders in a system?

I imagine that you wanted to say Abhisit