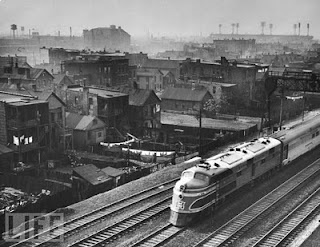 Historian Thomas Sugrue is a national expert on the state of persistent racial inequalities in our nation today.  His The Origins of the Urban Crisis: Race and Inequality in Postwar Detroit

set the standard for the field of recent urban history when it appeared in 1996. His most recent book, Not Even Past: Barack Obama and the Burden of Race, provides a vivid statement of his current views.  The title refers to William Faulkner's line in Requiem for a Nun, "The past is not dead. In fact it's not even past."  It is a particularly apt metaphor for the status of race in America today.

The book addresses the often-heard view that President Obama's election demonstrates that we live in a post-racial society.  The argument is that if the United States is able to elect an African-American president, then surely issues of racial prejudice are in the past.  However, Sugrue provided current data on disparities of income, employment, education, residence, health, and wealth that demonstrate that structures in our country continue to reproduce grave racial disparities.  By any measure, we are not post-racial.

Here are a few factual findings from the book:


The most persistent manifestation of racial inequality in the modern United States has been racial segregation in housing and education.  From 1920 through 1990, patterns of black white segregation hardened in most of the United States, despite shifts in white attitudes about black neighbors, and despite the passage of local and state antidiscrimination laws and the enactment of Title VIII of the Civil Rights Act (1968) which prohibited housing discrimination nationwide. (101)

Persistent residential segregation compounded educational disparities.   Beginning in the late 1970s, when courts began a thirty-year process of abandoning the mandate of Brown v. Board of Education, school districts around the country resegregated by race, especially by black and white. (103)

Social scientists have documented employers discriminating against job applicants with comparable credentials when one has a "black" name or has a place of residence in a known "black" neighborhood. (105)

A couple of empirical sources are particularly central to Sugrue's argument.  One is the 2007 book by William Julius Wilson and Richard Taub, There Goes the Neighborhood: Racial, Ethnic, and Class Tensions in Four Chicago Neighborhoods and Their Meaning for America

, which provides quite a bit of empirical data about neighborhood racial attitudes in Chicago.  Another crucial piece of empirical evidence that plays a large role in Sugrue's findings is a major ongoing social-science research project coordinated by the Russell Sage Foundation, the Multi-City Study of Urban Inequality (link).  There are separate volumes on Detroit, Boston, Atlanta, and Los Angeles, and there is a synthesis volume that tries to draw conclusions from all the studies (Urban Inequality: Evidence from Four Cities (Multi City Study of Urban Inequality.)

).  The introductory chapter by Alice O'Connor is available on the website; link. Here are a few passages from the introduction:


Nowhere are these intertwined problems more vividly captured than in the complex economic, gender-based, and racial and ethnic divisions of contemporary urban America. In major cities nationwide, overall economic growth is accompanied by higher than average rates of unemployment and poverty, concentrated especially in low-income, working-class minority neighborhoods that have only recently begun to show signs of recovery following decades of steady decline (U.S. Department of Housing and Urban Development 1999). Still, the low-skilled urban workforce, greatly expanded by the “end of welfare,” has little access to local jobs that provide living wages, employment security, and adequate benefits. (1)

Explaining these economic, spatial, and racial divisions is the central purpose of the Multi-City Study of Urban Inequality, a unique inquiry launched in the early 1990s by an interdisciplinary team of social scientists with sponsorship from the Russell Sage and Ford foundations. Based on surveys of households and employers in the metropolitan areas of Atlanta, Boston, Detroit, and Los Angeles, the study affords a comprehensive and systematic look at the roots of inequality in labor markets, residential segregation, and racial attitudes. (2)

The significance of race in urban inequality is to be found not in any single place but in various aspects, and at multiple levels, of social experience: in discriminatory behavior, policies, and institutional practices; in the structural segmentation of labor markets and residential space; and in the attitudes, stereotypes, and ideological belief systems through which people make sense of broader social conditions and determine their own policy preferences. Race has a deep and enduring historical significance as well, still visible in residential color lines constructed by years of racial exclusion, violence, and overtly discriminatory policies; in the persistent racial gaps in education, skills, and capital that stem from opportunity denied; and in the mistrust between minorities and local law-enforcement agencies that has once again erupted around the issue of racial profiling. And race has significance as the basis of a color-coded sense of social hierarchy that affects individual attitudes and behavior, and that is embedded in social structure as well as in shared cultural norms. (5)

The essays in this volume do not tell a simple story. They point to intergroup attitudes, residential and industrial location, discriminatory practices, and the declining prospects for low-skilled workers as important, interlocking sources of inequality across metropolitan America. But they also point to several conclusions about race, both as a shaping force in the distribution of opportunity and as a variable in social scientific analysis. While not offered as a statement of consensus, they do advance the ongoing debate about race and inequality in important ways. (27)

This is careful social scientific research, and it contributes to a much better understanding of the mechanisms that produce and reproduce urban poverty and persistent racial gaps. These mechanisms are both structural and ideational; the processes that lead to discrimination in employment, for example, include both structural factors like urban transportation, and ideational factors such as racial stereotyping by recruiters.

So race continues to be a determining fact of life for many millions of Americans.  But here is the other part of Sugrue's story: our public discourses, and our political process, are virtually silent about these facts.  We simply do not honestly confront the realities of race, whether in electoral competition, in the media, or in other forms of public debate. And we need to.
Posted by Dan Little at 5:00 PM

A few years ago I was evicted from my apartment, not because of anything I did, but rather because my landlord signed up for some government renewal program that required him to rent only to households below a certain level of income. I offered to pay a higher market rate to keep my place, but to no avail because apparently one of the rules for this program is that no units are exempted. I eventually moved to a nicer neighborhood that is "more appropriate for my race and income", but it comes with a difficult commute to work, one I'd gladly move back to my old neighborhood to ease. It's ironic how government housing policy helps maintains our system of socioeconomic apartheid.

I'm not writing to whine about reverse discrimination, only that I don't believe there's anything unjust in allowing those of us who are happy living among people of color to benefit from reduced rents. And as this awareness spreads the cost differential will narrow, as will the ability to predict a person's race from his or her zipcode.