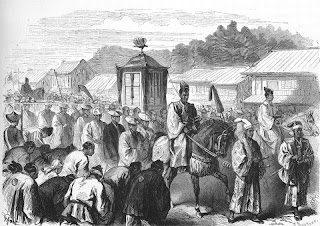 Steve Pincus offers a sweeping and compelling reinterpretation of the English Revolution in 1688: The First Modern Revolution

. Along the way he provides a review of existing theories of revolution -- Skocpol, Huntington, Barrington Moore, and Goldstone, in particular (chapter 2). Pincus's definition of revolution goes along these lines:

Revolutions thus constitute a structural and ideological break from the previous regime. They entail changes to both the political and socioeconomic structures of a polity. They involve an often violent popular movement to overturn the previous regime. Revolutions change the political leadership and the policy orientations of the state. And revolutionary regimes bring with them a new conception of time, a notion that they are beginning a new epoch in the history of the state and its society. (kindle loc 549)

Pincus criticizes each of the prevailing theories of revolution. Fundamentally Pincus's criticism is that these theories share a common error of conceptualization: they work on the assumption that revolutions are the outcome of a conflict between a rigid, conservative, and exhausted state, on the one hand, and a movement of modernizers, on the other. Tocqueville embodies this assumption in his own history of the French Revolution -- the defenders of the Ancien regime are defeated by economic and social reformers (Ancien Regime and the French Revolution). But Pincus argues that the historical reality was quite different, in France, Russia, China, the Ottoman Empire, and England.

So it is fissures and catalysts created by the state's own processes of modernization that create the impetus towards revolution, according to Pincus. But what is modernization? Here is Pincus's brief account:


By state modernization I mean a self-conscious effort by the regime to transform itself in fundamental ways. State modernization will usually include an effort to centralize and bureaucratize political authority, an initiative to transform the military using the most up-to-date techniques, a program to accelerate economic growth and shape the contours of society using the tools of the state, and the deployment of techniques allowing the state to gather information about and potentially supporess social and political activities taking place in a wide range of social levels and geographical locales within the polity. (kindle loc 613)


Revolutions are more likely in situations in which the modernizing regime is not clearly perceived to have a monopoly of the forces of violence.... When the modernizing state quickly demonstrates its control of resources and disarms the opposition, as in seventeenth-century Denmark and Sweden or late-nineteenth-century Japan, revolutions do not occur. (kindle loc 699)

So the causal narrative the Pincus offers goes along something like these lines:
What this narrative discounts is quite a bit of what other theories of revolution place in the foreground -- under-class revolt, state breakdown, demographic change, ideological conflict, the disruptive social effects of war, and fiscal crisis, to name several. Pincus is too good a historian to truly overlook these factors, and they all come into his narrative of the English Revolution. But when it comes to offering a "theory" of revolution, Pincus is led down the same rhetorical path as the authors he criticizes: he wants to identify a single factor that "explains" the occurrence of revolution. Within the viewpoint of that single factor, he is willing to interweave the "secondary" factors mentioned here; but there is an intellectual desire to identify a single, most-important factor. And this seems misguided.

Better is the approach taken by McAdam, Tarrow, and Tilly in Dynamics of Contention. Fundamentally, they reject the impulse towards any kind of single-factor theory of revolution or any other kind of contentious politics. They argue that these large social outcomes are the result of the concatenation of a diverse range of social mechanisms and processes, none of which is paramount.


To call the events of 1789 "contentious politics" may seem to demean a great revolution. This book aims to demonstrate that the label "contentious politics" not only makes sense but also helps explain what happened in Paris and the rest of France during that turbulent summer. ... Further [the book] shows how different forms of contention -- social movements, revolutions, strike waves, nationalism, democratization, and more -- result from similar mechanisms and processes. It wagers that we can learn more about all of them by comparing their dynamics than by looking at each on its own. Finally, it explores several combinations of mechanisms and processes with the aim of discovering recurring causal sequences of contentious politics. (4)

Revolution is an instance of what McAdam, Tarrow, and Tilly call "transgressive contention" (7), but there are important examples of transgressive contention that are not revolutionary -- for example, the American civil rights struggle, cycles of protest in Italian cities, the Mau Mau rebellion, and other examples.

So Dynamics of Contention offer a serious methodological alternative to all of the theories of revolution mentioned here: rather than looking for a small number of structural characteristics that "cause" or "inhibit" revolution, we are better served by moving down to the meso- and micro-levels of mobilization, claim-making, repression, state building, tax collecting, and ideological competition that constitute the real causal stuff of revolution and contention.

It is worth observing, further, that the Dynamics of Contention approach -- identifying discrete mechanisms and processes of contentious politics -- offers vastly better resources for investigating and explaining the wave of revolts, uprisings, and popular movements that are taking place today across the Middle East than any single theory of revolution would provide.  The processes of grievance-making, group mobilization, communication, escalation, brokerage, and state tactics of repression that MTT describe are of obvious relevance in trying to understand the last few months of unrest in Tunisia, Egypt, Bahrain, Libya, and other countries. In particular, none of the macro-theories -- class conflict, state breakdown, or crises of the modernizing state -- seem to shed much light on these events.  What is occurring seems to be much more akin to the path-dependent, multi-causal kind of process that McAdam, Tarrow, and Tilly describe.

(McAdam, Tarrow, and Tilly have been discussed several times here, including link, link.)
Posted by Dan Little at 3:28 PM

A little off-topic but just want to mention that if you delete and re-download your Kindle books, they should start showing good ol' page numbers.

Add China to those who didn't fall off the tiger, quite the miracle given the span and rate of change.
The Dynamics of Contention approach also seems better suited to analyzing financial crises than our hunt for a primary root cause. Very easy to underestimate the complexity of systems that are composed of large numbers of simple components.