Civil society in a globalizing world 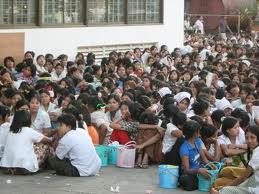 An important component of western political theory since Locke and Rousseau is the notion of civil society—the idea of a society in which members have a variety of cross-cutting activities and associations, and where the state is not the sole source of social power. On this conception, a civil society is one that is characterized by multiple associations, free activities and choices by individuals, and a framework of law that assures rights and liberties for all citizens. It is a society with multiple forms of power and influence, minimizing the potential for exploitation and domination by powerful elites or the state. And it is a society in which citizens have developed a sense of mutual respect and consideration for each other. The fact of civil association serves to enhance the strength of collective identities among citizens, by building new loyalties and affiliations. Citizenship and unity are built through association with other citizens and the knowledge that they can pursue their interests and values through their associations (Robert Putnam, Better Together: Restoring the American Community

, Bowling Alone: The Collapse and Revival of American Community

). But we can emphasize as well the importance of civil associations as a counterweight to the power of the state. Citizens have greater security when they can be confident that the state cannot act against their interests with impunity.
What is involved in sustaining a civil society? What are the conditions that enhance civility within a community? There are several factors that are particularly important. There is solidarity—some degree of shared identity among the individuals who make up the society as groups with interests in common. There is a sense of justice—confidence that the basic institutions are fair to all. There is confidence in the future, that one’s children will have reasonable (and improved) life prospects. There is a sense of dignity—of being treated with human dignity, of being assigned equal human worth. And there is a need for stable, fair, and predictable institutions that give citizens the confidence that they can pursue activities, form associations, and engage in civil discourse without fear. When these conditions are satisfied we can have the greatest confidence in the stability and flourishing of a civil society.
Several of these features fall within the concept of what John Rawls calls a well-ordered society. Rawls introduced the concept of a well-ordered society in A Theory of Justice

. It is the conception of society “as a fair system of cooperation over time from one generation to the next, where those engaged in cooperation are viewed as free and equal citizens and normal cooperating members of society over a complete life” (Justice as Fairness: A Restatement

: 4). Citizens within a well-ordered society respect one another; they have confidence that their most basic interests are fairly treated; and they have confidence that the basic institutions of society permit them fair access and permit them to pursue their conceptions of the good. A well-ordered society is thus a powerful and pervasive foundation for a stable society, and justice is an important causal factor in sustaining and reproducing a society. The underlying hypothesis is that shared moral values, including particularly the values, that determine the terms of social interaction, create the grounds of stability in a society. And profound disagreement about these values creates the possibility of serious conflict. (Here are a few earlier postings on Rawls's views in this area; link, link).
These ideas find their most common application in the context of local or national communities. How does this concept pertain to the idea of a world society? Is there any meaning we can assign to the notion of a global civil society? Or does this concept apply only to connected populations engaged in face-to-face interactions with each other? Is a global civil society feasible? This would be a world in which all persons recognize and respect the human reality and worth of all others—near and far. It is a world in which people are tied together through cross-cutting civil associations—local, national, and international.  These may include labor organizations, women’s organizations, environmental organizations, or religious groups. It is a world in which persons share a sense of justice—they share a basic agreement on the essential fairness of the institutions that govern their lives. And it is a world in which all people have grounds for hope for the future—that there are opportunities for them to improve their lives, that they will have fair access to these opportunities, and that their children will have better lives than they themselves have had. Such a world has every prospect of sustaining stable, peaceful, and civil social life—both local and international.
How does a theory of global justice relate to this vision (The Paradox Of Wealth And Poverty: Mapping The Ethical Dilemmas Of Global Development

)? The connections are profound. Justice requires an urgent commitment to ending poverty throughout the world. It requires a commitment to democracy and human rights—and the effective legal institutions that can secure both. It entails adherence to the values of fairness and human equality, and the importance of reshaping international institutions with these values in mind. And these are precisely the values that are needed to establish the basis of peaceful civil society. If these values are genuinely and deeply embedded in our planning for the future—and if the people of the developing world become convinced that these are real, guiding priorities for the people and governments of the wealthy world—then the potential bonds of international civility will be established. And at the country level the positive institutions of law, democracy, and economic opportunity will reinforce the values of civility and mutual respect.
So the important values that pertain to just global development are arguably critical to a decent future for humanity. A world order that is not grounded in a permanent commitment to human dignity and justice is not only disqualified from the perspective of morality. It is likely to be an increasingly unstable and violent arena for deep and desperate conflict. So for our own sakes and for the sake of future generations we need to commit ourselves in practical and enduring ways to the establishment of global justice, an end to poverty, and the extension of effective democratic and human rights to all persons in all countries.
Three specific points are particularly central. First, poverty is not simply a problem for the poor or for poor countries. Rather, it is a problem for the world, and one that we must confront with determination and resources. This means that we need to develop plans that have a likelihood of success for poverty alleviation; we need to work toward the political consensus that will be needed in order to carry these plans out; and we need to exercise our democratic rights and voices so as to bring about the large commitment of resources that will be needed.  The Millenium Development Goals place this as the first priority (link).
Second, the equality of worth of all persons is an essential moral fact. All persons are equally deserving of attention. And much follows from this fact. The extreme inequalities of life prospects between citizens of the north and the south are inconsistent with this principle. The persistence of anti-democratic and authoritarian regimes throughout the developing world is inconsistent with the equal rights and worth of the citizens who suffer under those regimes. And the inequalities of voice that are present in current international institutions represent an affront to the moral equality of all persons who are affected by those institutions.
Finally, democracy and human rights are critical. It is only through effective democratic institutions for government and decision-making that the interests and concerns of citizens will be aggregated into just policies and progressive social institutions. Democratic institutions permit all citizens to influence the policies that affect the terms of their lives, and they represent a meaningful obstacle to the emergence of exploitation and domination of the powerless by elites.
Are there examples of international settings that embody some of the features of a global civil society? The European Union, and the pan-European institutions and identities that the EU is in the process of forging, offer a promising example of a system that can bring about a just international order. Here we find fledgling experiments in the creation of solidarities that transcend language, religion, nation, or place. And we find an emerging discourse of solidarity that may provide the political basis that will be needed to bring about global justice (and the international transfer of resources and knowledge that this will require). There is a measure of “global thinking” among European citizens that offers a basis for optimism about the feasibility of an engaged world citizenry. OECD institutions have already gone a long way in the direction of giving meaningful priority to the needs of developing countries. The OECD and the Development Assistance Committee represent effective and broadly supported institutional agents of change within the processes of economic development. And surveys of European public opinion suggest an emerging and strengthening public support for global justice (link, link).
Finally, what does the concept of a global civil society imply for the durability of national or cultural identities? Can the Brazilian, Sikh, or Muslim at the same time be a member of a global civil society? This question can be posed at virtually every level of scale—village, region, nation, or global system. And the answer is everywhere the same. One can be both cosmopolitan and Muslim, both Brazilian Catholic and citizen of the world (Martha Nussbaum and Josh Cohen, For Love of Country?

), (Charles Taylor, The Ethics of Authenticity

). In other words, this conception of a just global civil society does not presuppose a process of homogenization of world cultures. Instead, it presumes the development of a cross-cultural consensus about the importance of civility as a necessary context for the many cultural, religious, or national differences that will persist and that constitute one of the positive engines of creativity that are available to the world’s people.
Posted by Dan Little at 12:06 PM

Very good post, I used a conclusion of yours about how we could better organize ourselves on my blog. http://sparc5.blogspot.com you might enjoy it.