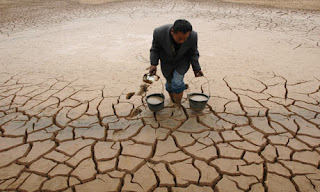 It seems likely enough that one of the largest global security issues in the next fifty years will be food and water.  There is a brewing food crisis underway already, with prices for staple grains rising world wide, and poor countries are beginning to experience the consequences.  But a crisis in fresh water seems not too far in the future as well.  Both these necessities depend on inherently scarce resources: arable land and large sources of fresh water.  Along with energy, these goods are crucial to every person and every country in the world; and this in turn suggest the possibility of serious conflict over these resources in the future.

So what makes food and water a global security crisis? How does the possibility of dearth at the family level get transformed into the possibility of international conflict? Rising food prices create social unrest at the national level long before they lead to famine or malnutrition. International grain markets have been unstable over the past decade, with periodic upward spikes in prices. And grain riots have occurred as a consequence in a number of developing countries. This piece from DemocracyNow from 2008 documents demonstrations and riots across a range of African countries (link), with an interview with Raj Patel, author of Stuffed and Starved: The Hidden Battle for the World Food System

.  Here are some updates from the Christian Science Monitor (link) and Energy Bulletin (link), including riots in Algeria in 2011.

The bottom line of several of these reports is fairly simple: the international trade system for grains, including especially rice and wheat, periodically undergoes abrupt and prolonged price rises, and these price increases have dire consequences for urban poor and middle class people in the developing world.  When a large population mobilizes in protest against rising food prices, national governments are at risk. And this is where the security risk comes in: when countries like Algeria or Morocco suffer serious instability, this has the potential of leading to international instability in the region as well.

Here is another, more distant cause of international tension that comes from the food crisis.  Governments are interested in taking steps to provide greater food security for their own populations.  And this sometimes involves taking actions that are harmful for other countries or for other populations.  One symptom of the pressures mounting on the world food system is a widespread land grab of agricultural land around the developing world.  Here is a report by the United Nations Food and Agricultural Organization (FAO) on this issue (link) and a piece from the Guardian that describes the situation a few years ago (link), and here is a FastCompany story about China's land purchases (link). The FAO report documents a significant transfer of land ownership from developing countries to middle and upper income countries; this implies serious future constraints on the development possibilities available to those countries.  And it suggests a new form of colonialism -- not direct governance, but substantial absentee ownership.  This too has the potential for stimulating international conflict.

So what about water?  Here is a recent report by the Council for Foreign Relations on the interconnected consequences of fresh water shortages in different parts of the world (link).  In this piece the effects of China's water crisis are traced internationally.  Here is an inventory of resources by GlobalPolicy on international conflicts over water (link); it is a long list of potential conflicts.  Here is the introduction the editors offer:


As demand for water hits the limits of finite supply, potential conflicts are brewing between nations that share transboundary freshwater reserves. More than 50 countries on five continents might soon be caught up in water disputes unless they move quickly to establish agreements on how to share reservoirs, rivers, and underground water aquifers. The articles and analysis below examine international water disputes, civil disturbances caused by water shortages, and potential regulatory solutions to diffuse water conflict.

Chinese-financed dam projects in Burma and other parts of Southeast Asia indicate how high the stakes are. The great rivers of Southeast Asia now face a major of challenges as a result of plans for hydroelectric dams regulating flow to downriver users. Here is a piece from the Irrawaddy on the controversies surrounding the Myitsone Dam in northern Burma; link.  Similar issues arise on the Mekong River and other great rivers in the region; link.  The problems that have arisen with regard to dams in Southeast Asia include displacement of villages and towns, serious environmental damage, and significant lowering of water levels in many of the great rivers of the region.  Here is a background piece in Global Policy Forum on China's massive expansion of hydropower; link.

These sources of conflict over the most basic necessities of life suggest the need for serious international planning today to arrive at equitable and sustainable regimes for resolving conflicts over resources in the future.
Posted by Dan Little at 6:39 PM

Water is a key component in determining the quality of our lives. Today, people are concerned about the quality of the water they drink. Although water covers more than 70% of the Earth, only 1% of the Earth's water is available as a source of drinking. Yet, our society continues to contaminate this precious resource.