According to Kate Pickett and Richard Wilkinson in The Spirit Level: Why Greater Equality Makes Societies Stronger

, income inequalities in a society are a source of a variety of social problems in that society, almost without regard to the absolute level of income in the society.
Their basic measure of inequality across countries and states in the United States is the ratio of income from the top quintile to the bottom quintile. (They also sometimes make use of the Gini coefficient.) The quintile income ratio varies across OECD countries from a low of about 4 (Japan) to a high of just under 10 (Singapore). The United States has the second highest ratio, at about 8.5 (figure 2.1).

In order to empirically evaluate the impact of a society's income inequalities on social well-being, they construct an Index of Health and Social Problems for each country and US state. The index incorporates --
These ten factors are all weighted equally. Here is their most basic graph plotting the index against income inequality among OECD countries (figure 2.2): 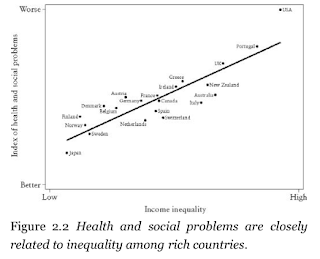 A similar but looser relationship obtains between these variables for US states; figure 2.4. And they find similar relationships between the UNICEF index of child wellbeing and income inequality; figure 2.7. So their most basic claim is well substantiated: there is a strong negative relationship between social inequalities and social well-being. Most importantly, they maintain that this relationship is causal.

This is indeed a striking hypothesis. Their argument is not that material deprivation causes social harms and high inequality societies have more material deprivation; it is rather that the degree of inequality is itself an important cause of social harms. Further, they maintain that these relationships persist in affluent societies. And they are explicit in accepting that this implies a causal relationship between a structural feature of society and individual outcomes (chap 3).

Some of the most interesting content in the book comes in the form of specific empirical analysis of some of the kinds of social malaise that are rising in society, and some of the mechanisms through which inequalities contribute to this rise. Chapter 3 takes on stress and anxiety. Figure 3.1 documents a generally rising level of anxiety among men and women college students from the 1950s to the 1990s. The authors relate this rise to an increase in social anxieties: feelings of inadequacy, friendlessness, and separation from community (kl 745). And these features of social relationship, they believe, derive from rising hierarchy and inequality.

Another important mechanism of social harm is the erosion of trust that modern societies have experienced. This too the authors attribute to rising hierarchy and inequality and the pronounced separation this creates among members of society. Figure 4.1 illustrates this relationship. 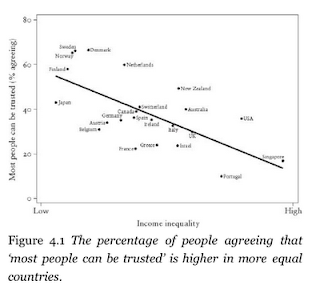 The data presented here are very striking: a standard set of scatter plots demonstrating a positive relationship between inequality and a variety of social harms. In each case the authors attempt to provide an account of a mechanism that plausibly leads from inequality to the higher incidence of the social harm.

It strikes me, though, that all the mechanisms amount to the same sociological idea: that extreme inequality leads to a set of psychological conditions that in turn produce the harm in question. They emphasize status differences on the one hand (inequality) and friendship on the other (equality) as powerful determinants of social well-being and harm (kl loc 2927).

Much of this argument seems to come down to some familiar hypotheses in sociology: that anomie is a social feature that produces social and individual harms (Durkheim) and that the strands of community are favorable to human wellbeing (Tonnies, Putnam). Inequalities are toxic, according to this line of argument, because they undermine the strands of social relationships and community among individuals; they produce a situation of rising anomie and separation among individuals in society. Societies with lower inequalities allow higher levels of trust and community to persist and this gives rise to fewer social problems.

It is an appealing argument, but in the end I find it monocausal and therefore less convincing than the authors would wish. I'm finding it to be "Durkheim on epidemiological steroids". Even if we accept the point that reciprocity and mutual respect are key components of a society's health, there are other factors that undermine these besides economic inequality -- racism, ethnic hatred, sexism, and other kinds of "othering" besides income inequality. I appreciate the book. But I'd like a more multicausal analysis of the findings.

It is also interesting to ask whether the authors think there is a tipping point when it comes to inequalities. Is there a level of income inequality where inequalities are a non-factor when it comes to the social ills that they highlight? Is the level of inequality current in Sweden just fine as a foundation for social cohesion and reciprocity? Or is the situation more analogous to exposure to second-hand smoke: every level creates a risk? In other words, is it only high inequality societies that create these harms, or does every society north of Babeuf do so to some extent?
Posted by Dan Little at 11:29 PM

c. December 2009 I attended Wilkinson's presentation of "The Spirit Level" at UW, Seattle. It was an overflowing crowd. At the end of his presentation the response and questions were animated. But later when I read the book I was disappointed, esp. with the evidence. In the 2009 American printing of the book there were 24 charts with identified points and a significant tend line. As an analyst one of my criteria for a significant trend is that a major subset of the data will also show a trend. Twelve of the 24 charts, IMO, failed that test. There was also a 13th showing as I recall a mortality related outcome v. income inequality of the USA. It is clear from working the USA health data that the South is different than the rest: worse health outcomes; worse health behaviors. If you visually take southern data points out of that chart there's no trend. As I recall, for the 12 charts visually deleting 2-3 data obviate the trend. For example, randomly picking Fig 7.1 with an outcome of obesity, if you visually remove the USA and Japan, there's no trend.

There work doesn't convince me that inequality is a cancer on society. Lane Kenworthy among others isn't convinced either. He had a post c. Jan 2010 looking at data issues.

Frank, thanks for the comments and the mention of Lane Kenworthy's critique, which is here: http://lanekenworthy.net/2010/01/18/inequality-as-a-social-cancer/.

"Even if we accept the point that reciprocity and mutual respect are key components of a society's health, there are other factors that undermine these besides economic inequality -- racism, ethnic hatred, sexism, and other kinds of "othering" besides income inequality."

A good example is religious discrimination in post-occupation Iraq. Shi'a–Sunni_relations#Iraq_War

Conflicts between groups are due to a refusal to compromise or an unstable situation. Anyway, for anyone wanting to move past the 'observation' phase toward a 'solution' phase, see this: http://pastebin.com/Q86Zhgs9

Please forgive me if I've misunderstood your point but did you really say that you think a trend is significant if you take a subset of its data and it remains the same? Really?

I can understand if you don't want to be convinced by the data presented; I can understand if you find it disturbing to have preconceived notions challenged by new information but then just be honest about why you disagree rather than make up spurious reasons for not accepting the data. They're adults (Wilkinson and Pickett) they can accept people who don't want to follow the data.

But to reject their findings because they fail some informal, gut-level, irrational test you personally devise is ... well... irrational. The data they present is consistent, comprehensive and transparent (you can download the databases at their website) so please do not attempt to represent your disagreement with it in a rational manner.

You are free to disagree but 'as an analyst' you really should be aware that saying things like;

'It is clear from working the USA health data that the South is different than the rest: worse health outcomes; worse health behaviors. If you visually take southern data points out of that chart there's no trend. '

you represent yourself poorly in my opinion. Of course the trendlines change if you exclude substantial parts of the data!

Sorry if this seems to you a little abrupt but the book was published a few years ago and I'd have thought that by now we really should be moving-on to addressing the policy implications of these insights rather than attempting to criticise the data in a haphazard manner; it has been tested, shaken and rigorously attacked over the last three years and survived all assaults. Can we get on with making progress now, please?

What I find a bit strange about the skepticism here in response to the idea that inequality is socially corrosive is that critics of this book don't acknowledge the force of the large amount of evidence that is presented in this book (and in other books by Wilkinson and other researchers), which makes for a very strong case that high levels of inequality have some negative social effects, including on societal health. Yes, there are obviously other factors that unquestionablly would also have a negative effect on social conditions, such as discrimination, but this doesn't at all affect the main point here. And wouldn't we expect high levels of discrimination and inequality to be correlated? "The Spirit Level" (and other research on the health gradient) offers not only a plausible case that social conditions, including inequality, make a major contribution to societal health and well-being, but develop detailed causal pathways that can explain this observation. Merely to insist that inequality can't have the impact that Pickett and Wilkinson argue for without offering any alternative explanation for the masses of data they offer as evidence seems less a rational argument than a display of dogmatism.