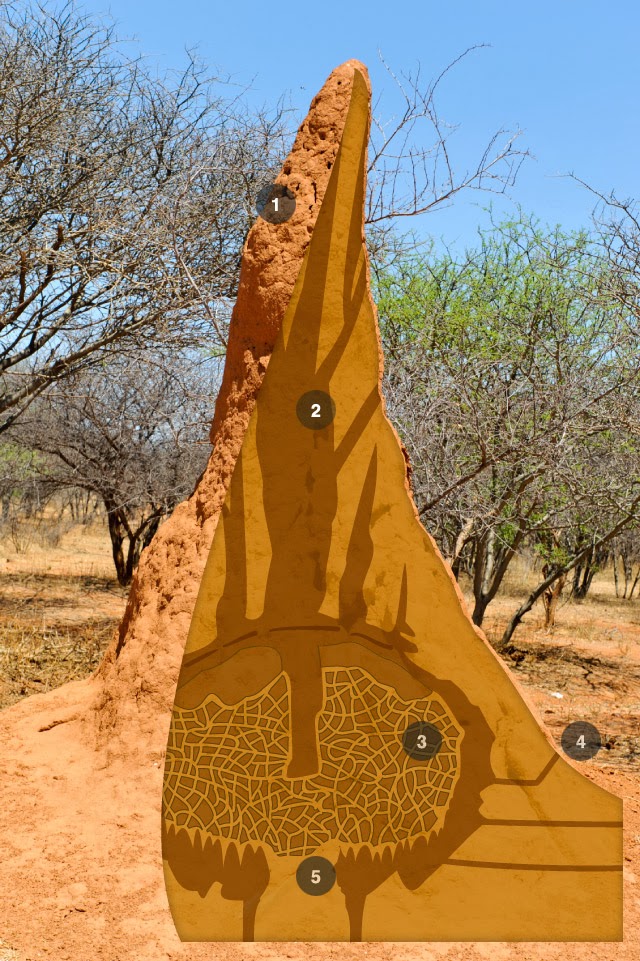 A million termites move around industriously without supervisors or external coordination.  Some months later, a great structure has arisen — a termite cathedral mound. It is a structure that has apparent functionality (figure 2), it is oriented to the sun in a way that optimizes its ability to handle heat and cold, and the design plainly exceeds the cognitive or practical capacity of any single termite. How do they do it? (The BBC video below describes these mounds and their construction.)

This is a hard question because we know quite a bit about what the termites do not do. They do not have architects and project managers; they do not have blueprints guiding their work; they do not have a master plan. Instead, millions of independent organisms somehow coordinate their actions in ways that collectively result in the large structure.

figure 2. The structure of the mound

We would like to have an explanation for how this works; how the individual insects within this population behave in the ways that are necessary to create this vast complex structure.

But we might better say, we are asking for an explanatory narrative, including elements like these:
The force of the explanation hinges on the details we can learn about these powers and capacities of the termites as a species -- these behavioral algorithms. We want to know something crucial about the powers and capacities of the individual insects; we want to know how their routines are responsive to environment and other insects; and we want to know how the emerging structure of the mound leads to the modified activities of the insects over the process of construction.

This narrative highlights a topic we have considered several times before -- the idea of the causal powers of an entity. Most basically, we might look at the individual worker termite as robot controlled by a complex algorithm -- "when external circumstances X,Y,Z arise, carry out the Z routine." The causal powers of the individual worker termite are determined by its algorithm and its physical capacities -- salivation, moving around, carrying bits of mud, and so forth. And the task of explanation is to discover the nature of the algorithms and the ways in which the resulting behaviors aggregate to the observed physical structure of the mound.

We might observe, for example, that a certain kind of insect navigates a maze by following a simple rule: always keep the wall on your left. This rule will sometimes work well; sometimes it will not. But this observation suggests that the insect's central nervous system encodes the decision-making rule in this way. And we might also infer that "maze navigation" is important for the survival of the insect in its normal environment, and so its navigational algorithms will have been refined through natural selection.

We would also like to know something else about the insects and their powers: how did they come to have these particular capacities and algorithms? Here we have a well established explanation, in the form of the theory of the gene, natural selection, and the evolution of species characteristics through differential reproductive success. Here the explanatory challenge is to piece together the nature of the algorithms that would suffice to account for the observed collective outcomes.

It is also of interest in this example that there is a large field of research and discovery within complexity research that hinges on discovering the complex collective patterns that can emerge from simple routines at the level of the individual agent. For example, the "Game of Life" illustrates the power of cellular automata in generating complexity out of simple agent-level routines.


This example is a useful one, not primarily for entymologists, but for us as philosophers of social science. What would an explanation of this phenomenon look like? And a little bit of reflection seems to take us in the direction of some familiar ideas: the idea of things having causal powers that govern what they can do, the idea of the aggregation of complex outcomes from independent activities of large numbers of agents (agent-based models), and the idea that a good explanation gives us an empirically supportable understanding of how something works.