Skocpol on the Chinese Revolution 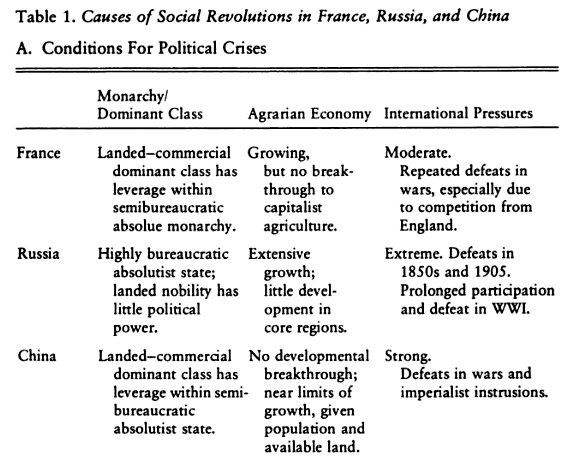 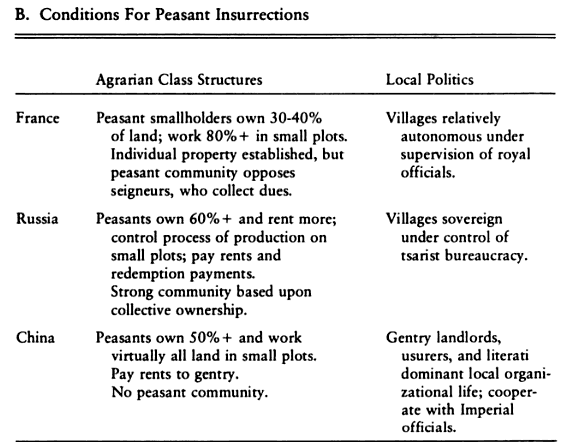 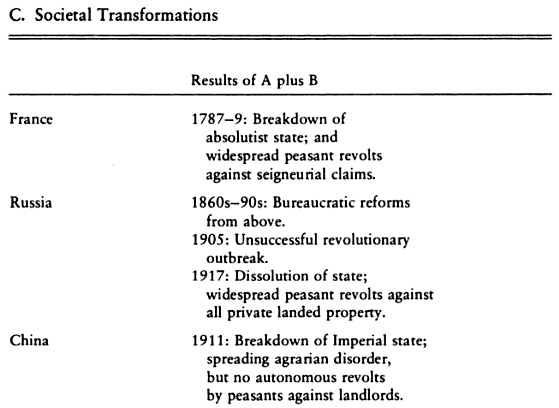 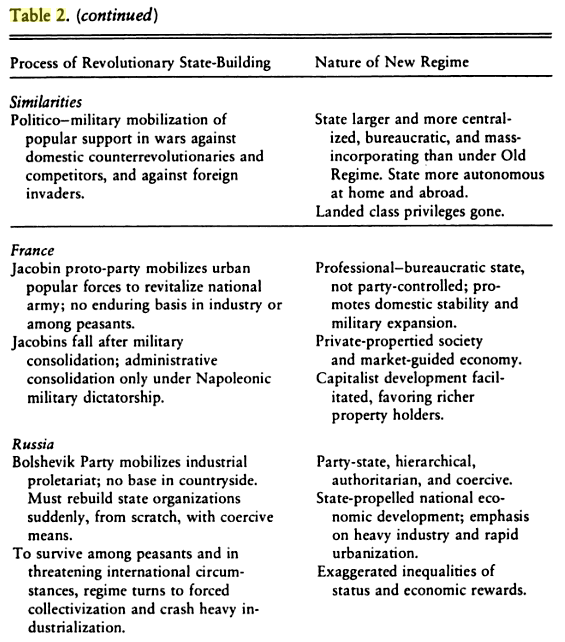 (Sources: States and Social Revolutions, pp. 155, 282)
In States and Social Revolutions: A Comparative Analysis of France, Russia and China (1979) Theda Skocpol set out to discover a causal analysis of the occurrence of social revolution, and she offered case-study narratives of the major revolutions in France, Russia, and China. She provides a 54-page narrative of the Chinese Revolution which can serve as a thumbnail account of the major events and causal factors that made it up. Her narrative is deliberately framed in comparative terms; she wants to locate features of the Chinese situation in relation to relevantly similar characteristics of the French and Russian cases.

Here is Skocpol's definition of a social revolution:
Social revolutions are rapid, basic transformations of a society's state and class structures; and they are accompanied and in part carried through by class-based revolts from below. Social revolutions are set apart from other sorts of conflicts and transformative processes above all by the combination of two coincidences: the coincidence of societal structural change with class upheaval; and the coincidence of political with social transformation. (Introduction)
The summary tables above both mirror the definition Skocpol has crafted and reveal the essence of her comparative causal analysis of the three primary cases. Tables 1A and 1B provide a coding of the states of affairs in France, Russia, and China in what she identifies as the relevant initial structural conditions -- conditions relevant to political crisis and peasant uprisings. Table 1C represents her view of the proximate outcomes of these conjunctions in the three cases -- breakdown of effective state power and emergence of widespread rural unrest. And Table 2 reflects her effort to code the more distant outcomes in the three cases, when the dust had settled -- the nature of the political configurations and state systems that emerged from the revolutions that took place.
This is historical sociology, not social-science history. The goal is not to be a full historical account of these revolutions in detail, but instead to identify relatively limited number of structural and agentic causes that may be relevant to the occurrence of revolution in the individual cases.
It is worth noting what this account does not provide. It does not attempt to disaggregate revolutionary processes into underlying causal social mechanisms. Rather, it presupposes a fairly macro-level conception of causal conditions and factors. This is what allows Skocpol to make use of a Millian method for discovering what she takes to be necessary and sufficient causes for social revolution. And second, it gives no attention to the possibilities of contingency and path dependency. Rather, she is looking for causal conditions that co-occur in some historical circumstances and then lead to social revolution as an outcome. This is the conjunctural part of her story.
This is a very specific conception of comparativist social explanation. It is anti-positivist, in an important sense, in that it expressly rejects the idea that there might be fundamental laws from which the occurrence of revolution might be derived. But it is also anti-reductionist, in that it is not interested in explaining the large outcomes, or similarities of oarge outcomes, based on underlying mechanisms or processes. I find it hard to think of an example of causal explanation in biology, geology, or physics that has a similar structure. Explanations of the transition of a group of tree species within a forest might look similar -- the ecologist looks for macro-level circumstances that favor one species over another. But there is always the underlying mechanism of natural selection and differential rates of reproduction that provides a microfoundation for the explanation.
In Skocpol’s analysis of China several events and structures were most fundamental in the unfolding of China’s social revolution.
The account of the Chinese Revolution provided by Bianco and described in the previous post gives attention to another key factor: the organizational capacity and revolutionary strategies of the CCP. To some extent this runs contrary to Skocpol's vigorous opposition to the idea of revolution as an intentional process. But Bianco is clearly right, that the strategies and coordination of the CCP provided a vital component of the eventual success of the Chinese Revolution.
Moreover, the more disaggregated studies of the Chinese Revolution that have emerged since Skocpol's book make it clear to me that there were deep contingencies in the process as it unfolded, and that multiple outcomes were possible. So the antecedent structural conditions that she identifies did not suffice to bring about the eventual revolution.
Skocpol's comparativist methodology was an exciting innovation when it appeared in 1979. With the hindsight of thirty-five years, however, I am inclined to think that it is a failed experiment. It remains too close to the methodology that asks the researcher to find a set of conditions that vary appropriately with the outcome, and in the end it is methodologically committed to the idea that we can discover an answer to the question, what conditions do all social revolutions share? The critique that McAdam, Tarrow, and Tilly offer of theories of contentious politics that simply look for large generalizations across groups of large scale contentious events seems to apply here as well. The focus in Skocpol's analysis remains too macro, with social revolutions constituting the units of analysis. But as MTT argue, it is more useful to drop down a level or two and look to the mechanisms and processes that make up social revolutions, rather than trying to identify high-level generalizations across groups of cases, whether large-N or small-N.