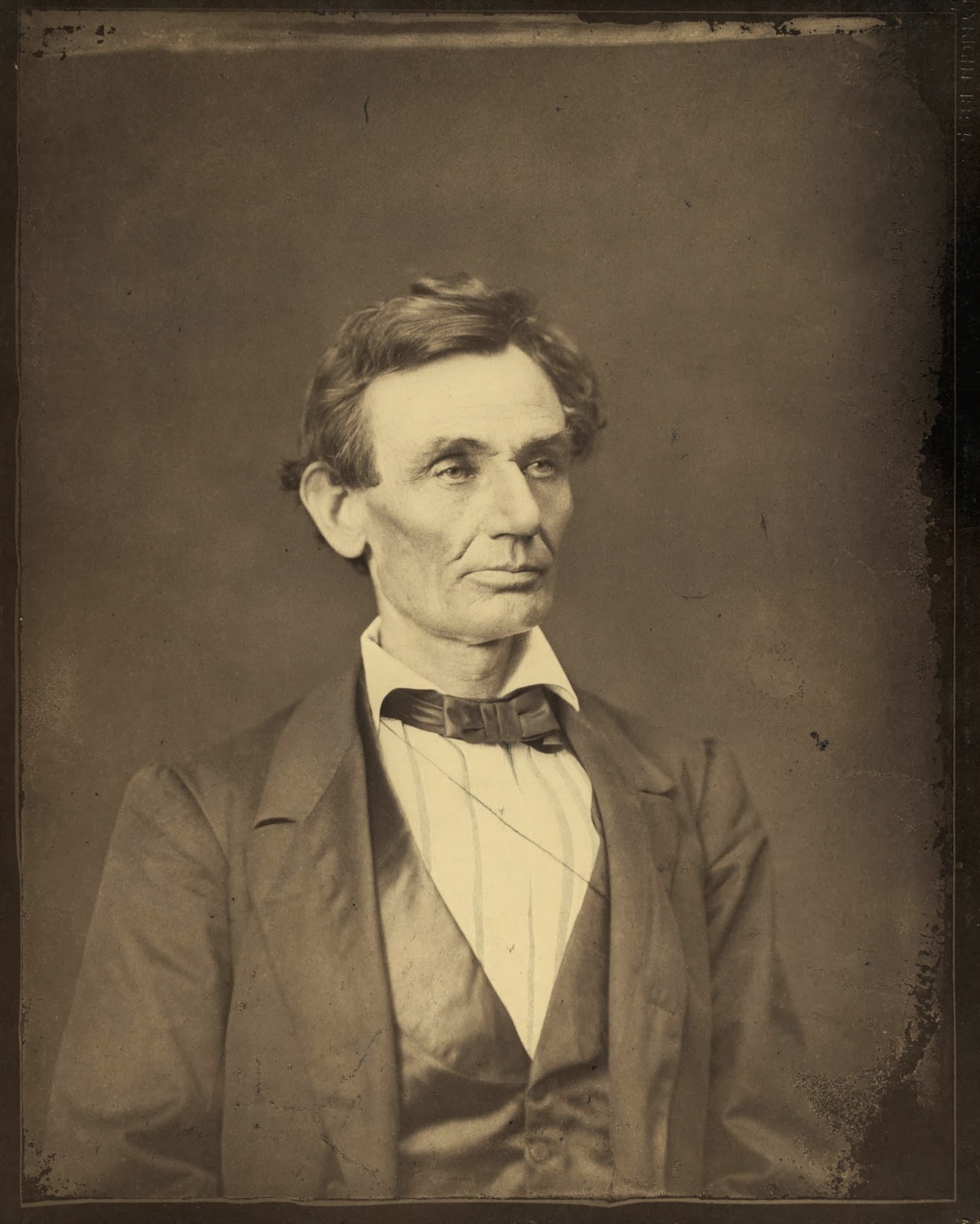 Robin Blackburn has assembled a fascinating book drawing out some surprising connections between Abraham Lincoln and Karl Marx, An Unfinished Revolution: Karl Marx and Abraham Lincoln. Since both thinkers are highly original in their thinking about the worlds they inhabited, I’ve found the book to be absorbing. It consists of a brilliant hundred-page historical essay by Blackburn that draws out the themes in political theory that were of concern to both thinkers and demonstrates some surprising parallels. The book then provides several relevant speeches by Lincoln, several pieces of journalism by Marx about slavery and the American Civil War, letters by Marx including the centerpiece, a letter from Marx to Lincoln on behalf of the International Workingmen's Association; and several miscellaneous short articles by other people about Marx and Lincoln.

Blackburn is the perfect person to do this work. He is a recognized expert on Marx's thought, and he is also an expert on the history of New World slavery. (The American Crucible: Slavery, Emancipation and Human Rights, The Overthrow of Colonial Slavery: 1776-1848). So he is unusually well prepared to draw out the connections between the ideas of Marx and Lincoln on the topics of the Civil War, slavery, and economic competition between the North and the South. He also offers a very interesting analysis of the impact that the large immigration of German workers had on the politics of the North in the twelve years before the Civil War. Here is one illustrative incident:


As the Civil War unfolded, German Americans and their overseas friends furnished vital support to the Northern cause. At the outbreak of the war, a German American militia in St. Louis played a key role in preventing Missouri's governor from delivering the state--and the city's huge arsenal--into Confederate hands. [Marx's friend] Wedemeyer became a colonel, served as a staff officer in St. Louis for General John Frémont, and was put in charge of the city's defenses. (25)

The International Workingmen's Association itself came to have a substantial presence in the United States and brought with it a political agenda advocating racial and gender emancipation. After the suppression of the Paris Commune the headquarters of the IWA was moved to New York, and there were dozens of IWA sections in large Northern cities.


The IWA mustered a demonstration of 70,000 or more in New York in December 1871 to pay tribute to the Commune's tens of thousands of martyrs. The parade brought together the Skidmore Guards (a black militia), the female leadership of Section 12 (Woodhull and Claflin), an Irish band, a range of trade unions, supporters of Cuba's fight for independence marching under the Cuban flag, and a broad spectrum of socialist, feminist, Radical, and Reform politics. (77) 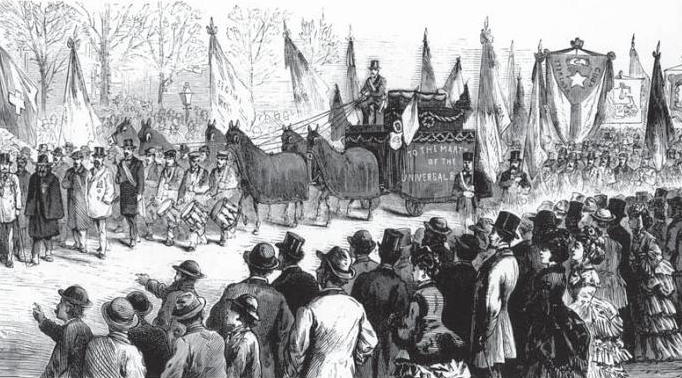 The 1864 letter from Marx to Lincoln is on the occasion of Lincoln's re-election as President. The thrust of the letter is to express support for Lincoln in the effort to end slavery in the United States. Here is the closing paragraph of the letter:


The workingmen of Europe feel sure that as the American War of Independence initiated a new era of ascendancy for the middle class, so the American antislavery war will do for the working classes. They consider it an earnest of the epoch to come, that it fell to the lot of Abraham Lincoln, the single-minded son of the working class, to lead his country through the matchless struggle for the rescue of an enchained race and the reconstruction of a social world. (212)

A reply to this letter was received through the intermediary of Charles Francis Adams, United States Ambassador to Britain. The key lines of the reply are these:


[The government of the United States] strives to do equal and exact justice to all states and to all men, and it relies upon the beneficial results of that effort for support at home and for respect and goodwill throughout the world. Nations do not exist for themselves alone, but to promote the welfare and happiness of mankind by benevolent intercourse and example. It is in this relation that the United States regard their cause in the present conflict with slavery-maintaining insurgents as the cause of human nature, and they derive new encouragement to persevere from the testimony of the workingmen of Europe that the national attitude is favored with their enlightened approval and earnest sympathies. (214)

About one month following the assassination of President Lincoln, Marx sent another letter to President Andrew Johnson, also on behalf of the International Workingmen's Association. It contains a powerful elegy for the President and is perhaps the most moving prose to be found in Marx's writings.


It is not our part to call words of sorrow and horror, while the heart of two worlds heaves with emotions. Even the sycophants who, year after year and day by day, stuck to their Sisyphus work of morally assassinating Abraham Lincoln and the great republic he headed stand now aghast at this universal outburst of popular feeling, and rival with each other to strew rhetorical flowers on his open grave. They have now at last found out that he was a man neither to be browbeaten by adversity nor intoxicated by success; inflexibly pressing on to his great goal, never compromising it by blind haste; slowly maturing his steps, never retracing them; carried away by no surge of popular favor, disheartened by no slackening of the popular pulse; tempering stern acts by the gleams of a kind heart; illuminating scenes dark with passion by the smile of humor; doing his titanic work as humbly and homely as heaven-born rulers do little things with the grandiloquence of pomp and state; in one word, one of the rare men who succeed in becoming great, without ceasing to be good. Such, indeed, was the modesty of this great and good man, that the world only discovered him a hero after he had fallen a martyr. (214-215)

The "Unfinished Revolution" in Blackburn's title refers to the failure of two large forms of human emancipation in the United States following the Civil War that lay at the heart of the political philosophies of Marx and Lincoln -- the full emancipation of African Americans as the descendants of slaves, and the creation of a broad workers' movement that would successfully challenge the power of big business. "If the nonappearance of a US labor party marked a critical defeat for Karl Marx, the failure of the Republican Party to emerge from Reconstruction and its sequel as a party of bourgeois rectitude and reform registered a spectacular defeat for Lincoln's hopes for his party and country" (96). And Blackburn closes his introduction with some speculation about how Marx might have acted had he himself have relocated to America (as Engels briefly visited New York and Boston in 1887).


Just as he saw the importance of the slavery issue at the start of the Civil War, so he would surely have focused on "winning the battle of democracy," securing the basic rights of the producers -- including the freedmen -- in all sections as preparation for an ensuing social revolution.... Marx and Engels would have insisted that only the socialization of the great cartels and financial groups could enable the producers and their social allies to confront the challenges of modern society and to aspire to a society in which the free development of each is the precondition for the free development of all. (100)

The ideas that hold Marx and Lincoln together are emancipation and the basic dignity of the common working man and woman, and the vision of a society in which both freedom and dignity are possible for all.