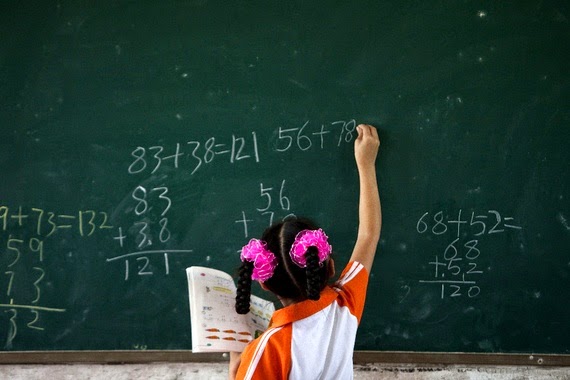 There is a growing accumulation of evidence suggesting that individuals' performance in a wide range of activities is powerfully and insidiously affected by the expectations that are subtly conveyed to them by the people around them. If the people around a child or adult believe the individual will have particular difficulty with an upcoming task, this doubt is conveyed through cues the individual is able to sense. And, through cognitive mechanisms not fully understood, the subject's performance is affected, with results that are lower than otherwise possible.

The social psychologist Claude Steele was one of the first to study this phenomenon in the context of the SAT gap between white and black students. He introduced the concept of stereotype threat and documented its workings in a range of contexts (link; 1997). A crucial element of the research is the discovery that the negative cues do not need to be particularly overt or explicit; small elements of body language, verbal phrasing, or facial expression seem to be enough to significantly lower performance.


Negative stereotypes about women and African Americans bear on important academic abilities. Thus, for members of these groups who are identified with domains in which these stereotypes apply, the threat of these stereotypes can be sharply felt and, in several ways, hampers their achievement. First, if the threat is experienced in the midst of a domain performance -- classroom presentation or test-taking, for example -- the emotional reaction it causes could directly interfere with performance.... Second, when this threat becomes chronic in a situation, as for the woman who spends considerable time in a competitive, male-oriented math environment, it can pressure disidentification, a reconceptualization of the self and onf one's values so as to remove the domain as a self-identity, as a basis of self-evaluation. (614)

Key in Steele's work is the role that "self-identification" plays in learning and performance: the way that the child or young person thinks about his or her capabilities and talents is itself a key element in determining the level of performance that he or she will achieve.

Social psychologist Carol Dweck has contributed a great deal to this field through her research on the social and emotional influences on cognitive development. She and colleagues argue for a new hybrid field of research, "social cognitive development". Her paper with Kristina Olson, "A Blueprint for Social Cognitive Development" (2008), lays out the central features of this approach. Particularly important in this approach is the importance these researchers give to the role of the mental frameworks through which people navigate the world and solve the problems they encounter.

Olson and Dweck highlight four key goals for research in social cognitive development studies:
This is a crucial theoretical innovation, because it insists on what we have previously called an "actor-centered" approach to behavior. What is the mental framework on the basis of which the individual acts? Olson and Dweck consider examples of aggression and achievement motivation and demonstrate how beliefs and mental frameworks influence the child's dispositions to behavior in various circumstances.

Another important body of research on this topic comes from the field of career and educational choices. An earlier post highlighted career choice -- the idea that certain professions or careers are "typed" for particular profiles of gender, race, and political beliefs (link). This typing is conveyed through broad cultural motifs, and it gets inside the heads of young people at a level that is almost below the level of conscious awareness. Elizabeth Armstrong and Laura Hamilton's work aimed at decoding of the educational choices made by women of different socioeconomic segments illustrates a related phenomenon (link). Armstrong and Hamilton demonstrate that women at MU are tracked into different pathways of education and career opportunity, depending on the socioeconomic status of their families.

A third relevant area of research on this topic comes from a different field, the study of the social components of blindness. Robert Scott, a sociologist who focused on the institutions supporting the needs of blind people in The Making of Blind Men, argued that a large part of the mobility limitations experienced by visually impaired people derives from the script of disability that sighted society insists upon. A fascinating case study is Daniel Kish, the blind bicyclist. (This story was highlighted in a recent episode of the podcast Invisibilia; link.) The key finding is this: if most of us, including the parents and teachers of sight-impaired children, believe that blindness means dependency and highly limited mobility, then this will be the reality for blind children and adults. But if the assumption is that sight-impaired people can develop alternative means of navigating their environments ( like the tongue-clicking system that Kish developed as a child) then a very different form of life will result for the sight-impaired.

In each of these areas of research, it is striking to find how sensitive capabilities and performance are to social expectations. Low or negative expectations cause poor performance. These findings underline how sensitive human beings are to the expectations other people have of us when it comes to development and performance. Second, these findings provide a basis for understanding some important differences in performance that exist along gender, racial, and ethnic lines. And they pose very tough challenges to teachers of young children; how can preschool and early childhood teachers assure themselves that their own hidden stereotypes about the children they teach do not wind up hampering the child's development? In a racialized and genderized society that is laden with stereotypes, how can we ensure that learning environments will bring out the best in every child?

But universities too need to worry about this phenomenon. Do engineering and math faculty give off subtle cues about their expectations of low performance by young women? Do programs aimed at supporting the academic success of educationally disadvantaged students -- often a racialized group -- give rise to diffuse assumptions among faculty that these students have lower potential for excellence? Does a visibly blue-collar student receive subtle cues that graduate studies are not a good choice for him or her? And, given the emerging research showing how stereotype and expectation dramatically influence performance and choice, how can we work to offset these mechanisms in order to provide a genuinely equal quality of education and career advice to all students?