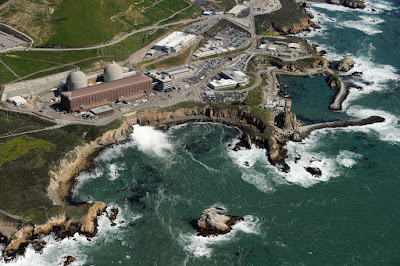 Readers may be skeptical about the practical importance of the topic of nuclear power plant siting decisions, since very few new nuclear plants have been proposed or approved in the United States for decades. However, the topic is one for which there is an extensive historical record, and it is a process that illuminates the challenge for government to balance risk and benefit, private gain and public cost.  Moreover, siting inherently brings up issues that are both of concern to the public in general (throughout a state or region of the country) and to the citizens who live in close proximity to the recommended site. The NIMBY problem is unavoidable -- it is someone's backyard, and it is a worrisome neighbor. So this is a good case in terms of which to think creatively about the responsibilities of government for ensuring the public good in the face of risky private activity, and the detailed institutions of regulation and oversight that would work to make wise public outcomes more likely.

I've been thinking quite a bit recently about technology failure, government regulation, and risky technologies, and there is a lot to learn about these subjects by looking at the history of nuclear power in the United States. Two books in particular have been interesting to me. Neither is particularly recent, but both shed valuable light on the public-policy context of nuclear decision-making. The first is Joan Aron's account of the processes that led to the cancellation of the Shoreham nuclear power plant on Long Island in the 1970s (Licensed To Kill?: The Nuclear Regulatory Commission and the Shoreham Power Plant) and the second is Donald Stever, Jr.'s account of the licensing process for the Seabrook nuclear power plant in Seabrook and The Nuclear Regulatory Commission: The Licensing of a Nuclear Power Plant. Both are fascinating books and well worthy of study as a window into government decision-making and regulation. Stever's book is especially interesting because it is a highly capable analysis of the licensing process, both at the state level and at the level of the NRC, and because Stever himself was a participant. As an assistant attorney general in New Hampshire he was assigned the role of Counsel for the Public throughout the process in New Hampshire.

Joan Aron’s 1997 book Licensed to Kill? is a detailed case study the effort to establish the Shoreham nuclear power plant on Long Island in the 1980s. LILCO had proposed the plant to respond to rising demand for electricity on Long Island as population and energy use rose. And Long Island is a long, narrow island on which traffic congestion at certain times of day is legendary. Evacuation planning was both crucial and in the end, perhaps impossible.

This is an intriguing story, because it led eventually to the cancellation of the operating license for the plant by the NRC after completion of the plant. And the cancellation resulted largely from the effectiveness of public opposition and interest-group political pressure. Aron provides a detailed account of the decisions made by the public utility company LILCO, the AEC and NRC, New York state and local authorities, and citizen activist groups that led to the costliest failed investment in the history of nuclear power in the United States.

In 1991 the NRC made the decision to rescind the operating license for the Shoreham plant, after completion at a cost of over $5 billion but before it had generated a kilowatt of electricity.

Aron’s basic finding is that the project collapsed in costly fiasco because of a loss of trust among the diverse stakeholders: LILCO, the Long Island public, state and local agencies and officials, scientific experts, and the Nuclear Regulatory Commission. The Long Island tabloid Newsday played a role as well, sensationalizing every step of the process and contributing to public distrust of the process. Aron finds that the NRC and LILCO underestimated the need for full analysis of safety and emergency preparedness issues raised by the plant’s design, including the issue of evacuation from a largely inaccessible island full of two million people in the event of disaster. LILCO’s decision to upscale the capacity of the plant in the middle of the process contributed to the failure as well. And the occurrence of the Three Mile Island disaster in 1979 gave new urgency to the concerns experienced by citizens living within fifty miles of the Shoreham site about the risks of a nuclear plant.


As we have seen, Shoreham failed to operate because of intense public opposition, in which the governor played a key role, inspired in part by the utility’s management incompetence and distrust of the NRC. Inefficiencies in the NRC licensing process were largely irrelevant to the outcome. The public by and large ignored NRC’s findings and took the nonsafety of the plant for granted. (131)

The most influential issue was public safety: would it be possible to perform an orderly evacuation of the population near the plant in the event of a serious emergency? Clarke and Perrow (included in Helmut Anheier, ed., When Things Go Wrong: Organizational Failures and Breakdowns) provide an extensive analysis of the failures that occurred during tests of the emergency evacuation plan designed by LILCO. As they demonstrate, the errors that occurred during the evacuation test were both “normal” and potentially deadly.

One thing that comes out of both books is the fact that the commissioning and regulatory processes are far from ideal examples of the rational development of sound public policy. Rather, business interests, institutional shortcomings, lack of procedural knowledge by committee chairs, and dozens of other factors lead to outcomes that appear to fall far short of what the public needs. But in addition to ordinary intrusions into otherwise rational policy deliberations, there are other reasons to believe that decision-making is more complicated and less rational than a simple model of rational public policy formation would suggest. Every decision-maker brings a set of “framing assumptions” about the reality concerning which he or she is deliberating. These framing assumptions impose an unavoidable kind of cognitive bias into collective decision-making. A business executive brings a worldview to the question of regulation of risk that is quite different from that of an ecologist or an environmental activist. This is different from the point often made about self-interest; our framing assumptions do not feel like expressions of self-interest, but rather simply secure convictions about how the world works and what is important in the world. This is one reason why the work of social scientists like Scott Page (The Difference: How the Power of Diversity Creates Better Groups, Firms, Schools, and Societies) on the value of diversity in problem-solving and decision-making is so important: by bringing multiple perspectives and cognitive frames to a problem, we are more likely to get a balanced decision that gives appropriate weight to the legitimate interests and concerns of all involved.

Here is an interesting concrete illustration of cognitive bias (with a generous measure of self-interest as well) in Stever’s discussion of siting decisions for nuclear power plants:


From the time a utility makes the critical in-house decision to choose a site, any further study of alternatives is necessarily negative in approach. Once sufficient corporate assets have been sunk into the chosen site to produce data adequate for state site review, the company's management has a large enough stake in it to resist suggestions that a full study of site alternatives be undertaken as a part of the state (or for that matter as a part of the NEPA) review process. hence, the company's methodological approach to evaluating alternates to the chosen site will always be oriented toward the desired conclusion that the chosen site is superior. (Stever 1980 : 30)

This is the bias of sunk costs, both inside the organization and in the cognitive frames of independent decision makers in state agencies.

Stever’s central point here is a very important one: the pace of site selection favors the energy company’s choices over the concerns and preferences of affected groups because the company is in a position to have dedicated substantial resources to development of the preferred site proposal. Likewise, scientific experts have a difficult time making their concerns about habitat or traffic flow heard in the context.

But here is a crucial thing to observe: the siting decision is only one of dozens in the development of a new power plant, which is itself only one of hundreds of government / business decisions made every year. What Stever describes is a structural bias in the regulatory process, not a one-off flaw. At its bottom, this is the task that government faces when considering the creation of a new nuclear power plant: “to assess the various public and private costs and benefits of a site proposed by a utility” (32); and Stever’s analysis makes it doubtful that existing public processes do this in a consistent and effective way. Stever argues that government needs to have more of a role in site selection, not less, as pro-market advocates demand: “The kind of social and environmental cost accounting required for a balanced initial assessment of, and development of, alternative sites should be done by a public body acting not as a reviewer of private choices, but as an active planner” (32). 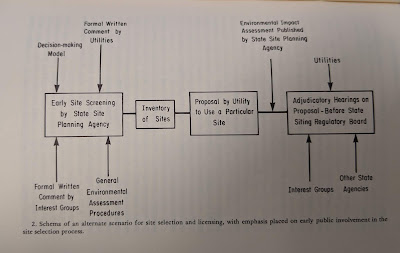 Notice how this scheme shifts the pace and process from the company to the relevant state agency. The preliminary site selection and screening is done by a state site planning agency, with input then invited from the utilities companies, interest groups, and a formal environmental assessment. This places the power squarely in the hands of the government agency rather than the private owner of the plant -- reflecting the overriding interest the public has in ensuring health, safety, and environmental controls.


Stever closes a chapter on regulatory issues with these cogent recommendations (38-39):
(It is very interesting to me that I have not been able to locate a full organizational study of the Nuclear Regulatory Commission itself.)
Posted by Dan Little at 5:11 PM