The Kerala dialogue on COVID-19 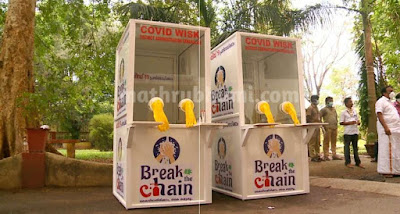 The Indian state of Kerala has taken an especially active approach to responding to the COVID-19 pandemic. Kerala, a state of more than 33 million people, is governed by the Left Democratic Front, having won state elections in 2016. LDF is a coalition of left-leaning parties, led by the Communist Party of India-Marxist and the Communist Party of India. The Kerala government has been consistently focused on equity and progress for the poorest sectors of Kerala society. Significantly, the government's efforts in response to the COVID-19 crisis have fallen into the arenas of both public health and social wellbeing. The government quickly implemented public health strategies recommended by the WHO for responding -- test, trace, quarantine -- very early in the pandemic in Kerala, more quickly and consistently than the national government. Here is a nice summary by Sonia Faleiro in MIT Technology Review (link).

In Kerala, a different style of leadership was on display. With 15 cases now confirmed across the state, Pinarayi Vijayan, the chief minister, ordered a lockdown, shutting schools, banning large gatherings, and advising against visiting places of worship. He held daily media briefings, got internet service providers to boost capacity to meet the demands of those now working from home, stepped up production of hand sanitizer and face masks, had food delivered to schoolchildren reliant on free meals, and set up a mental health help line. His actions assuaged the public’s fears and built trust. 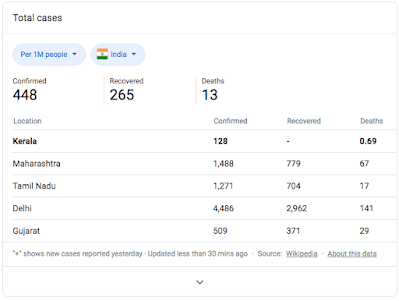 A crucial part of the success in Kerala in limiting the impact of the pandemic was the government's early recognition that the pandemic would have disastrous consequences for poor people in the state. The government implemented emergency programs of food and stipends to offset the economic disruptions created by the epidemic. Faleiro describes the social sustenance program implemented in Kerala in these terms:

Vijayan, the state’s chief minister, was the first in the country to announce a relief package. He declared a community kitchen scheme to feed the public, and free provisions including rice, oil, and spices. He even moved up the date of state pension payments. (link)

Earlier this month the government of Kerala hosted a dialogue on the COVID-19 crisis involving extensive discussions with Noam Chomsky Amartya Sen, and Dr. Soumya Swaminathan, Chief Scientist of the World Health Organization. V.K. Ramachandran, vice-chairman of the Kerala State Planning Board, conducted fascinating conversations with Chomsky and Sen, and distinguished journalist N. Ram conducted an excellent conversation with Dr. Swaminathan. Links to the dialogues are provided below, and they are all worth viewing. A very good summary of the dialogues is provided in The Hindu here.
Here are a few highlights. Dr. Swaminathan provides a clear, scientifically precise summary of current knowledge about the virus and the best advice available for public health measures to contain its spread. Chomsky points out the connections he sees between the ideological and material commitments of neoliberal governments to corporate profits and their failure to respond adequately to the crisis. The United States government's actions during this crisis are especially egregious -- virtually no effective national policy, on the one hand, and a rush to loosen a raft of environmental regulations during the crisis, on the other. Chomsky underlines the magnifying effects that racial and economic inequalities have had on the distribution of cases and deaths across the population in the United States. He reminds viewers that, terrible as the immediate consequences of the COVID crisis are, the effects of global climate change will be immeasurably worse. Amartya Sen applauds the Kerala government's consistent attention to the immediate welfare and nutrition crisis threatened by the COVID pandemic, and notes how crucial it is for government policy to be attuned to hunger and entitlement shortfall for vulnerable populations. In this respect the COVID crisis has a lot in common with the Bengal famine of 1943, when a sudden collapse of entitlements for poor people led to massive deprivation and eventually starvation (Poverty and Famines: An Essay on Entitlement and Deprivation).
Sen and Chomsky have devoted their careers to offering analysis and critique of government policy, and it is very interesting to see how they both respond to the largest public health crisis that we have seen in a century. What is especially important from the Kerala experience, it seems, is that the policy values that a government implements have enormous consequences for the wellbeing, health, and safety of the populations that they serve (or fail to serve). Chomsky's basic view of most liberal democracies is that their policy values are chiefly oriented to the needs of big business, and that this leads to huge inequalities in normal times and in pandemic crisis. Sen has made the case throughout his career that governments should choose policies based on their impact on broad social welfare, not GDP or the stock market. And Kerala presents a fantastic test case: the LDF is a government that is distinctly not beholden to large corporations, it is committed to the welfare of the broad population, and its policies have been highly successful during this crisis in ways that benefit the whole of Kerala society.
Here are the videos.
The Kerala Dialogue on Covid-19

Professor V. K. Ramachadran, the vice-chairman of the Kerala State Planning Board, conducted the interviews with Chomsky and Sen. His work as a development economist at the Indian Statistical Institute in Bangalore is discussed here, here, and here.
N. Ram, a distinguished journalist whose work is discussed here, conducts the interview with Dr Soumya Swaminathan, Chief Scientist of the World Health Organization.
Posted by Dan Little at 9:37 AM